The Curlew calling and Piper piping

Perhaps one of the most iconic calls of nature that inspires a feeling of wildness in the UK belongs to the Curlew. This weekend I was to have a an encounter with these birds locally, but before I start let me share some information about Curlews to give my readers some perspective.

The call of a Curlew is now unfortunately becoming a rare sound to hear, especially at this time of year when Curlews breed. The UK breeding population of Curlew's has hugely declined. There are a number of reports that discuss the cause of it and if you are interested I encourage you to read an article on the BTO website and a scientific Bird Study publication . In summary the publication (1)  found intensive farm practises, increasing predator populations, population changes and climate change were impacting Curlews in a bad way.

It appears from what I understand that these iconic waders are very sensitive to change and don't adapt to it very well at all.

My weekend started with me eager to get out and explore the countryside. I started out just after dawn and took a walk along the River Usk in Abergavenny.

It was a lovely summery morning. The countryside was full of the noise of birds enthusiastically singing and the air had that fabulous crispy freshness to it which makes you feel like taking a deep breath of it and filling your lungs with good healthy air.

As I progressed through dew covered grassy fields  I was surprised to hear the call of a Curlew nearby. A few moments later the distinctive  call was louder and much closer.I was then treated to a flypast over my head with the bird calling as it did so.

What an encouraging start to a mornings bird watch that was.

After an hour of scouting  around fields in the vicinity of my sighting, I tracked the Curlew down to a field.

It was feeding and was not alone. A second Curlew was with it. I watched them for a while before they got spooked and flew away. I would see them again several times later in the morning. 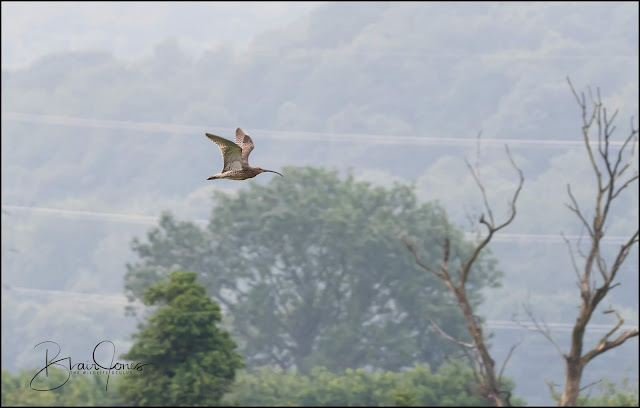 The river was full of bird life. I saw Pied Wagtails, Grey Wagtails, Pheasants , Swans, Herons and Mallard Ducks as made progress through the fields along the river. Sand Martins were hurtling through the skies and diving down into a steep sided sandy part of the river bank.

These migrant birds are a joy to watch but awkward as hell to photograph. I must confess I left them to it as I had a different bird in mind to photograph . My target was a  small wading bird that has quite a distinctive call itself once you are familiar with it.

Creeping along the river bank and sometimes crawling through the bushes and nettles I was following  the sharp high pitched "swee swee" call of Common Sandpipers.  These small wading birds often live and breed along rivers far from estuary's where they are often seen in Winter.

I find the Sandpipers to be very skittish to get close to. Annoyingly so sometimes, as they have a habit of teasing me with a good photo opportunity before flying off rapidly up stream alarming just about every bird on the river of my existence.

My methods of  crawling over pebble beaches and getting stung by nettles and scagged by brambles that were in my path resulted in some success. Eventually I got in close enough range to a number of  Common Sandpipers that must have taken a does of "brave medicine" as they did not fly off in a hurry as usual.

The Sandpipers have a lot of character and I spent most of my time watching them rather than trying to take a photograph so I caused as little disturbance as possible.


I must admit the Common Sandpipers were very active and the most I have seen for a long time.

It was a good mornings bird watch.