I have been yearning for the Welsh Government to end the five-mile "stay local" travel limit. Finally, on the weekend, they announced that the limit would be lifted from Monday the 6th of July 2020.  I did not particularly want to travel very far and had only one place in mind, beloved Goldcliff Lagoons.
Monday morning I had some family things to sort out but by the afternoon I was free to make my way to the reserve.
The sun was shining and the wind was blowing as I entered the reserve. It was good to be back on my patch. The one species of birds I have missed watching over lockdown has been waders. I fell in love with them a few years back and I never tire of watching them.
I heard a commotion in the sky as I approached hide 1 and looked up to see the sky fill with a large flock of waders that were piping alarm calls right left and center before they disappeared from view. Rising up above the hide next was a Marsh Harrier looking very menacing and its swooped away across the reserve out of my sight. What a great start that was.
The Hides currently have notice's on them stating that they are closed, despite hides 1 and 3 being open. Hopefully, soon the NRW will "officially" open them up to the public again. As long as visitors keep a respectful 2 meters apart I don't see an issue.
Walking around the reserve it was quiet on the lagoons themselves. I caught sight of the Marshy again cruising over the sea wall towards the pill and watched the flock of waders vanish over the seawall heading towards the foreshore.
I followed after them and eventually sat on the seawall basking in a nice bit of sunshine and observed the wader flock that now were feeding on the mud.
The flock of waders consisted of over 100 Black Tailed Godwits  with about 7 Knot mixed in with them
After about an hour the flock suddenly decided to move and flew en masse back over the seawall and landed in Priors Lagoon.
I headed down towards them to try and get a glimpse of them a little closer. On doing so a Buzzard came from now where and caused the waders to panic. Up they went swirling around right in front of me before deciding to head back to the mud again.
It was absolutely great to watch and was my highlight of Monday's visit. It was good to be back.
My next visit was Tuesday morning when got up at stupid o'clock and met up at dawn with my birding pals Paul Joy and Nicola Johns.
No two days are ever the same on the levels. On Monday I had some fine weather less than 24hrs later on Tuesday it was like a winters day. There was a chilling wind blowing and a thin layer of cloud with very little chance of us seeing any sort of sunrise. We did get to see the sun briefly but for most of the morning, it was a complete stranger.
We sat up on my favorite platform - Redshank. The wader flock had settled on Monks lagoon and had been joined by a roost of Black Headed Gulls.
The Black-Tailed Godwits  (BTG) and Knots were showing well. The BTG were sporting some fine breeding plumage. One of the Knots was also looking rather colorful. Mixed in with the Black-Headed Gulls was a single Mediterranean Gull.
Other wader species such as  Dunlins, Turnstones, Oystercatchers, Lapwings  Avocets, and Redshanks joined the larger wader flock on Monks Lagoon. It's really nice to see a variety of species at high tide choosing to roost on the reserve.
There was no sign of Flossy the Glossy Ibis. My friend Neville Davies had reported seeing the Ibis early on Monday morning roosting in Priors Lagoons before it flew off towards Uskmouth.
We did notice that there were plenty of Little Egrets on the reserve. At one point five were present on Monks Lagoon. Fish numbers must be good at the moment in the pools.
My highlight of this visit was meeting up with my birding amigos and John " The Video Man" Lawton who I have seen little or nothing of since lockdown.
Today I popped down the lagoons for a quick visit at high tide.
Again the waders were out in force. Most notably were that the Turnstones were back in greater numbers ( at least 8) roosting on the mud and well camouflaged making them difficult to spot.
The stand out bird, from today's visit, was the sighting of a Spoonbill that had dropped into the lagoons.
Spoonbills are occasional visitors to Goldcliff Lagoons and seem to be turning up more regularly. A keen-eyed birder picked it up first on Priors Lagoon. It was then seen flying over towards Bec Lagoon where it settled for a while. Later it moved back to Priors and I had time to watch it for a while feeding enthusiastically. It eventually caught a fish and greedily swallowed it down once it had juggled it a little in its beak. 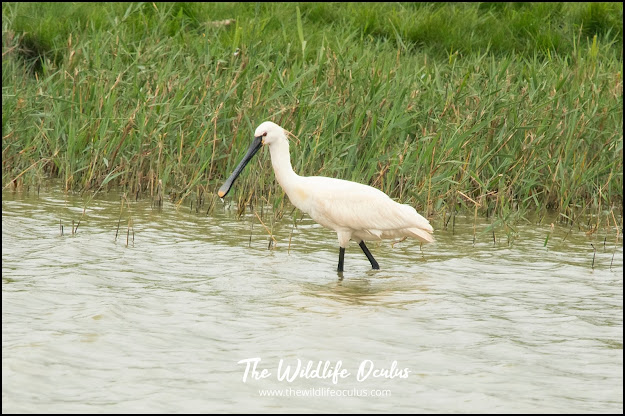 Well, it has been a great return to Goldcliff Lagoons and from what I have seen so far, things bode well for the lead up to the Autumn Passage.
Labels: Black Tailed Godwit Goldcliff Lagoons Marsh Harrier Spoonbill