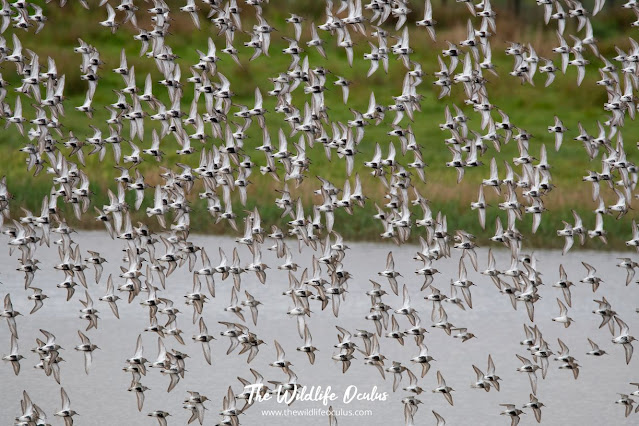 All week I have been reading the reports of huge numbers of Dunlins flocking at Goldcliff Lagoons. There has been some incredible pictures of these small waders spread across Monks Lagoon that have really left me green with envy.

Probably one of my favourite forms of bird photography involves capturing shots of large wader flocks. I just love the amazing feats of synchronised flying that waders can perform. They make the "Red Arrows" look like a bunch of amateurs in comparison, as the wader air displays you get to watch at Goldcliff often involve hundreds of birds.

I call the month of May "Dunlin Season", because it's that time during Spring passage ,when these little waders congregate on the lagoons in order to prepare for their long flights to Iceland, Greenland and Northern Scandinavia. I have been photographing at Goldcliff regularly now for over three years and they start to amass on the lagoons almost like clockwork every year - they really are creatures of habit ( just like me as I have been doing the same thing photographing them every May ;) )

The most numerous race in the UK is the alpina race. They will migrate to Northern Scandinavia and perhaps even as far as Russia.
Next in line is the schinzii race . They breed in Greenland, Iceland and Norway. These birds don't tend to winter in the UK as they are moving up from Western Africa and are stopping over in the UK as they migrate North.
The last race - arctica in comparison to the others is the smallest in numbers. Arctica's fly to Northern Greenland and Svalbard.
I don't yet have the required level of identification experience to be confident scrutinising the Dunlins observed at Goldcliff Lagoons but I would hazard a guess that there may be all three races present during spring passage.
Having done some research about these Starling sized waders, it is amazing to think that they can live almost for thirty years. The mind boggles at the mileage these birds must rack up throughout their life times.
Everything about these birds is busy and done quickly. They fly rapidly and usually the only time you notice them is when you see a flash of white as they turn and sweep in to roost on the lagoons. On landing they are all of a fuss, jostling for a position amongst the flock , feeding quickly and then preening frantically. Take a look at the video below . Its a clip showing the wader flock that consists of Dunlins , Ringed Plover and Turnstones.
They will then settle for a time to rest and can in a fraction for second explode into a synchronised flight routine speeding rapidly twisting and turning around the lagoons to evade predators. After whizzing around like mad things the Dunlins eventually settle again back into their chosen spot to roost again. They usually only gather in large numbers on the lagoons at high tide. At any other time they will feed on the exposed mud flats of the Severn Estuary which is so rich with invertebrate food that they eat.
Over the last couple of days I have made the most of the "Dunlin Season" and been thrilled by the great birding at the reserve.
Mixed in with the Dunlins have been Sanderlings, Knot, Curlew Sandpiper, Turnstones and Ringed Plovers. The sheer numbers has been quite a sight at times.
In addition to the Dunlins there has also been some other passage visitors. On Saturday Grey Plovers were sighted on Becs and Monks Lagoons.  They were often in the company of Bar-tailed Godwits. I was pleased to get some nice photographs of both species in flight.
A small flock of Black-Tailed Godwits remain on the reserve and are frequently seen on Becs Lagoon. Whimbrel continue to pass through and I have seem one every day this weekend.
Overhead the skies have been full of Swallows, House Martins, Sand Martins and Swifts. There has been a marked increase this week of these spring visitors arriving. On Saturday morning I enjoyed watching Swallows and Sand Martins perching on the reeds of Becs. Even better were the Swallows flying at almost stalling speed in front of the Avocet Hide ( seawall hide) catching small insects. just above the grass during a rain shower. 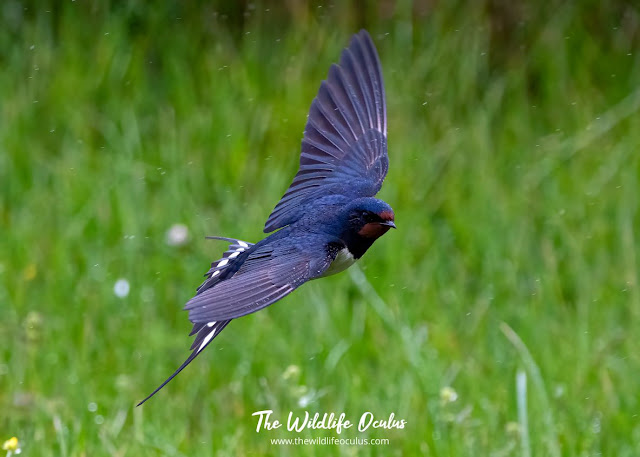 Elsewhere on the reserve there has been plenty of things happening. The hedgerows , reens and just about any patch of undergrowth are alive with breeding passerines and the sound of them singing to defend their territories. Cettis and Reed Warblers sing from the reen areas but the one species that has caught my attention most this weekend has been the Common Whitethroats perched up on top of bramble bushes and Hawthorns blasting out their tunes.
It been fantastic to think that I can sit in hide watching thousands of waders and be serenaded at the same time by a Common Whitethroat that likes to sing close to the hide in the morning.
Soon the Dunlin flock will suddenly decide the time is right to head North to their breeding grounds.  What will help them make up their minds will be partly instinct and partly if the weather is favourable for their long flights. they should all be gone by around the first week of June I think.
I would love to follow them and see them at their breeding sites. What little I do know about what happens when they get there is that they will mate - they are monogamous which means they have only one mate at a time. They have clutches of four eggs and incubate them for 24 days. Dunlins lay large eggs. Its though that this is to ensure that the checks when they hatch are quite advanced in development as they need to fledge quickly and migrate south as soon as possible. I believe this is probably because summers are short in the Northern Hemisphere. The female birds leave before the chicks have fledged and the males remain longer. The chicks after about 24 days will be able to fly and they will then feed up and head south to their wintering grounds.
The whole breeding cycle is over in about two months and by August the Dunlins will be returning to Goldcliff again in good numbers either to winter or as a stop on their migration routes further South.
So, if you want to see nice big flocks of Dunlins the clock is ticking and you had better pay the reserve a visit before they up sticks and head North to breed.
Further Reading (Books where I got some of my reference material from)-
All the above are excellent books.
This week I am going to give a shout out to my friend Dick (Richard Turner). I met up with him on Saturday morning and enjoyed a pleasant couple of hours chatting whilst walking around the reserve. Dick is a fellow blogger like myself and he publishes some great posts on his blog that can be found at click here which I recommend to my followers as a good read.
Labels: Bar-Tailed Godwit Black Tailed Godwit Common Ringed Plovers Common Whitethroat Dunlin Season Dunlins Goldcliff Lagoons Sanderling