Sunrise up the Folly 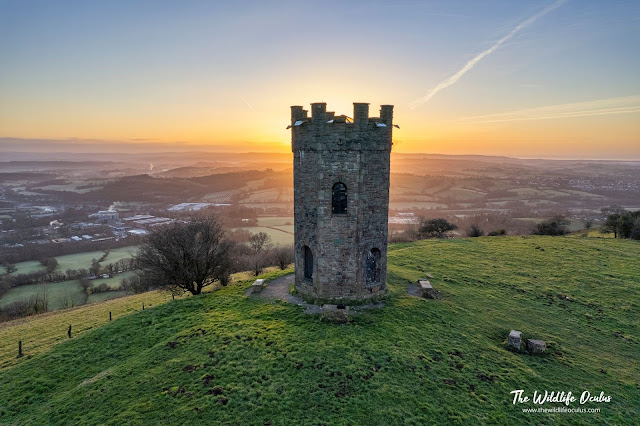 2022 has started to be a very busy year for me and I have not had the opportunity to visit one of my favourite local patches - the Pontypool Folly.

Last year many of my readers will recall I posted quite a few pictures concerning my adventures up at the Folly and during a period of snow in January 2021, I captured some nice pictures - one of them eventually being a competition winner.

This weekend was the first time I have had the chance to get up there and perhaps it's because I am getting old, I decided to drive up there instead of walking up. I am either getting lazier than last year or just more tired after a week of work.

In fact, tiredness was a big factor because the evening before I had been doing some Astro and night photography with my friend Paul Coombes and did not get back from Blaenavon until late. It was worth it though as I managed to get some cool pictures including a shot of the Milky Way.

So when I got up the Folly on Sunday morning I was knackered and feeling rather fragile -just like I used to feel after working a continental double back shift.  To lift my spirits though was the smiley face of my friend Paul Joy, aka "The Happy One" who I met up there.

Looking out across to the eastern horizon there was a band of clouds that looked a little ominous. I hoped the early start would end up in a good sunrise as much of the sky elsewhere was clear.

The sky was turning some fantastic colours. A band of orange was spreading eastwards despite the clouds that were threatening to obscure the rising sun. To the North West, the skies had turned a fabulous pinky-purple colour known as the belt of venus. 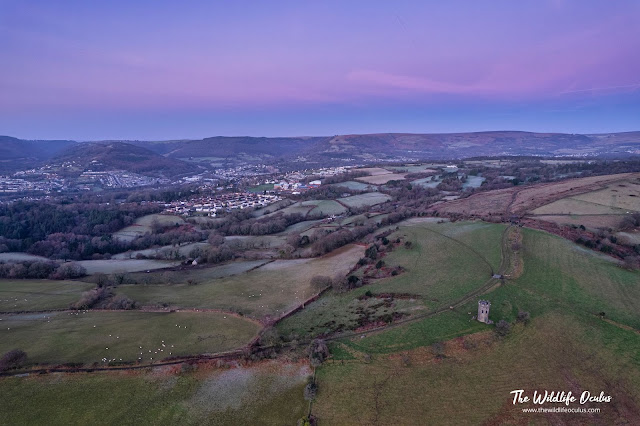 The colour is caused by lights shining through dense parts of the earth's atmosphere and light being reflected off opposite ends of the sky which causes banding of pink and darker blues.

Paul and I experimented with different photo setups. He was trying out a new lens filter, I was using the wide-angle Astro lens and also had my drone with me.

Mr Joy was delighted with his new filter and was busy taking some fantastic pictures. I have included one he took of me with the belt of venus behind me as a background.

I was very eager to get the drone up as time went on as the weather was improving by the minute and the sun was on its way. Things were looking promising.

Up went the drone into the sky. As it gained height I got the jump over Paul on the sunrise. At 60 meters and higher, I could see the sun just starting to rise up above the clouds on the horizon.

Excitedly I told Paul to get ready and shouted "here it comes".

Then in a blink of an eye, a big fireball began to rise up and the whole sky turned a vivid orange. Dawn was upon us.

It was great to watch my first Welsh dawn of 2022  with my friend up the Folly. I love watching the sunrise. The morning's sun rays seemed to burn away any tiredness or stress I was feeling and for a while any worries or anxiety I have had were forgotten in those moments.

I must admit the sunrise was a lot better than I had expected. Getting up again at stupid o'clock had been worth the effort yet again.

I am going to finish off this blog post with one of Pauls great photos. It was one of the first he took that morning as we walked towards the Folly with big smiley excited faces. The colours are amazing.