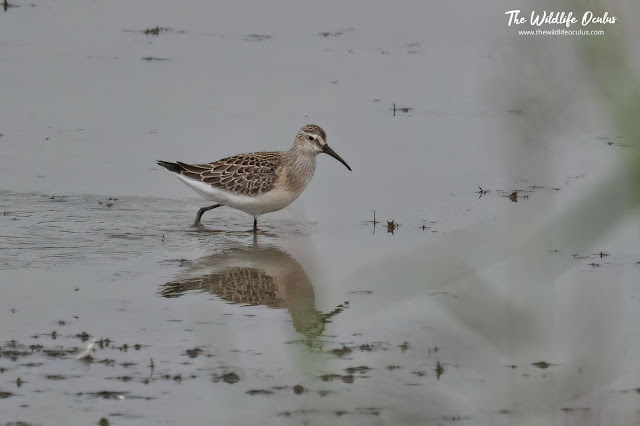 There is a genus of birds called Calidris. It is said that the word comes from ancient Greek, and the Greek Philosopher Aristotle bestowed this "description" on grey-coloured birds found near the waterside.

In fact, Calidris is just the genus name for several small wader species that are sometimes found in the United Kingdom and elsewhere around the world - species such as Sandpipers, Dunlins, Stints and Sanderlings for example.

Today at Goldcliff Lagoons I was very fortunate to see a few of these species as they stopped at the lagoons whilst making autumn passage migration journeys. As only Priors Lagoon has water, it's having the effect of concentrating all the birds in one place and also providing us with some closer views.

If I am honest they are anything but just grey-coloured.

On Priors Lagoons the first Calidris that was spotted was a Little Stint (Calidris minuta). Now this wader is quite tiny. It was showing well, a bit distant to begin with but later it came closer to the Snipe Platform where I was located with my fellow birdwatching pals.

The next Calidris species observed were a pair of Curlew Sandpipers ( Calidris ferruginea). They both looked like juvenile birds. We were treated to very close views by Goldcliff's standards. Later we would see a further two birds and there are reports of up to eight of these birds later.

My final species of Calidris seen today was a small flock of Knots ( Calidris canutus) - also known as the Red Knot - as they have lovely brick red plumage when in breeding plumage in the Arctic!

All of us birders were hoping for a fourth species of Calidris- a Baird's Sandpiper (Calidris bairdii). This bird breeds in the Arctic of North America and is what twitchers call a "yanky bird". Sometimes immature birds get lost on their migration to South America and turn up in the UK. In November  2018 we had such a visitor and I wrote a blog documenting that sighting - read here.

There had been a couple of reports on Friday evening of one of these Bairds having been seen on Priors Lagoon.

However, despite a lot of searching, we could not find this rare visitor to our reserve.

In addition to the Calidris, there were plenty of other species to watch.

The reserve was graced later by four close relatives of the Blackwits dropping into Priors Lagoon. Four Bar-Tailed Godwits descended from the skies and landed not too far away from the Snipe Platform.  Barwits in terms of numbers are a lot more scarcely seen than Blackwits. They are quite similar birds but once you get familiar with some of their key identifying features you can tell both species apart.

I was able to quickly grab a picture of one of the Barwits flying away and the bars on its tail can be seen.

The reserve was quite busy today with lots of birds and plenty of bird watchers and good company from a number of the Goldcliff regulars. I really enjoyed the chats and banter today.

Despite a very cloudy and at times wet morning before dawn, the sunrise was quite special. The rising sun burned through its shroud of cloud and looked quite spectacular.