A trip of a lifers time - Norfolk Birdwatching Part 1

The county of Norfolk is legendary amongst birders for being one of the best places in the United Kingdom to go bird watching. I had heard many a grand tale from fellow birders who have accompanied me in the hides at Goldcliff Lagoons and they all encouraged me to visit.

My friend Neville Davies offered to take me there on a trip and show me around for a few days. Nev is a respected birder with loads of knowledge and has been to Norfolk on many occasions. In recent months I have started turning him to the "dark side" and he purchased a new camera that has incredible zoom capabilities. His blog is worth a visit . "Togger Nev" as has become affectionately known, has certainly been putting it to good use and taken some excellent pictures.

I was hoping that the trip would produce some "lifers"( new birds I had not seen before). I was not going to be disappointed.

To keep the posts a little shorter I am going to post a series of posts starting today. We managed to pack a lot of birding in so rather than a huge blog post.

To say I was excited about this trip would be an understatement so after packing Nevs car with more camera equipment than the average Jessops store we headed off at "ridiculous o'clock" on Friday. Its a monster journey and took about 5 hours to reach our first stop - Titchwell Marshes.

This is a RSPB reserve and parking is free to members or pay and display for anyone else.
Its a large reserve with some fantastic hides. It comprises of large areas of Reed beds, Woodland, freshwater marshes, saltwater marshes, lagoons , sand dunes and a beach bordering the North Sea.
The rich habitat attracts hoards of birds throughout the year. My favourite bird if prey is a Marsh Harrier and almost as soon as we had set up in the Island hide along came a Marshy quartering the reeds directly in front of us.


In all we saw at least three birds in the air at one time. They appeared immune to the incessant mobbing from the Black Headed Gulls that were legion in number throughout the reserve.

The freshwater Marsh is home to a large colony of Black Headed Gulls. Best viewed from the Parrinder Hide the colony had hundreds of gulls nesting. In amongst them were a number of Mediterranean Gulls (Lifer no.1).


On the sandy islands bordering the hide were a Common ( Lifer no.2) and Sandwich Terns (Lifer no.3).

The Sandwich Terns were all paired up and it was great to watch them going through their mating rituals.

As we scanned the fresh water Marsh we noticed a small gull that was in with a flock of Black Headed Gulls. Taking a closer look it was found to be a Little Gull ( Lifer no.4).


As we walked towards the beach along the seawall a wave of Brent Geese (Lifer no.5) flew across the marshlands. These dark coloured geese are quite distinctive and they were in large numbers on the marshland.


The sandy beach at Titchwell is expansive. Bordered on one side by Dunes and on the other by the North Sea. On our visit it was windy but the sun came out as the tide went out. Amongst the rocks on the shoreline a Grey Plover in full breeding plumage stood out. Oystercatchers , Redshank and Turnstones scuttled over the rocks to feed.

I used a little field craft and crept close to the Turnstones and managed to get some close pictures without causing any disturbance. They are quite accommodating birds

I enjoyed the beach area the most. It afforded the best opportunity to get a little closer photography wise and the Grey Plover was truly beautiful.

Overall we saw or heard some 56 species of birds and I was impressed by this reserve.

Next stop on our journey was going to be  Cley. En-route Nev spotted a Marsh Harrier in a field. I jumped out of the car and watched it from the roadside hunting. It hovered, then dived and emerged out of the crop with its prey - I am mot at sure what it had caught - either a small mammal or a young bird. I was to discover that the whole area is like a Marsh Harrier heaven and you have a good chance of seeing them anywhere.

By the time we had arrived at Cley Beach the weather had turned quite nasty. The wind was blowing and a drizzle had started. The tide was right up and the waves were being whipped up against the beach. " Ideal" for sea watching said Nev!. We stood their in the shelter scanning the horizon and grey stormy sea. I looked for once like a proper birder. There was no chance I was going to be able take any pictures in this.

Out on the sea I saw a big flock of black birds  floating up and down with the waves. A closer look in the scope revealed them to be Common Scotters (Lifer no.6) a species of ocean ducks.  Gannets and Guillemots flew past in small flocks and we were soon joined on the beach by a flock of frisky Black Headed Gulls.

Then I spotted a large bird with a Grey head and a red throat. Nev confirmed it was Red-Throated Diver ( Lifer no.7).

The day was just getting better and better despite the weather, lifers were popping up everywhere.

Situated on the A149 and a few hundred yards past the visitor centre is a small car park from here you can walk out along the East Bank with marsh land and reeds on both sides until you reach a small hide at Arnold Marsh.

It was here that I saw my first Hares feeding in the shelter of the sea wall. Arnolds Marsh consists of a large pool of water and some of the species we watched included Bar Tailed Godwits, Knot, Black Tailed Godwits, Dunlins, Little Terns ( Lifer no.8) and Turnstones. 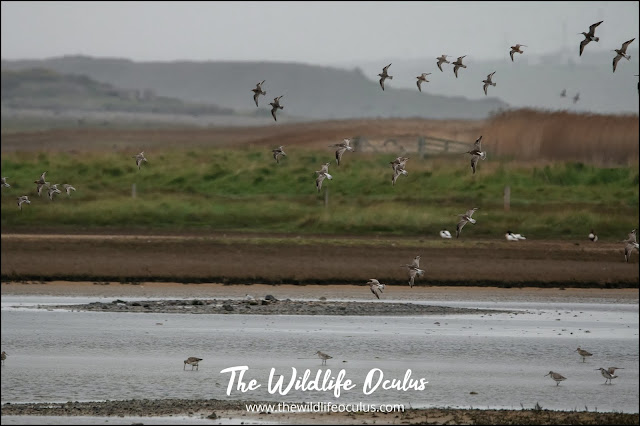 We would return here later on the weekend for something special but I will leave that for another post.

The best of the light was fading and the rain was getting worse so we headed off to our "digs" for the weekend. I had seen 8 lifers in one day, what a great start and it was only just the beginning.