Well I have managed a few visits this last week since my return from my birding trip to Norfolk.

Getting up early on Saturday rewarded me with quite a nice atmospheric sunrise. I had a welcome from all the sheep as usual - they all know my name "Blairrr Blairr" I am sure that is what they sound like :) 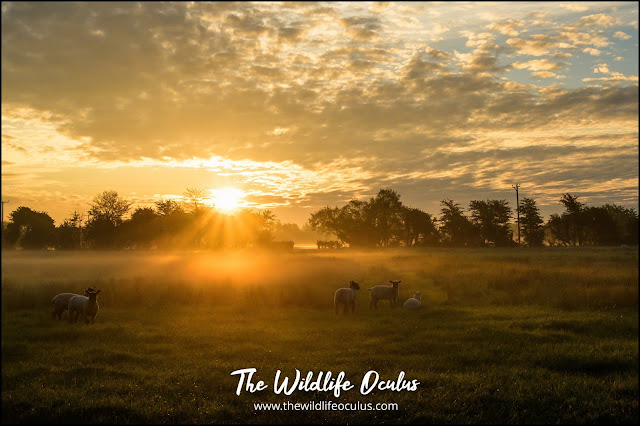 One major observation I have had is how low the water is getting. I fear that its starting to get low earlier than last years drought. Monks is low and lots of mud showing, Priors has the most water but is also getting low.  Becs water level is low with lots of mud now in front of the seawall hide.

I have seen quite a few wader chicks this week in relation to Avocet, Redshank, Oystercatcher and Ringed Plover. Not seen any lapwing chicks but I am assuming some of the chicks are keeping their heads down. I watched a pair of Avocets with 4 chicks in front of the seawall hide. The parents seemed to be keeping an eye out for them.

The Avocets and Lapwings continue to mob anything that looks remotely threatening - even other species of waders and geese. Avocets pound for pound are one of the bravest species of bird I have seen when mobbing.

Unfortunately today the waders on Becs Lagoon were systemically targeted by a family of Carrion Crows.

I watched a small flock of six Carrion Crows work there way along the sea wall generally causing a nuisance. Back and forth drawing the attention of the mobbing lapwings , Oystercatchers and Avocets.

They then split which caused havoc as the "defenders" got confused and did not know which way to turn next.  Another couple of crows hurtled low over a flock of Black Tailed Godwits that were on Becs. They were skittish and hurtled into the air. This caused even more problems for the defending birds and then out from behind them one of the Crows caught a chick when all the "defenders" backs were turned in all the chaos.

As things turned out the flock of crows was in fact two Adults and four  - what looked like recently fledged birds. One of the adults tore apart the chick  and fed it to the begging fledglings. I was  unable to ID what species the chick was but I suspect it was a"redshank" as the crow has been near to where I had seen them on the mud earlier on Becs.

The predation is all part of nature but I do hope some of the chicks fledge successfully this year. The crows tricked the defending waders amazingly well and shows how clever they are working as a team.

Its something that perhaps the Peregrines need to learn,as despite the falcons air superiority when one of them had a go at a flock of  roosting adult Dunlins it missed and just gave up flying away into the distance. 10 out of 10 for good reaction times to the Dunlins as fair play to them they took immediate evasive action and won out this time.

The Black-Tailed Godwits have been showing well throughout the week. I suspect these are non-breeders. They are a mixed bag of semi-breeding plumage and plain old winter colours.

Bar-Tailed Godwits have been showing up as well. The most I have seen is a flock of eight birds.
Its been good to see the differences between the two species and get some practice identifying them.

The Bar-Tailed have no white wing bars, a slightly upturned beak ,shorter legs and when in breeding plumage the chestnut brown stretches all the way down over their abdomen. I nearly forgot there last feature that helps identification - they have a  barred tail!


The problem with identification comes when they all decide to mix it up and roost together. That's when things get harder as they do look awfully similar to those unaccustomed with seeing these species regularly.

There has been some Knot and lovely Grey Plovers in full breeding plumage joining them from time to time at high tide.

Dunlins have been showing in numbers from 20 upto 200+ plus birds. Tuesday last week I a big flock of 200+ Ringed Plovers joined them on Monks lagoon. I also spotted some Sanderling on the weekend in with the Dunlins.


Overall there has been plenty to see at Goldcliff but I would say its been a little quiet.