There was good bird watching to be had at Goldcliff Lagoons on Saturday. High tide was around 9.30 am so it meant I did not have to get up to early for a change. The forecast was for cloud and I did not see any point in getting up at stupid o'clock for sunrise landscape pictures. In any case I was giving my friend Paul a lift to the Lagoons and we were planning a meet up with some of Goldcliffs regular Toggers/Birders. The social side is always good at the reserve and I enjoy a catch up with other photographers.

Over the last couple of weeks there has been lots of species of visiting the lagoons. Things are on the up at the moment and you can sense the lull in bird numbers ending as the autumn passage migration revs up into full spin.


The Common are on passage moving towards West Africa. The Green and Woods are heading towards Northern Africa and the Sahara. The Common are more likely to have bred in the UK but the Green has probably travelled from as far afield as the Arctic and Northern Europe where it breeds. Wood Sandpipers are rare breeders in Scotland but the birds we are seeing travelled from Northern Scandinavia -perhaps even Russia.

Amazing to think these three species all turn up at Goldcliff for a bit of a rest and pit stop before migrating South in September.

Priors Lagoon continues to be full of birds. Its very much looking like a green swamp at the moment with all the green algae. At the far end neat the reeds a three hundred strong flock of Black Tailed Godwits have been roosting regularly. If you are lucky you will get to see a Spoonbill or two and a Glossy Ibis. There has also been a Black Swan regularly visiting Priors. The lagoon is attracting large numbers of Mute Swans as well.

On Saturday there were hundreds of Sand Martins and some Swallows that were feeding on all the insect life in the air and on the mud. At high tide there was an influx of Oystercatchers. They were in a good numbers and I suspect this is because the tide was particularly high. A Turnstone in breeding plumage joined them on the mud.

Two Peregrines turned up causing havoc amongst the waders. Dunlins, Lapwings and the Godwits all took the skies. From what I saw of the falcons  I think one was a juvenile. It appeared to play with the adult bird at one point. They had a crack at taking a Dunlin and almost had it but it escaped at the last moment.

The Black Tailed Godwits made a great commotion and I manged to get a few good flying shots. Mixed in with them were Knot, Ruff , Redshank, a Greenshank and Dunlins.


Whilst sat in the seawall hide Nev noticed what he initially thought was a Peregrine eating a small bird on the mud on Priors. On closer inspection using the video camera at considerable magnification the bird was in fact a male Merlin . Probably a first year bird. Notably it had two metal silver coloured rings on its legs. Would be good to know if any ringers have any knowledge. 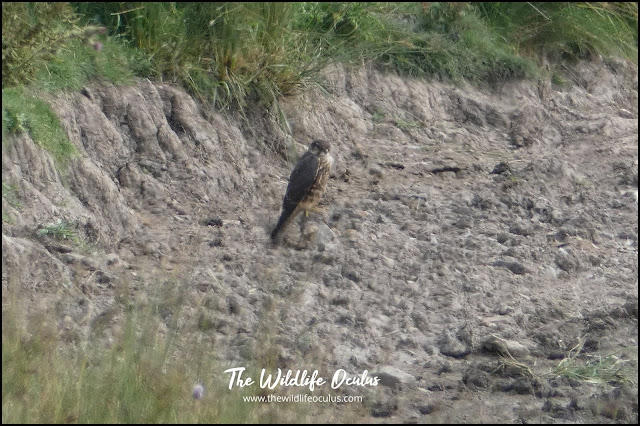 It was good too see a big flock of Curlews with some Whimbrels mixed in roost on Becs Lagoon at high tide. Some of the Curlews were colour ringed. One of the BTO guys was actually on site who has a keen interest in these ringed Curlews which was good timing on his part. 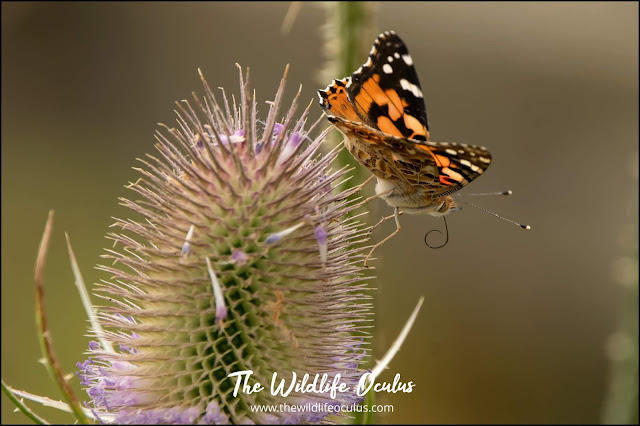 Goldcliff lagoons is home to a variety of insect species and some of them have travelled enormous distances to get here. This summer there has been a huge amount of Painted Lady Butterflies being seen all over Europe. These small insects are long distance migrants and can fly 100 miles in a day. They migrate North from the fringes of the Sahara in Northern Africa, Middle East and Central Asia. This year the numbers are exceptional. 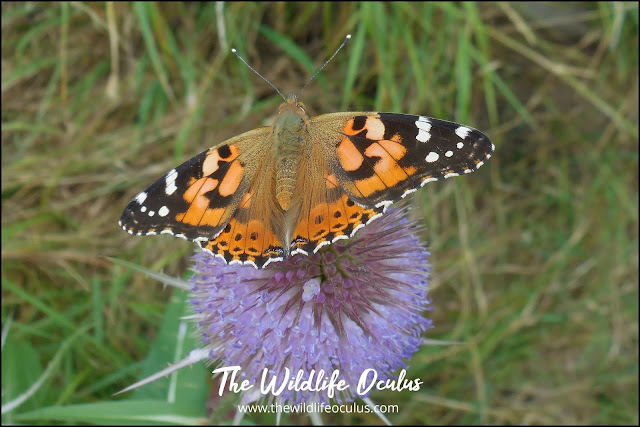