A young hunter visits my garden 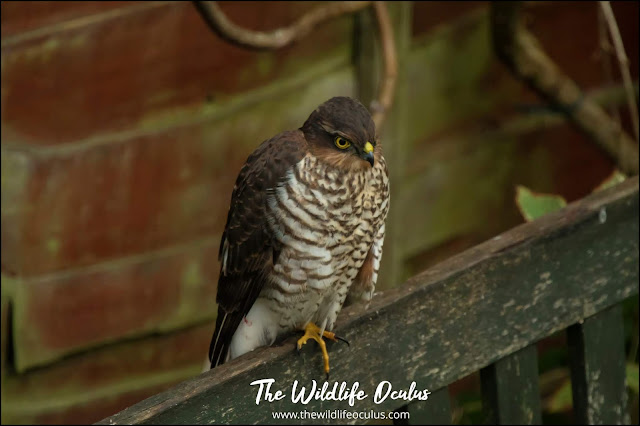 I have my own garden feeding station for the birds. Its nothing special just a variety of feeders distributed around the garden. I have been feeding birds for years and have attracted quite a range of bird species such as the usual common species such as Blue Tits, Robins and Starlings but also the more rare types such as Goldcrest, Bullfinch and Siskin. Last year when we had the beast from the east I even had Fieldfares, Redwings and a Brambling. Its amazing what you can attract to a small garden.

There is one species that has been my "bogey" garden bird and I have always failed to get a even half decent "record" photograph of. The species is a predator that specialises in garden birds as prey. You have probably guessed the species I am talking about already - a Sparrowhawk.

I have always known these elusive raptors have visited my garden and local area. Several years ago I watched a pair of them bring a juvenile to my local wood opposite where I live and they appeared t use it as a training ground to encourage the juvenile to learn to hunt for itself. It was amazing behaviour to watch and they made a lot of noise in the process when terrorising the local bird population.

Since then I have had a few other closer encounters with them. Two years ago I was photographing a line of juvenile starlings that were all in a line perched on my lawn being fed by their parents with meal worms from my feeder.

Then out of no where came a Sparrowhawk that performed an incredible feat of aerial aerobatics by nose diving over a 15 feet high garden fence before pulling up at the last second to fly across the lawn turn ninety degrees flat and launch itself into the last juvenile Starling. With only what I would describe as miraculous lucky escape did the Starling twist out of the way and avoid certain death. The Sparrowhawk had to take evasive action to avoid a collision with my other garden fence and just managed to pull up and roll over the other side into my neighbours garden. I was just not prepared for the action and did not react quick enough and missed the shot.

The garden as you would imagine was then devoid of birds for hours as anything with sense gave my feeders a wide birth afterwards.

Most of the evidence I have had for continued visits have been a a circle of feathers on the lawn and some remnants of a bird, a typical "crime scene" after a Sparrowhawk kill.

The last time I missed a big opportunity for a brilliant photograph was when we had the "Beast from the East". The garden was full of snow and the feeders had been really busy with a lot of birds using them for most of the day.  I had been photographing on and off throughout the and had just gone down stairs to make a drink. As the kettle boiled I looked out the garden and then from nowhere  came a beautiful male Sparrowhawk and it took one of the birds that had been feeding on the lawn.

By the time I ran upstairs to try and take a picture, the only remnant of life in my garden was the outline of two wings in the snow. Yet again I had missed an opportunity.

Winter has now arrived again and as the temperatures have been dropping I have started upping the amount of feed I have been putting out. The numbers of birds have steadily began increasing. My highlight so far has been a small flock of Long Tailed Tits turning up. Most days I get Blue Tits, Great Tits and Coal Tits with Robins,Dunnocks Starlings and Woodpigeons making regular appearances.

The bulk of the numbers however are made up of House Sparrows that have formed a roost in my neighbours leylandi hedge which is like their own kind of personal fortress. Its very dense and makes a great hiding place from predators. Over the last week the weather has been windy and wet and blown all the leaves off the tree where the feeders are mainly positioned so there is now little cover for the birds. This means that they have to run the gauntlet now when they visit the feeders and its all a kind of "risk v benefit" thing now when they decide to give the feeders a go.

So the other day the garden had been really busy with birds. It had been a really cold night and I guess their fat reserves were running low and food was a priority.

All morning there had been birds on the feeders. Just about all the usual had turned up in good numbers. By the afternoon though I had noticed that it had gone dead. I put the lack of activity down to the fact it had warmed up and often their is a lull in the afternoon.

I chose to go and and get myself an afternoon cuppa. As I stirred my sugar in I looked out the kitchen window and there perched on my garden bench directly under a feeder that the Sparrows favour was a juvenile Sparrowhawk. 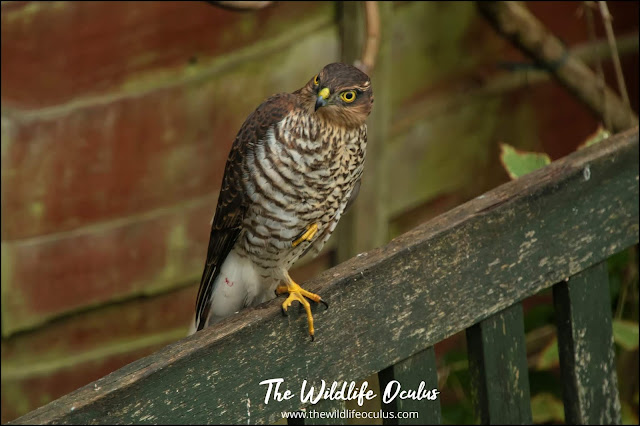 In football terminology it was "goal hanging" and I am sure the Sparrows would think it deserved a yellow card for being "offside". I had to chuckle. What a crafty predator I had in my garden.

Its attention was very much focused on the Sparrows in their leylandi hedge fortress. The hawks head would bob and twist so its amazing yellow eyes glared fiercelyin that direction.

I ran for my camera and incredibly for the first time ever when I returned it had remained perched up.

As I photographed this amazing bird one of the Sparrows dared to leave its roost and fly down to the feeder unknowing what lay in wait. "Boom" as if a racing starter pistol had gone off the Sparrowhawk exploded off the bench and hurtled at the Sparrow.

To its credit the little Sparrow turned tail immediately and sped off back into the hedge. The Sparrowhawk actually followed it and burst at full flight into a gap in the hedge and vanished inside! There was a huge commotion and all I could hear was panicked birds sounding alerts and the fluttering of wings.

Then it went dead.

I was happy and thought that was that. However twenty minutes later the hawk was back. This time it waited under the Sparrow fortress leylandi hedge and it just glared back at me. Every now and again it craned its neck and cast a beady eye into the hedge. 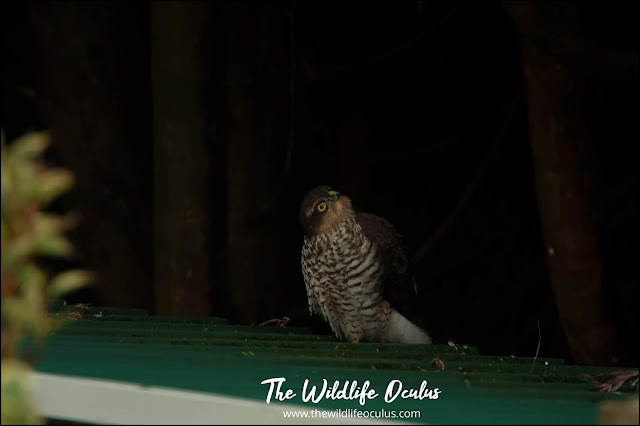 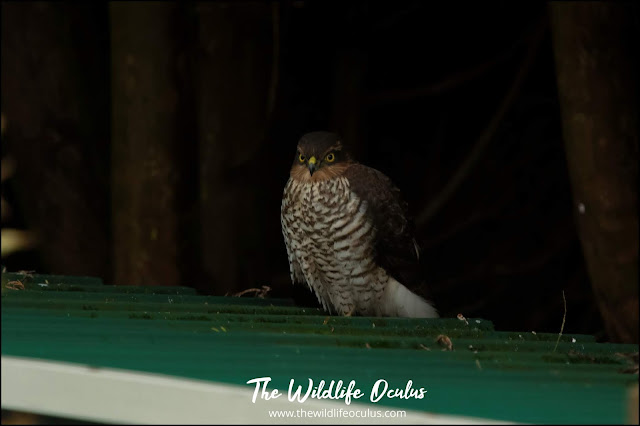 After about five minutes it gave up and flew onto my shed. It took a good look a round , christened my sheds roof with some poo and then something caught its interest and it was gone.

I was very happy. At long last I had some pictures of my own garden Sparrowhawk. I do hope it returns but I bet the Sparrows don't. The live to fight another day. 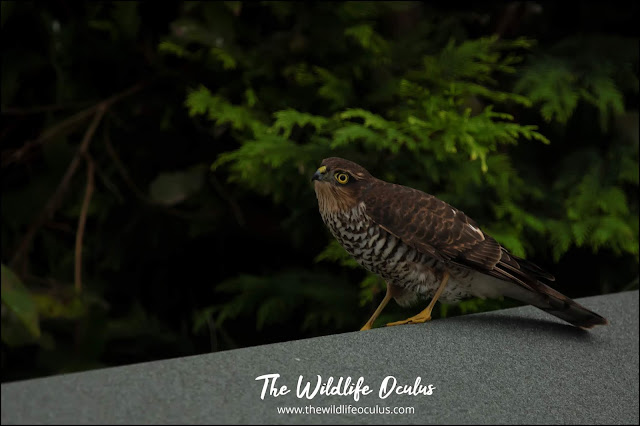 I think this Sparrowhawk is a juvenile first winter bird. What sex is this bird?  I am not sure whether it is a male of female. I will have to ask one of my learned friends to see if I can get this question answered. 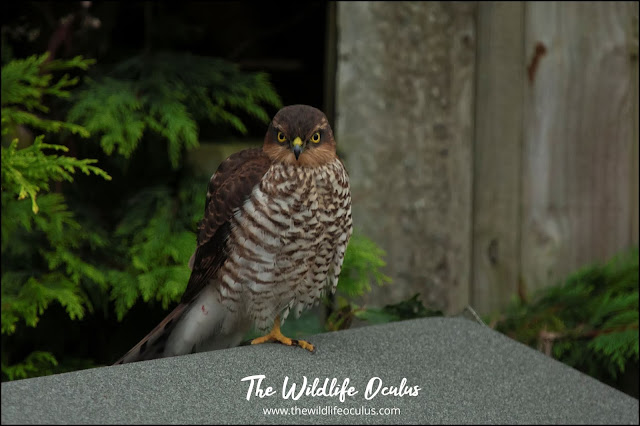