In the shadow of the Quantock Hills 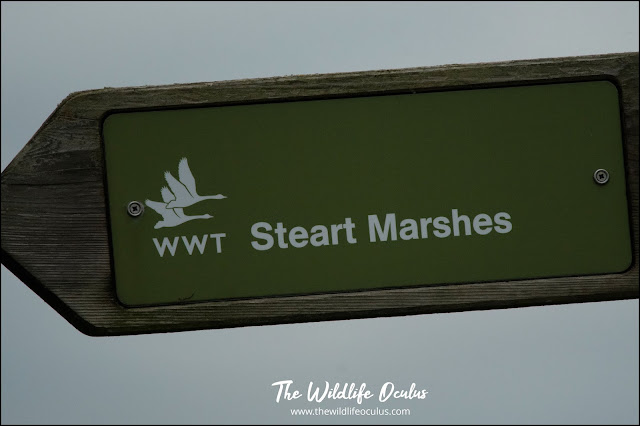 On Sunday I had an away day again. This time I was accompanied by my amigo Paul Joy. He is like my bird watching equivalent of "Yoda" and has an infectious enthusiasm for all things wildlife especially birds.

Our chosen venue for birdwatching was WWT Steart Marshes. It a reserve I have been eager to visit but for one reason or another I have not been able to make it.

It was now time for the Oculus to cast its eye over this amazing area of working wetlands and see what it had to offer. Paul was going to be my guide as he had been on several occasions previously so knew his way around.

We arrived early just after dawn and drove into the reserve. It covers quite a large area that on its east edge is the River Parret and to the North the Seven. To the West is the Hinkley Point power station.
Its also within sight of the beautiful Qauntock Hills which are not too far away and form a backdrop when you look inland.

My first impressions upon arrival was "wow". There were birds literally everywhere we looked.

Its a wetland habitat that consists of both salt water and fresh water marshes and there are a number of lagoons. The whole reserve is a living demonstration of how wetland habits can be used as carbon sinks and coastal protection to prevent things like erosion. Its makes a wonderful habitat for a range of fauna and flora. This is a relatively young reserve being established in 2015 and has been managed ever since by the WWT. Its appears to have gone from strength to strength and its biodiversity has increased every year.

The days birdwatching was marked by a dull cold gust bit of weather but the skies were full of the winter thrush migrants. Waves of Redwings and Fieldfares past over our heads many erupting in large flocks from the hedgerows where they had been feeding and headed off into the marshland.

The arrival of these migrants from continental Europe is really a herald of the coming winter. I love seeing these skittish birds. The hedgerows are full of berries upon which these hungry travellers feast on.

As we parked the car in the WWT car park I was over joyed to see a huge flock of Golden Plovers take to the sky. Unknowingly at that time they had exploded into the air out of Otterhampton Marsh.

Paul guided me along the reserves paths to the Qauntock Hide. It must be said the WWT have invested some money in the hides at Steart. All are new, clean and very well built . The hide windows have pneumatic levers on them - very cool.

From the first Qauntock hide as soon as we entered there was a big flock of Lapwings roosting on a section of the Otterhampton Marsh. Hundreds of these beautiful birds. I think they are probably one of the most colourful species of waders that we see in the UK.

There was a small number of Golden Plover in with them but I was a little disappointed not to see more as the flock I had seen earlier had been huge.

Paul nipped into the second Qauntock Hide for a few minutes, then he returned in a bit of a fluster and told me I had better get next door sharpish. I scrambled my kit together and followed him close on his heels. The view I had next was fabulous. There on a section of the mud less than 60 meters away was a mass of gold plumage. I estimate that there were about 1000 Golden Plovers roosting in full view of the hide. Neither of us had ever been that close to this species of waders.

It was a shame the light had not brightened up as if the sun had been out they would have looked spectacular.

Golden Plover ( Pluvialis apricaria) are a species of waders that breeds on upland heaths, bogs, and tundra. Whilst some breed in the UK , its a rare occurrence as most of them breed in Scandinavia and Russia. Hundreds of thousands of them migrate to the UK in winter where they gather in large flocks in suitable habitats such as wetland reserves like Steart.

One minute the Plovers were all settled and the next it was complete pandemonium. The whole flock took the sky in panic taking all the lapwings, Dunlins and ducks with them. Somethings had put the frighteners into them.

It happened so fast I hardly got a chance to get a focus lock on it before it suddenly banked like an F-15 air superiority fighter and hurtled towards the seething mass of waders.

Everything then went vertical. Lapwings and Plovers rose up high into the sky trying to keep the Peregrine underneath them.

This time the defensive tactic seemed to work and the Peregrine lost interest and left the Marsh heading off towards the river.

I love this kind of entertainment. It beats staying at home watching TV any day of the week.

The marsh was now pretty clear of birds except for a pair of Spoonbills that did not seem at all bothered by the falcon.

The lapwings and ducks returned but the Plovers stayed out of harm's way and must have made off towards the estuary as the tide had now turned.

There was a variety of ducks in large numbers. Teal, Wigeon, Mallards, and Shoveller. Also a few Swans and a Little Egret to keep them company.

A Marsh Harrier cruised in from the far side of the marsh and began to quarter near where the plovers had roosted. It picked up something and then dumped it. Whatever it was it did not look edible.


After all that excitement, it was time to explore more of the reserve.

We walked towards the River Brent. The hedgerows were alive with Redwings, Filedfares and Starlings. The thrushes are skittish birds and difficult to approach without causing them to scatter.

On the Marshland, we came across tow groups of Roe Deer. I have not seen that many deer in the UK so this was a nice find.


Starlings were in big numbers throughout the reserve. Many were on the move doing mini murmurations and gathering on telegraph and powerline cables. It made me wonder if they get big sunset murmurations later in the year.


Keeping us company almost all day was a female Kestrel. She was often seen hunting the grassy areas of land. In the afternoon the sun came out and the skies cleared and she was soon seen perched up on a telegraph pole . For a short time, we had some nice close views of her as she perched on top of some hawthorn bushes.

As the sun began to get lower in the sky we headed to Steart Gate car park which is down by the sea wall that overlooks Bridgewater bay. Views from here are truly panoramic. The bay consists of huge mudflats that run all the way up the point where the power station has been built.

You can see all the way over to Cardiff Bay, Porthcawl and Bridgend. In between both sides of the estuary are the Islands of Steepholm and Flatholm.

What caught my eye was hoards of waders. There were massive flocks of Dunlin, Black Tailed Godwits and Dunlins. Every now and again they moved position and a big flock of birds would form a ball in the sky above the mud.


Paul and I enjoyed the view but we were waiting for something special to put in an appearance. Short-Eared Owls are known to frequent the area and soon we were joined by some other eager birders hoping to glimpse them.

Just over an hour before sunset, our patience was rewarded and two Short-Eared Owls appeared from nowhere. They only showed briefly and then vanished as the sun began to set.

It was a great ending to a full day of birding delights. I am really impressed with the reserve and applaud the good work done by the WWT.