Reflecting upon a visit to Slimbridge

My last blog about a visit to Slimbridge involved a Viking theme and appeared to be quite well received. It had documented some amazing sightings of birds - particularly the Bitterns that had been showing unbelievably well. So when I returned this weekend with my friend Paul Joy it was always going to be a big ask to better what we had seen previously.

We are quickly approaching the official start of winter - 22/12/2019. The days have become really short with light fading fast by mid-afternoon so if you are out with the camera you really have to make the most of the daylight. Whilst technically we remain in Autumn nature now has other ideas. The wheels of nature's eternal cycles are in full motion now. The trees are being stripped bare of their leaves, most of the summer migrants have now left for faraway shores ( with some exceptions notably a few Swallows hanging about and a Blackcap in my garden) and the winter migrants have now been arriving for several months.

One of the winter migrant bird species that is known to be a herald marking the arrival of winter is the Bewick Swan.

This large species of Swan spends its summers on the Siberian Tundra but migrates south to the United Kingdom where it will winter.

Bewick's look truly amazing in flight with their fabulous angel-like wings. These swans mate often for life and can live over 20 years.

Slimbridge is host to another migrating swan species that is even bigger than a Bewick. The Whooper Swans are a bird I had not been lucky to see previously and I was hoping to get some photographs. We saw them from albeit from a  distance from the Estuary Tower where a family of four were grazing in a field on the Tack Piece. Whoopers breed a little less far North than Bewicks and are said to breed in Iceland and Scandinavia during the summer months.

The new Holden (aka Estuary)Tower at Slimbridge is truly fantastic. The views from the rooftop terrace are amazing. There is I think one problem that does cause issues for those with scopes and cameras is that one side facing the Tack Piece has a glass screen that has bird engravings on it. The problem is you cannot see through it very well with lenses. I have been told it's there to ensure no disturbance is caused to the birds which I think is fair enough but it would be better if the view through the glass was better.

However, it is a minor complaint as the second floor is amazing with pneumatic hide windows that look out over the Tack Piece. Paul and I spent a great deal of time in the tower watching thousands of birds.

There was a big flock of Golden Plovers and Lapwings present throughout the whole day. The Golden Plovers rarely settled for long being very skittish. Any sign of a predator and they were off in a panic. Repeatedly they would cause a huge commotion throughout all the bird population resulting in masses of Lapwings, Wigeon and other wader species filling the sky.

The Golden Plovers would initially swirl around the sky and then gain height rapidly until they were like small black specks in the sky. Then they would slowly circle and descend in a trickle to the fields again where they would settle and preen until they all got scared again.

Out on the dumbles, there was a big flock of Barnacle Geese with a Bar Headed Goose in with them which was a first for me.

In the afternoon a flock of five Common Cranes swooped in from the estuary and scared the living daylights of everything. At one point they startled the Barnacle Geese and I got my first flight shots of them.


Throughout our visit, there is one bird that I think is underrated and I have a soft spot for. We saw them all day almost everywhere. You can't miss them as they tend to be in your face hoping you have some seed for them to eat. The bird I am referring to is the Greylag Goose. I think its the closest wild relative to the farmyard goose. Whilst some people may consider them quite boring I find them nothing but. They are one of my favorites to photograph in flight and make good practice subjects.


Last time I visited we were really lucky to catch sight of the Water Rails at the Willow Hide. Yet again good fortune was with us. On three separate occasions, the shy skulking rails came out in the open to feed on the bird feeder leftovers.

I must admit I like Water Rails. There is something prehistoric about them. I quite imagine some of the most ancient birds that existed being perhaps similar to them. They are quite omnivorous eating anything from small mammals, birds to insects, fish, and seeds.

There were no Bitterns on show from the Zeiss Hide this time but the day had been full of birds and I took so many pictures and video I almost run out of memory cards.

The bird of the day with the best plumage has to be a male Pheasant that was feeding at the Kingfisher Hide under the bird feeders. The colors are amazing. 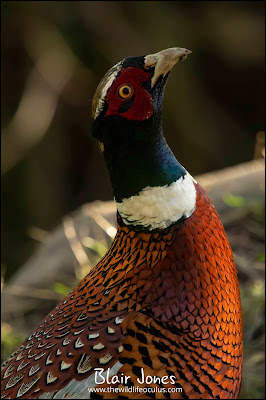 As ever the visit fueled up our enthusiasm to return again as soon as possible.