Wet feet on the Somerset Levels

The latest trip of the Three Amigos was an adventure to the Somerset Levels. In the shadow of the Glastonbury Tor, we visited three reserves. Two of them were new to me.

The first was a reserve called RSPB Greylake. As we arrived at the car park the surrounding fields were waterlogged for miles around. Paul Joy our driver for the day was pointing this fact out in an almost premonitory manner as we arrived. We were looking forward to spending some time in one of the hides on-site. Unfortunately we made a really big mistake - we did not bring any wellies.

As Nicky and I followed in Paul's wake - a regular thing these days as he tends to wander off and leave his carers behind if you don't keep him in sight, we eventually ended up "wading" through a waterlogged path with water that was well over ankle depth. It wasn't getting any shallower - it was getting deeper and without wellies/waders we would never reach the hide which appeared to be nothing more than an island surrounded by water.

Despite this set back I could not help but notice a huge number of birds flying over the surrounding fields of the main road opposite the car park. I squelched in my water-soaked shoes with my camera and watched the fields erupt with Golden Plovers and Lapwings as a Marsh Harrier disturbed the flocks that had settled on the waterlogged fields. The sun was rising and despite the sky having a layer of grey cloud, the morning sunshine forced its way through for a few minutes to give the sky a diffused orange glow which I was able to pick up a little in a few photos.

All the birds were at a distance so soon enough we off to our next stop - RSPB Westhay Moor.
Another reserve that I had not been to before. The skies were now getting greyer. We popped into two of the reserves hides and found that things were a little on the quiet side. Both hides were very nice but there was a lack of birds.

After a pit stop, we were off again and heading to our final stop - RSPB Ham Wall.

At Ham Wall, we were planning to spend the rest of the day and then wait up for the Starling murmuration.

The weather remained dull and overcast but at least it did not rain. Water levels were high throughout the reserve. It was so water-logged that my fellow amigos - who had gone walkabout, found that their passage was blocked to the Avalon Hide by a flooded walkway. Even if they had wellies with them it did not look passable.

The high water level created small islands in the reed beds throughout the reserve where various wildfowl had found good places to roost to keep their feet dry.

At the first viewing platform on one of these reedbed islands, I saw a Water Rail foraging on the edge of the water.

In another location on a similar reed island, we came across three Common Snipe that were mixing it with Mallards and Lapwings. I managed to get some nice video of one of the Snipe.

As usual we had sightings of Great White Egrets and Marsh Harriers. A local birder told us that one of the pairs of Marshys had been successful this year and another had failed to breed. We saw four different Marsh Harriers during our stay at the reserve. Four birds gathered together just before the Starling murmuration started.


Now for the big finale. An RSPB volunteer helpful advised us to wait at the platform near the canal that looks out onto the Avalon Marsh area. The Starlings apparently over the last few days had started to favor this location.

By 3.45 pm there must have been about a hundred spectators gathered at the platform.
Then in came the first wave of Starlings. Several hundred flew over our heads and over the Marsh and then, well- they just kept going until they were distant black specs on the horizon. There was so much camera kit trained on them it looked like the group had ram raided an Amazon warehouse.

At first, it was quite "underwhelming", so much so that five Mute Swans flew past and caused Nic and Paul to go into clay pigeon shoot mode and blast at them with their long lenses. Any picture at that stage would have done.

But then everything changed. Waves of hundreds Starlings came in and they gathered together albeit on the horizon but they could be viewed with the naked eye although a pair of binoculars and a zoom lens would be better. At one stage a huge wave passed overhead and the sound of thousands of wingbeats was incredible.

The whole horizon became covered from edge to edge with Starlings. It must have been hundreds of thousands of Starlings.

To be honest I had three cameras set up and did not know where to start. The main SLR camera had a wide-angle setup but that was an astonishingly bad choice on my part to use, as the birds were a country mile away and the light was shocking. My other SLR had a 300mm telephoto lens on it with a 1.7 converter but it had a job to focus in the quickly darkening skies. 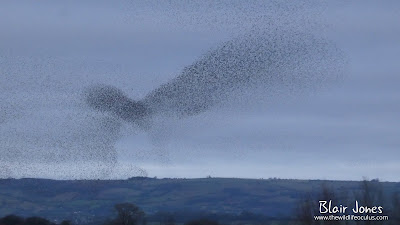 So I grabbed my Panasonic bridge camera off the tripod and used its super digital zoom capability to film what I could with it whilst keeping my hands as steady as possible.

A birdwatchers shouted, "There's a Marsh Harrier" and sure enough there it was in amongst the Starlings causing havoc. At this point, the Starlings started to do some cool movements and created some nice patterns. Nicky managed to get some cracking video of the Marsh Harrier and you can view it on YouTube - click on this link.

I was able to capture some video of the murmuration form a distance and you can see the Marsh Harrier also if you look very carefully.


The darkness soon began to fall and the Starlings descended en-mass into some distance reed beds. That was the end of one of nature's amazing wildlife spectaculars and our birdwatching for the day.

Another great day had been had and it was time for three amigos to ride out and head back for South Wales.