The return to my patch


For a month or so I have traveled over the Severn venturing to several reserves a long way off from my usual patch. Whilst it has been good to have a change of scenes I felt I have neglected my usual haunts - especially Goldcliff Lagoons.

I had a think about what my first post of this new century should be. I decided it would be good to start closer to home and return to my usual local patch.

Early on Saturday morning, I found myself stood at the edge of the Severn Estuary at Goldcliff Point waiting for the sun to rise. In the semi-darkness nearly everything was silhouetted. I thought I was the only person stupid enough to be up that early braving a quite gusty cold wind, but I could hear talking. I looked around me but could see no one. I thought it may have been some dog walkers along the wall or someone in a nearby house or even the whisperings of the wind. Nothing was seen by me. Not until however I started to focus my camera on the waters edge and then I noticed two fishermen who had cast out their lines whilst set up on a ridge of shingle at the Point. They were brave and must have known what they were doing as I would have been scared the rising tide would have got me.

I was a little disappointed as after putting the effort in to get up early on the weekend the skies decided to go from clear and starry to cloud streaked and gloomy. On the horizon, the clouds had built up heavily. Well that kind of put a dampener on my hopes of a nice sunrise. I am a bottle half full kind of guy and so on the upside, the clouds caught the first rays of sunshine and everything started to turn some cool shades of purple, red, blue and little bit of orangey gold. In the end, the pictures that I was able to get I think we're a little different to the usual sunrise shots so I was quite happy with my lot.

The Point had plenty of birds around. There is quite a large expanse of food rich mud and where I was standing there is some groins which always attracts some waders. A flock of 43 Turnstones came hurtling around the point and flew closely as they did so to one of the fishermen.
The small waders landed on the shingly rocks and began to feed busily turning stones over as they did so looking for any invertebrates hiding under them.

A group of Oystercatchers came piping in and landed on the mud joining some Shelducks and Curlews.

As the sun did not really show up for me it was time to move on and was planning to meet up with some friends at Goldcliff Lagoons.

I met up with Steve and Nev both regular birders who are also keen photographers. The reserve was the muddiest I have seen in a long time. One of the local birders fell over so I would advise everyone to be careful and wear a decent pair of wellies.

The lagoons remain overflowing with water. Not great for waders but very good for ducks and other species of wildfowl that like diving.

There were good numbers of Tufted Ducks, Coot and a single Little Grebe. Wigeon, Teal, Shoveler, Gadwall, and Mallards were in good numbers. The Wigeon were spending a lot of time grazing on the lagoon banks.


From the Snipe Platform, we had amazing views of "Flossy" the Glossy Ibis. It came in the closest I have ever seen it. For once I could see the speckling on its head and neck with my naked eye.

It was great to see it this close and I managed to get some decent pictures and a video.

Other highlights were seeing a pair of Stonechats and a Sparrowhawk at the Seawall Hide and a Kestrel near the second hide.

My next stop after Goldcliff was the Usk River on the outskirts of Usk Town where a Smew and some Goldeneye had been spotted in recent weeks.

This was a patch of Monmouthshire that I had not been too for a while. On arrival, I met some familiar faces - including Steve again - all of them had gathered with their scopes and cameras at a viewing point over the river at a very respectful distance from the Smew that was hanging about upriver. It was record shots only at great distance. Getting any closer was impossible as the area where it was located is fenced off and the river banks are treacherous. I have plenty of pictures of Smew close up taken at Slimbridge and I was quite happy with just seeing a "wild" Smew locally- which made it a lifer technically, as it was not an exhibit bird-like at Slimbridge. 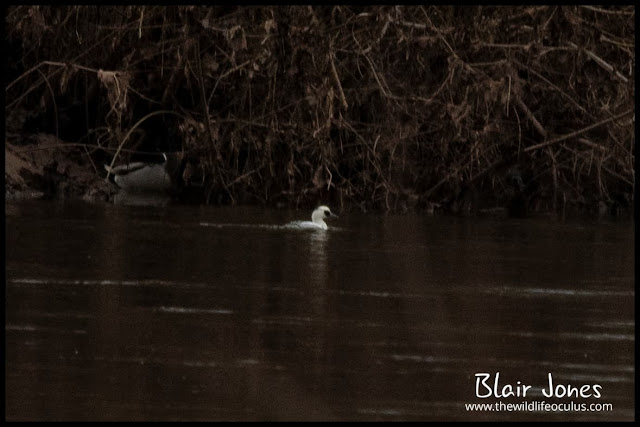 Then it was time for a quick look at Cadiri Beeches at Wentwwod for Bramblings. I had a walk around with Steve - there were plenty of Chaffinches, Nuthatch and Coal Tits but no Bramblings. Lots of dog walkers did not help either.

So that I thought would be the end of my birdwatching for the weekend.

However on Sunday morning just as I was about to go out a "Tweet" went out that a Black-Necked Grebe had been seen on Priors Lagoon at Goldcliff Lagoons.

It was too much for me to resist and so I made my way to reserve on a bit of a long detour from my intended destination.

Luckily the Grebe hung about and after trying to jog in wellies through the muddy reserve I made it to the Snipe Platform where it was showing at a distance. 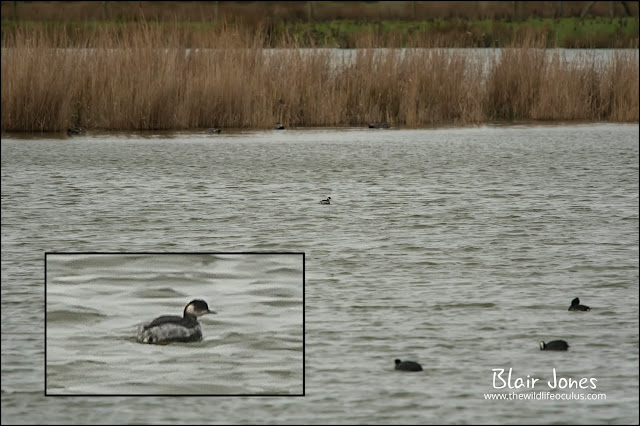 Two ticks already for 2020 and we are only five days into the year. A fabulous start and I hope the remainder of the year proves to be a good.