Weeks of being a garden birdwatcher and a couple of society outings.

I've found fitting in birdwatching trips, especially to my beloved Goldcliff Lagoons very difficult in recent months. The main factor preventing me from getting out with the camera has been work and by far the most impacting the second being the weather. Storm Ciara and Storm Dennis have resulted in an unprecedented amount of rainfall and the weather always seems to be worst on the weekends when I get my free time.  Last weekend I have never seen rainfall like it in Torfaen and the Afon Llwyd finally burst its banks at the Polo Grounds in New Inn. I've been saying it for the last few years that one day it's going to burst and it this year it finally did. With global warming, increased development and lack of countermeasures like upland forestry planting I don't see it getting any better.

I've also been getting involved with the Gwent Ornithological Society here and there. I am now a proud member of the committee and been getting a real insight into the great work the society does. Anyone who has an interest in birds and wildlife in Gwent should really consider joining it. I've been to my first committee meeting which really opened my eyes to a lot fo the good work people do voluntarily.

The Gwent Bird Report 2018 has also been released and it was nice to see quite a few of my pictures being published in it (Front cover by Lee Gregory of a Caspian Gull, my pics - Short-Eared Owl and a Pied Flycatcher.) 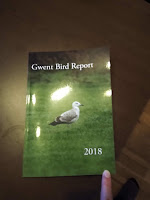 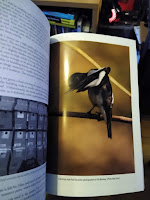 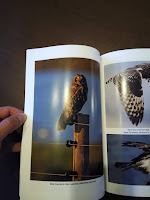 Last weekend I went to a GOS presentation delivered by Dr. Robert Thomas from Cardiff University. The talk was about a project researching whether Eagles could be reintroduced to Wales. It was very interesting and prompted a lot of food for thought. Imagine Golden Eagles over the Blorenge or White-Tailed Eagles swooping over Goldcliff.

So, for the most part, when not working and going to talks and doing family stuff  I have been relegated to the house and had to concentrate on birdwatching in my garden.

I have been feeding the birds throughout the winter with several well-stocked feeders so I have maintained quite a variety of different species and on some days usually when the weather has been particularly bad large number of birds.

Occasionally I have got lucky and my local juvenile Sparrowhawk turns up, but for the best part it remains out of sight and the only indication I get that it's around is Blackbirds turning on the hysterics scaring anything feathered to death.

This year there has been one species totally absent from my garden. Last year Siskins were legion in number and they were eating me out of house and home of birdseed. I wonder whether its because the winter has been relatively mild and they have not migrated as far south, or perhaps there is no shortage of wild food either so there is no need to compensate for lack of food by visiting the garden. It may be because I cut down the bamboo bushes so there is a lack of cover. Who knows but not a single one of these Greenish yellow and black finches I call the "Borussia Dortmund" birds have turned up.

However, another very colorful species has taken full advantage of the bountiful supply of sunflower hearts. Every day since the turn of the year I have been getting Goldfinches visiting the feeders. First one then two then four and now on average this week I have had thirty or more. For a small garden, this is the equivalent of a horde.


These beautiful finches have amazing golden-yellow markings on their wings. They look amazing in flight and when they fight each other on the feeders. The finches have a strict pecking order and often end up having scraps over which feeder they can cling on to.

Its the most Goldfinches I have had in the garden for years. On average they are consuming almost a 1 Kilo bag of sunflower hearts a day. Greedy so and so's but I am enjoying their company on these rainy days.