In the shadow of the Folly 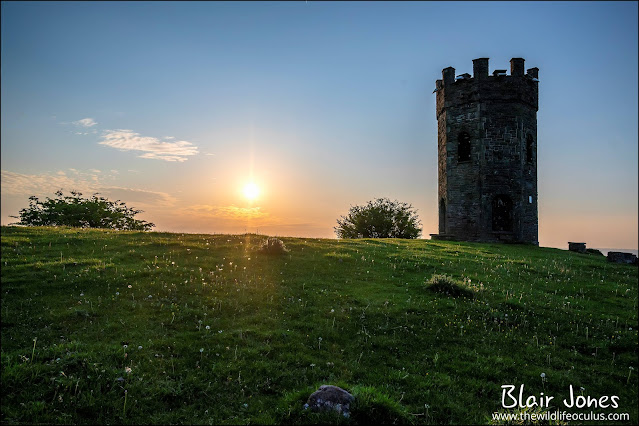 I have explored my local patch like never before since the lockdown started. With several square miles of agricultural land, woods, and parks around the housing estates that I live in that all lie in the shadow of the Pontypool Folly.
There is quite a diverse range of habitat to be explored with lots of flora and fauna to be found. On every exercise walk, I have made an effort on most occasions to try a new route or go a different time of day just to see what's different out there.
For a while, I have been determined to try and get some decent pictures of sunrise. One of the best places within walking distance at the crack of dawn is the edge of Pontypool Park and the beginning of the trail up to the Folly. The path to the Folly is actually a section of my British Trust for Ornithology (BTO) Breeding Bird Survey( BBS) transects that I am sorry to say officially has been cancelled so far this year due to the Covid-19 outbreak. I think I am fortunate to have this route to survey as the whole area is a real gem of the area. Parkland and sheep grazed fields in one section that leads up to the mountain tops with fantastic views of farmland and the wider valleys.
Last weekend at stupid o'clock I found myself huffing and puffing marching up through the steep sheep-filled fields to just below the Shell Grotto. As I set my camera kit up I listened to the amazing dawn chorus. One particularly loud Blackbird really turned its volume up and was a real treat to listen to. Looking to the east I could see the sky on the horizon was glowing a cool orange and red. That indicated dawn would soon be upon me. As I scouted for some good places to view the sunrise it was amazing to see that a grassy slope was covered in short growing Bluebells. They really looked great in the dawn light. I love the predawn wait. You can smell the freshness of the air and the senses generally feel the pending excitement of the coming dawn. Everything is gearing up to start another day.
Up came the sun at last and it was well worth the wait. I think I managed to capture some nice pictures. 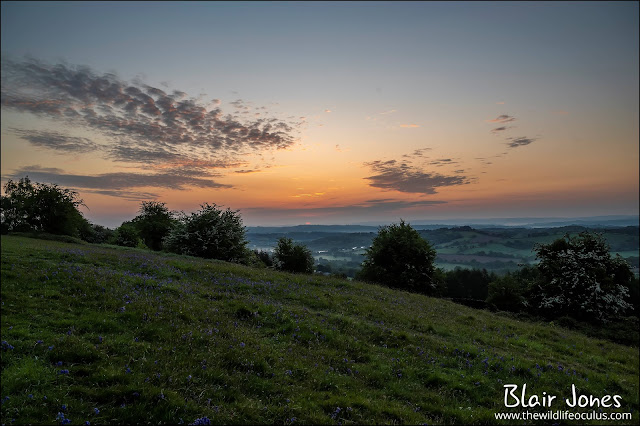 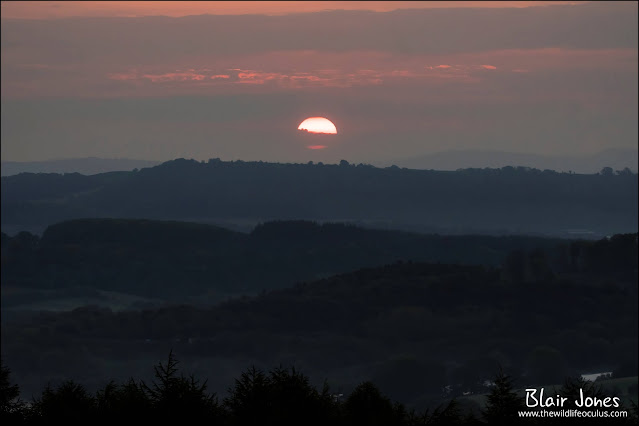 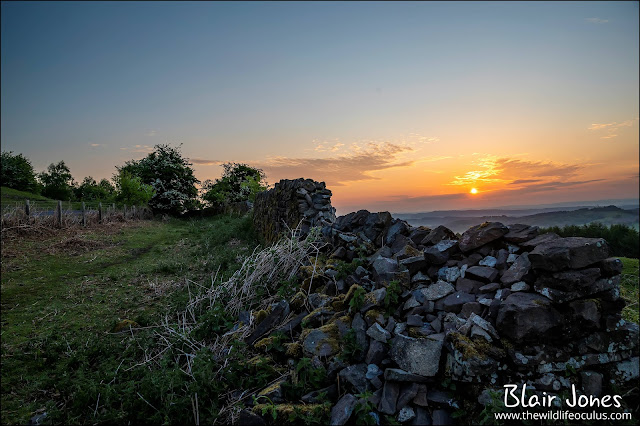 Before the sun reached its zenith I moved on and walked all the way to the Folly. As I got there the sun had not quite peaked and the light remained quite warm without being too harsh on the eyes. Great light for a photograph of Pontypools most prominent landmark.
The Folly Tower has a really interesting background. It was first constructed in the 18th century by the Hanbury Family who was the local landowner and ironmaster. The Hanbury family have a huge legacy in the majority of the area. In 1940 the Folly had been demolished because of the fear it would be used as a landmark by German bombers due to the Glascoed Bomb Factory that was close by being a prime target. It would not be until 1994 that it was finally rebuilt after a restoration scheme funded by the European Regional Development Fund, Torfaen Borough, Croft Pontypool, Gwent County Council, The Prince of Wales' Committee. A reference for these facts with moe information can be found here. 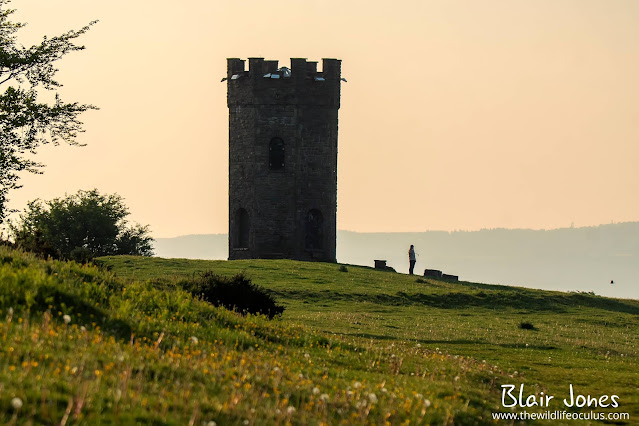 In all honesty, I had forgotten these facts myself as I now am so used to seeing it I can't remember it not being there now at all. Its a feature on the landscape that I have often looked for when I have been travelling afar and when I catch sight of it I feel that it is like a beacon welcoming me home.
Further up above the Folly the walk leads to the mountain top. A land of gorse, heather, pockets of mixed woodland and conifer plantations, sheep and some very large rare breed of cattle. The stone walls that border the common land were home to quite a few Wheatear and Meadow Pipits. Up in the sky singing their little hearts out were Skylarks. A tremendous song to hear from a little bird that sings on the wing. Towards the top, I heard my first Cuckoo. Despite waiting around I could not catch glimpse of it.
My view from the top overlooks much of the area that I now frequently explore when I am birdwatching. I think the area is broadly called Llanvihangel Pontymoel. Its a couple of square miles of farmland that seems to be mainly used for livestock and fodder crops rather than arable. The whole area is rich in wildlife and has small pockets of ancient woodland.
As I surveyed the ridge that Cwmhir Road follows up from Jerusalem Lane I thought it would be good to try and get a sunset view one day looking from the opposite side of the valley.
So Tuesday evening I ventured out up Cwmhir Road and found myself standing opposite the Folly waiting for the sun to set. I had company this time whilst I waited. A whole heard of what I think are dairy cows were busy doing some serious grass munching. One of them took a shine to me I think and was doing its best to nuzzle me as stood next to the gate of the field. We don't give farm animals the credit they deserve sometimes. They are cleverer than people think and very inquisitive. 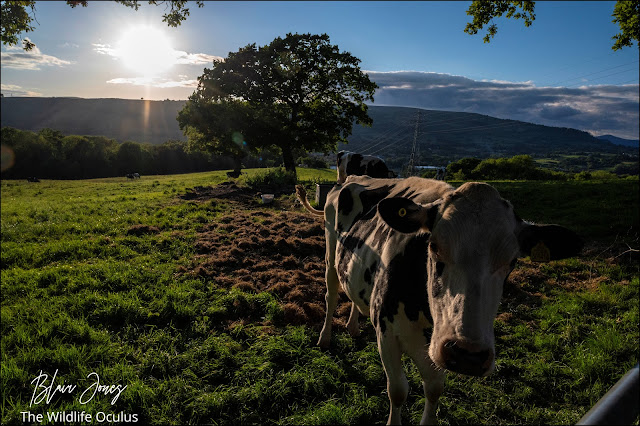 The sky was generally nice and clear so the chances of a decent sunset were looking good. There was however a rather large cloud heading directly towards the Folly Tower threatening to spoil the sunset.
I tried to judge how long it would take to reach the Folly as I had about an hour to wait until sunset.
About 15 minutes before sunset the now big bank of clouds arrived above the Folly and started to obscure the sun. You can plan and prepare as much as you like but you can't control nature. I thought things were going to be ruined but then a gap developed under the clouds above the Folly and the mountain. It went dark as the sun was hidden behind the clouds but then the sun gradually dopped from behind the clouds and the light was so bright it was blinding. It was a real challenge to peer through the viewfinders on the camera and I had to best guess focus and exposure.
Then the sunset and went down directly behind the Folly, jut like I had wanted. My mission was accomplished. I hope you enjoy the pictures. 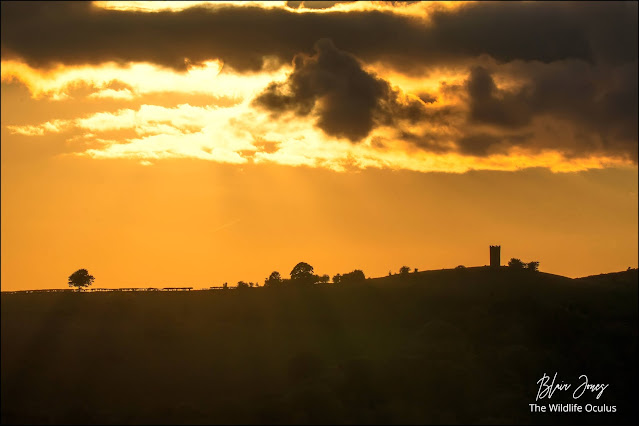 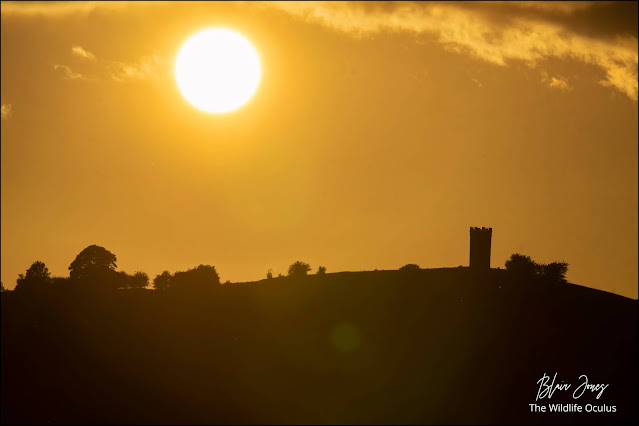 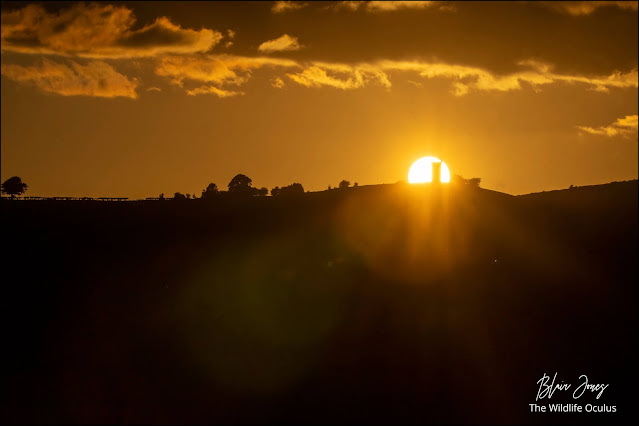 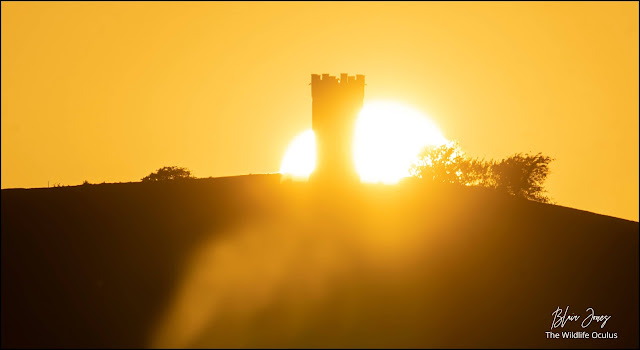 Just as the sun had gone down I was joined by another photographer who has a love of taking sunset pictures all over Gwent. Our paths crossing was quite a coincidence and it did make me chuckle.
The afterglow of the setting sun backlit the Folly causing some great sky effects. At one point the clouds looked like they were on fire.
I feel so privileged to live in such a fantastic place in Wales. Within a ten minute walk, I can be surrounded by countryside and wildlife with amazing sights to behold. 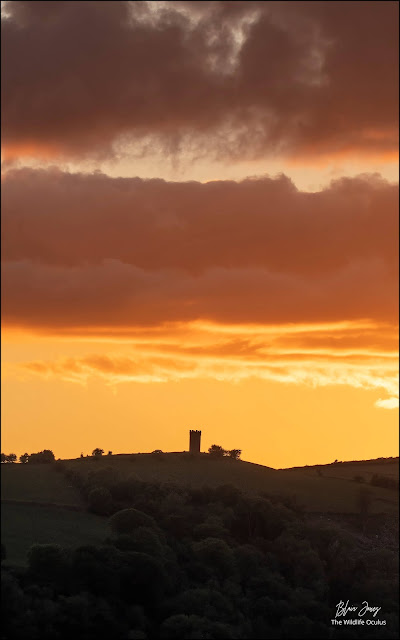 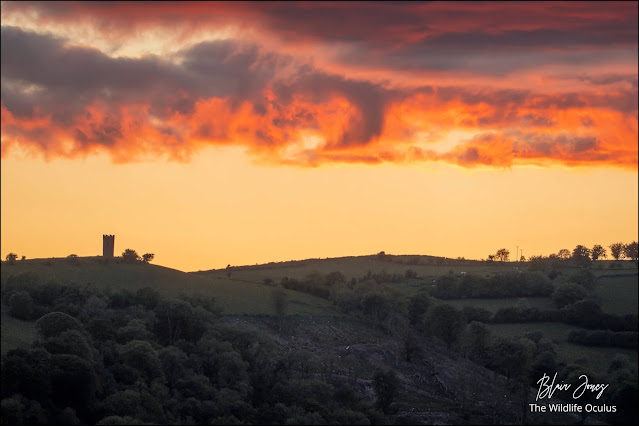