The lockdown has really focussed my photography on local wildlife and landscapes. To be honest if there is one thing that will come out of this Coronovirus nightmare is that it may make people appreciate more what we have on our own doorstep. There are people out there who have probably travelled almost half way around the globe and further but never seen a sunrise or sunset where they have actually lived all their lives. Whilst there are many mind blowing exotic places to visit , good old Pontypool also has some incredible natural vistas to behold. That's what I have been concentrating on the last month or so. As I have said in previous posts I love the light the so called "golden hours" of dawn and dusk offer and these times of day can make anywhere look pretty awesome.
Getting up for dawn at this time of year is a real challenge if you like your sleep ins. It has steadily been getting earlier and earlier since the start of spring and to date its a sleep shattering 4.49 am ! Throughout the lockdown I have been walking everywhere.  The lack of car use has not only reduced my carbon foot print but its made me alot fitter. I wont pretend though that carrying all my camera kit in the early hours of the morning is often a recipe for back ache later in the day.
The views to be had though are tremendous if the weather is favourable and you put the effort in. I always feel like I am in a rush when I start off early in the morning. From the minute I get up the clock is ticking and I feel like that I am in a race to rendezvous with the sun. Its quite exciting.
In Pontypool if you want to see the rising sun you really need to be somewhere elevated and that means walking up a a few steep hills or two to get somewhere with a good view. During the days when I am off  work I spend quite a bit of time checking locations out and thinking about good spots to take a picture from. The main rule of thumb though is the sun rises to the East so you need to make sure your looking in the correct direction.
Last weekend I chose to take some photographs from the Folly. I got some cracking photos but had a disaster when I my tripod got blown over and my wide angle lens got smashed to pieces! I always like to have a story behind my pictures as it makes them mean something rather than just something abstract.
Every time I look at the pictures now I will remember what they cost me :0.
Nevertheless the view was fantastic. 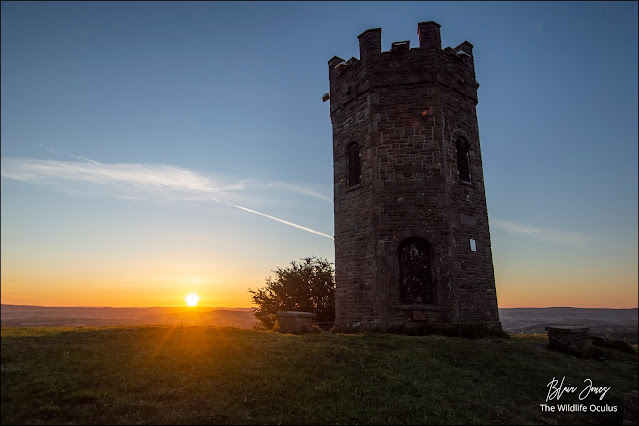 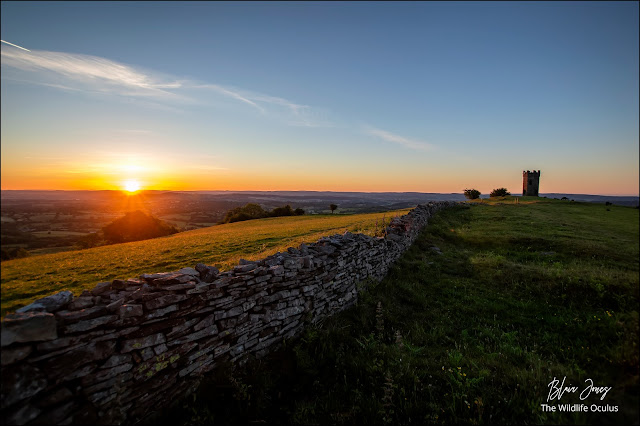 This weekend I decided to to walk up Mynydd Maen to catch the sunrise. Whilst walking up the mountain  at 4 am the Beetles song - "Here comes the sun" started resounding around my head.
Its a beautiful tune and helped motivate me as I set up the camera as a bone chilling wind had whipped up. I tried my luck this morning a bit as last nights weather report was not at all favourable and offered me only a small window of clear skies to get a shot of the sun rising.
I waited for the sun to rise all wrapped up as if it was mid-winter and watched the clouds come rolling in across from the North West . It looked like a rain front was moving in and I had a grand stand view of its tip spreading gradually across the clear blue twilight skies. To my back was the setting "Strawberry Moon". It was really bright and full as it slowly dipped behind the summit of Mynydd Maen. 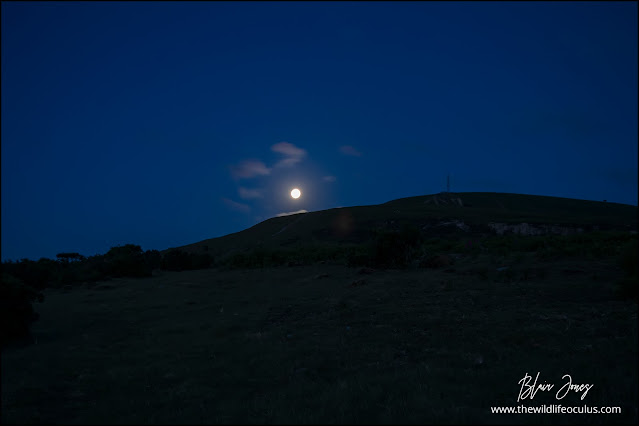 As the sky started to glow orange over the whistling of the wind I could hear the songs of Skylarks and Stonechats. Further along the path from where I was sat two Wheatears were calling to each other and keeping a close eye on the camouflaged human intruder on their territory. 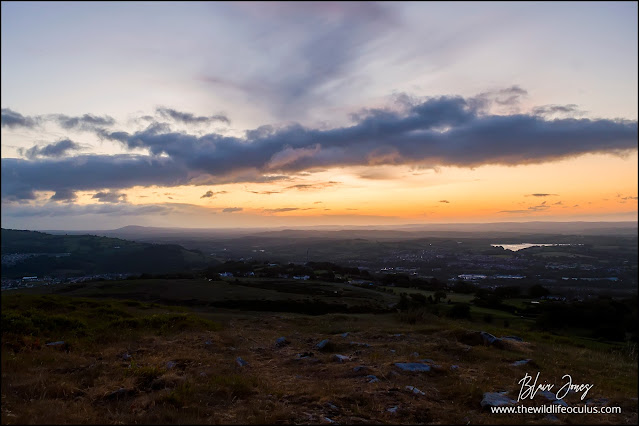 My mother asked me the other day how quick does the sun take to rise once it starts and I told her that its quick and you can almost miss it you get distracted. This morning I was cold and tired but paying full attention so there was no chance of that. 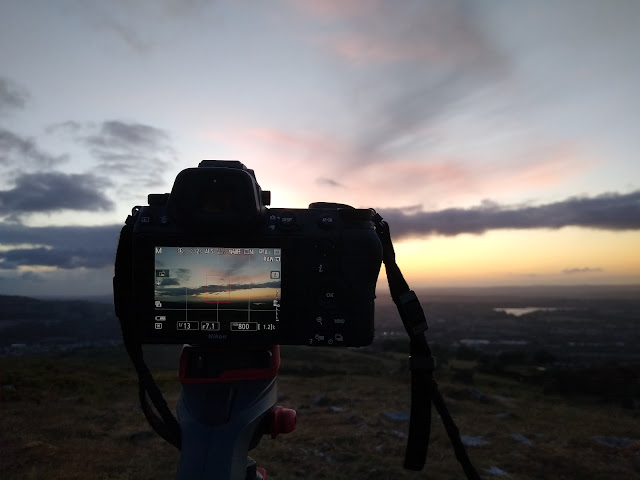 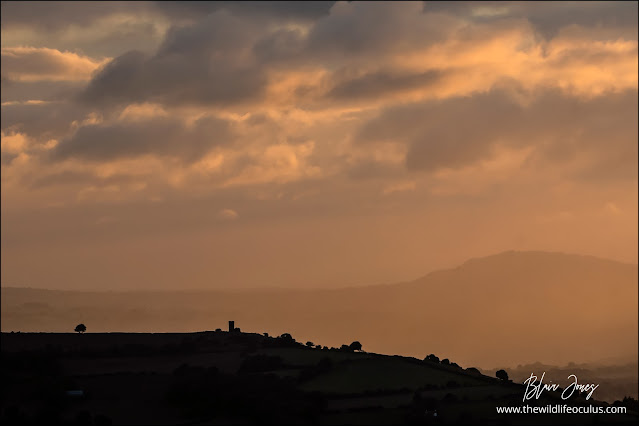 The clouds had now spilled out from the direction of the folly and were starting to obscure the horizon. It was going to be touch and go if I would see the sun at this rate.
Then the sun broke through casting its orange glow over the blanket layer of clouds in the sky. It looked great. I always think cloudless skies make boring photographs. This morning the clouds made all the difference and gave the pictures a little "atmosphere". Who needs to go anywhere exotic when you can watch views like this in Pontypool :)
Hope you enjoy the pictures as much as I did taking them. 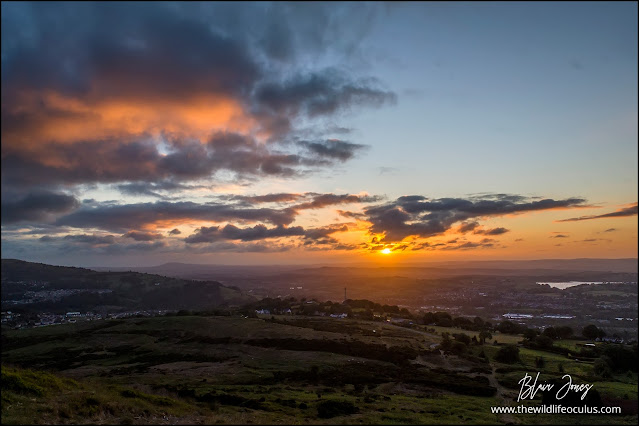 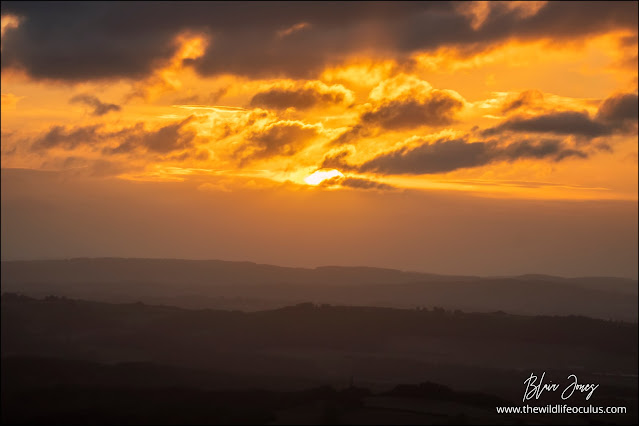