I am sure it will be waiting for you 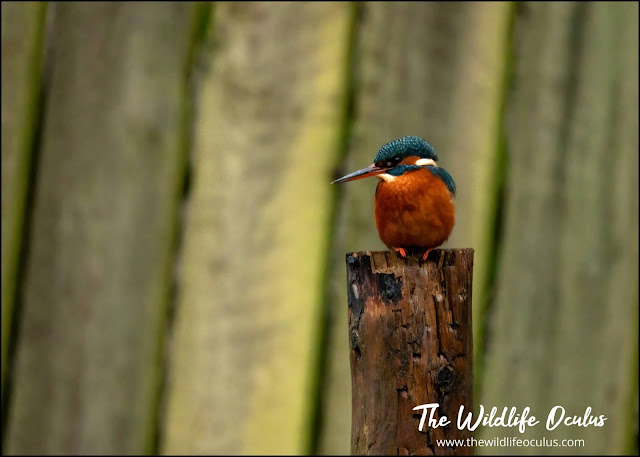 The good wildlife photographers often spend a lot of time doing research. You often hear the less informed individuals saying "he's a lucky so and so" when talking about certain "fortunate" photographers who seem as if by magic to be able to find birds and animals to photograph. Its almost as if these photographers are like the pied piper and can some how attract birds to themselves.

In reality most photographers make their own luck. Yes its is good to have lady luck on your side and be in the right place at the right time but usually it takes patience, perseverance, good fieldcraft , a lot of effort, and thorough research. Another key factor is knowing the area you are visiting to take photographs. If its local and somewhere where you intend to go regularly then visit it frequently. Get familiar with the ebb and flow, what is there often, any "issues" such as lots of dog walkers, people, cyclists, hazards and how accessible the place is.

Having plenty of free time is also a huge bonus. That's something I don't often have so I am challenged in that area and have to maximise the use of my time whenever I am out with the camera.

Usually during the evening before the following day I am planning to go out, I tend to start "researching". A favourite of mine is to check the various Social Media feeds for reports of any sightings in the location I am planning to go. My family have become so familiar with my routine now that often when I mention a sighting out loud they chuckle when I state "I may check that bird and place out tomorrow", and a favourite sarcastic response has been "I am sure it will be waiting for your tomorrow Blair".

Its all a bit of a jest but it tends to make me turn a little competitive and I just love to be able to go out and find the bird and bring a picture back to prove them wrong and say - "it was waiting for me":)

In reality this rarely ever comes off. I usually return "empty" handed. With the Tier 4 lockdown in place it has forced me to hunt locally for my wildlife and exercise more. Under Tier 4 the rules clearly state exercise should start and finish at home. Driving to places for exercise is against the rules. I have abided to  this whenever  possible.

My focus of attention of late has been the canal in Pontymoile, Griffithstown and New Inn. The area is a short walk from my home and is somewhere I frequently visit on my regular walks. For a number of months a Kingfisher has been showing up near the basin. To be honest for many a year there has been Kingfishers wintering on that stretch of the canal. You don't see them as much during the summer months as I think they move on to breed on along the nearby Afon Llywd River. 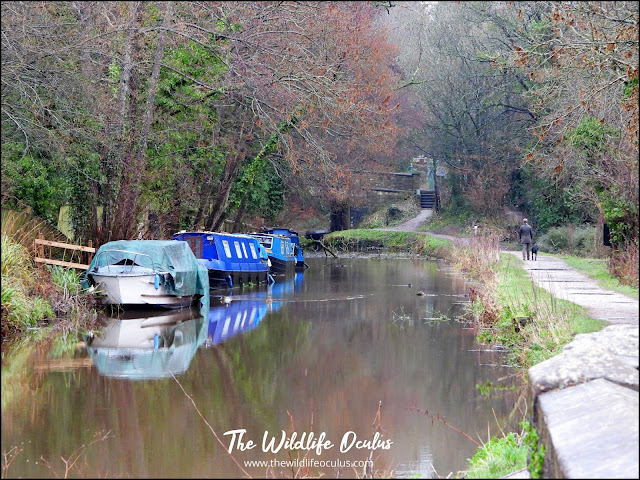 I have upped the numbers of times I visit that area in the hope I improve my chances on seeing a King when I have my camera with me. Despite numerous visits the best I have had is hearing the piping call of the Kingfisher and a flash of blue as it speeds down the canal past me.

The canal in the area has an aqueduct that crosses the Afon Llwyd river. Due to the unprecedented amount of rainfall we have had in recent weeks the river is like a raging white torrent. You could think that that there is unlikely to be anything making a living in that raging flood water but if you look carefully you may see the UK's only aquatic songbird - a Dipper. I have seen a pair of them this week. 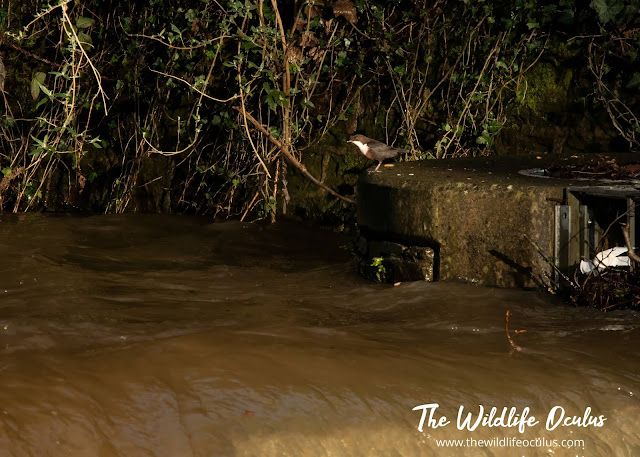 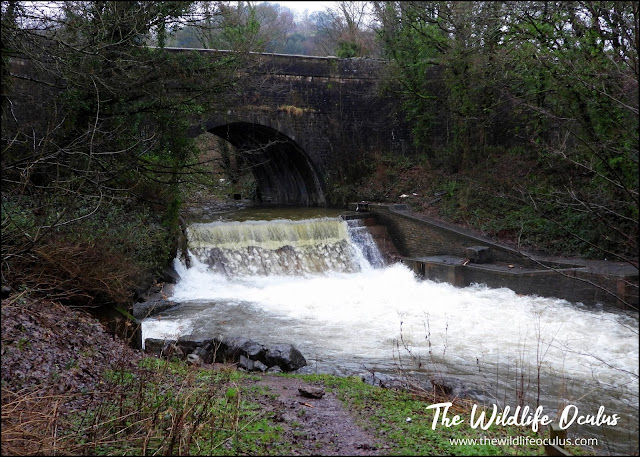 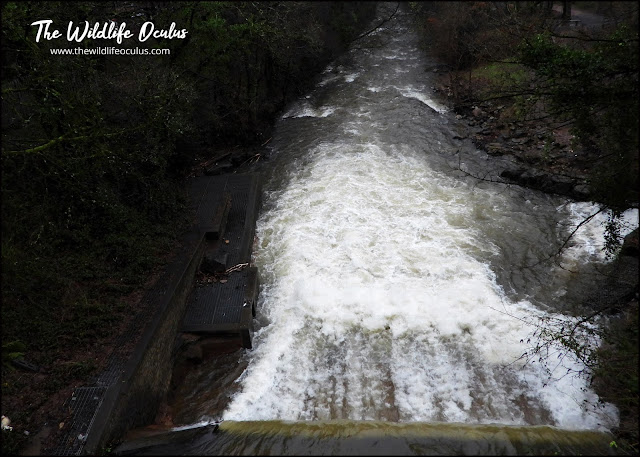 This morning I decided to walk to my parents via the canal and by chance decided to take my camera equipment with me. As I walked the Pontymoile stretch its was relatively quiet.  For once their were few dog walkers and cyclists to contend with.

One of the species highlights I have had  whilst walking the canal has been to see quite a few, male and female Goosanders. They are usually seen as either a solitary bird or in threes. These much maligned birds - many an angler has a particular dislike of them as they get blamed for eating all the fish stocks. Goosanders are like some kind of mix of a Mallard Duck and a Cormorant are very attractively plumaged birds. The drakes have amazingly coloured Green Heads and the females of the species often referred to as "Red Heads" have a lovely gingery red coloured head. 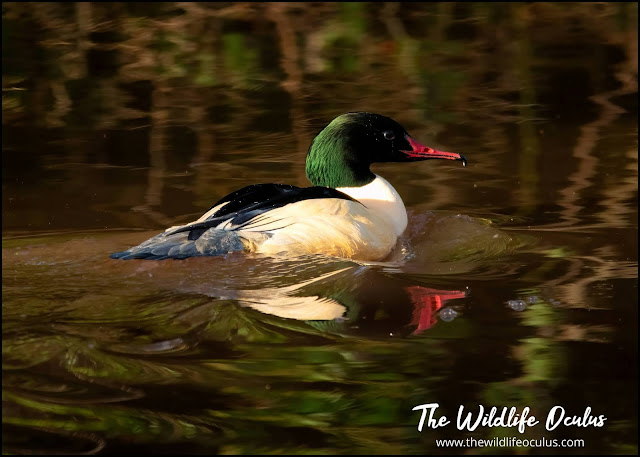 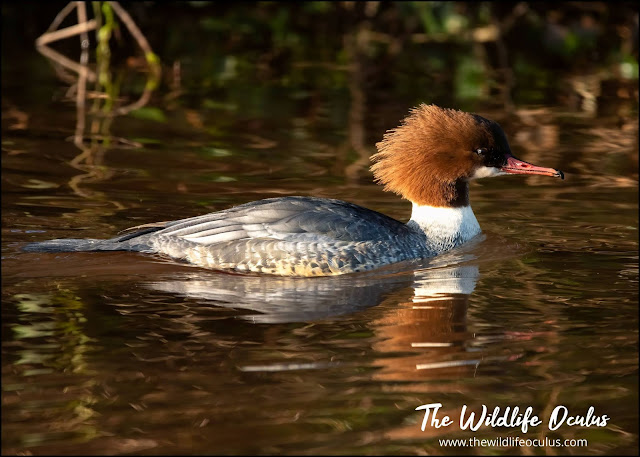 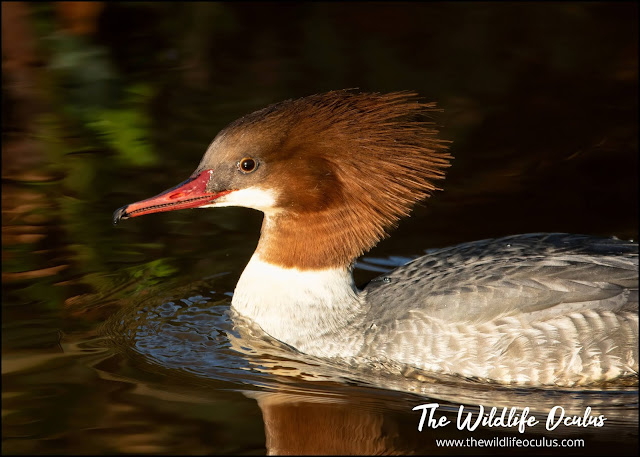 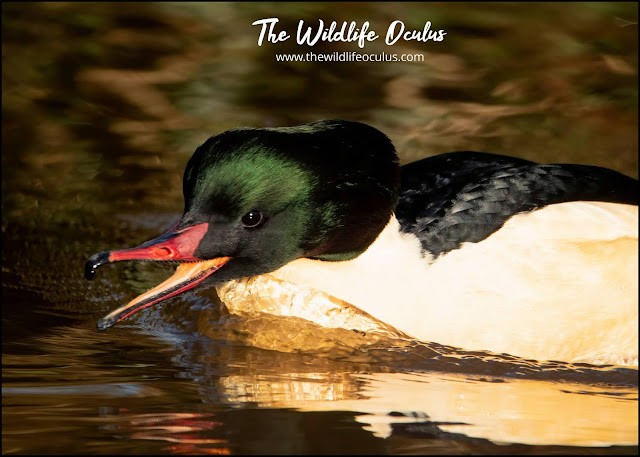 If you look carefully you will notice that they have specially adapted beaks with "teeth like ridges" designed for catching fish which makes up large proportion of their diet. The canal has become quite a wintering ground for these colourful fish eating ducks.

Something caught my eye in the hedgerow, that distracted me from the Goosanders and I turned away from the canal and searched the bushes. It was a Robin that popped up onto a tree branch and became very accommodating for a picture. 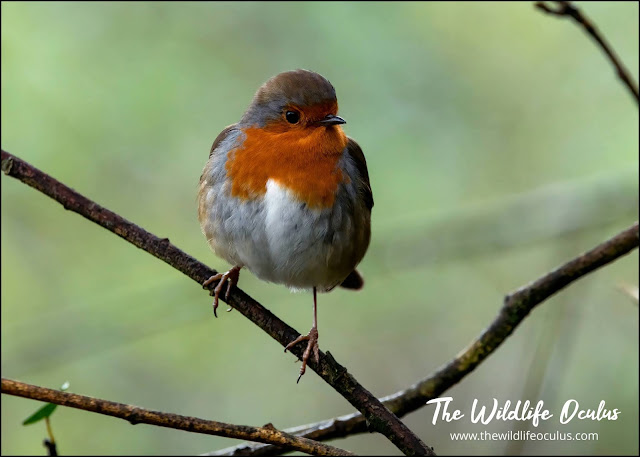 Its then flew off as a walker turned up out of nowhere - as is usually the case. My attention then returned to the canal and to my utter disbelief perched opposite me on the other side of the canal was the Kingfisher. It was perched patiently looking down at the murky waters for a fish.

For once I had my camera ready and I quickly took some pictures. I could hear more people approaching and just knew, that on seeing me with a big lens would result in attracting their attention. Whilst its great that others sometime get to see what you are photographing , more often than not the "subject" will notice more people approaching and fly off - which was exactly what happened. 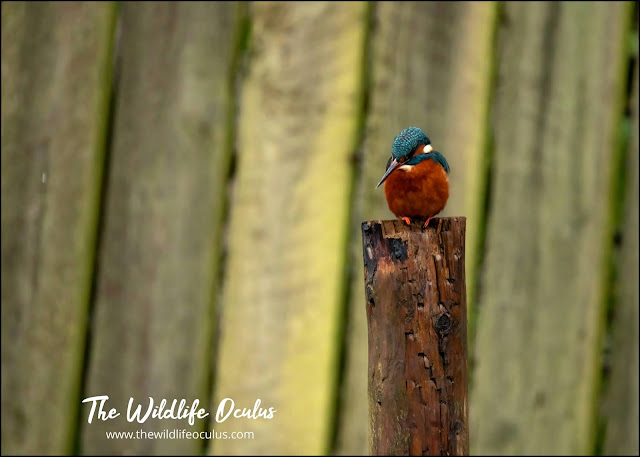 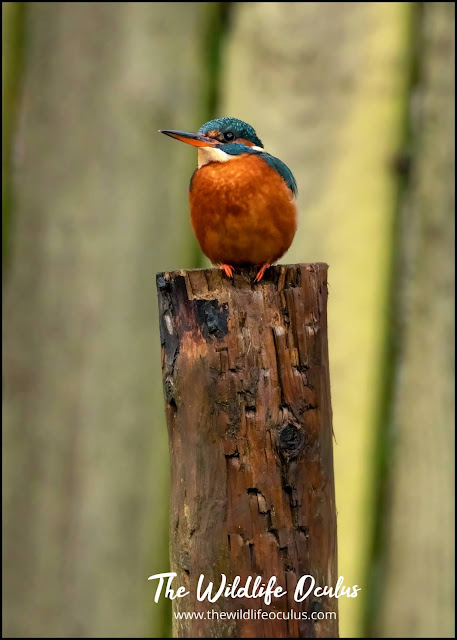 Whilst I had a matter of seconds to photograph the bird, the time I had was well worth it.

It was time then to continue off to my parents and also to send a couple of picture messages off to the family" telling them, "It was waiting for me" :)