The dawn of a New Year and a wonderful White Buzzard 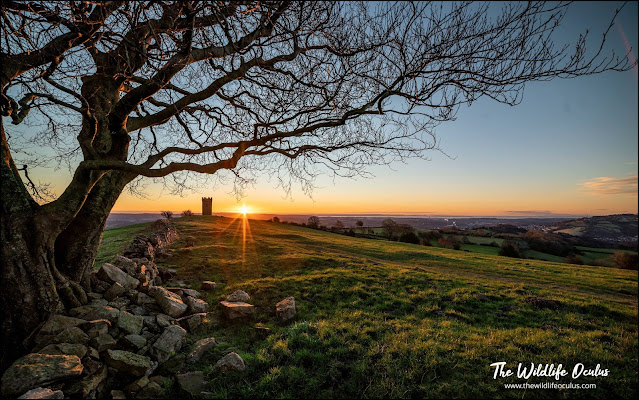 2021 is now upon us all. Good riddance to 2020 which as been such a dreadful year for many. Whilst we are far from out of the woods yet we do have "hope" that things will start to get better and this year we will start our fight back against the Covid virus in earnest.

In the natural world, in my opinion, nothing encapsulates the meaning of "hope" better than watching a sunrise. The rising sun stirs something primal I think in everyone and motivates the soul to feel better and the mind can't help but think of positive and hopeful thoughts. Dawn signifies the start of a New Day, to me it always gives me the feeling that I have a "clean slate", a new blank mental canvas to start my day, my mind has had a reboot and what I fill it with for the rest of the day will be new and exciting.

Since the turn of the year, I have been keen to catch a sunrise. The weather was not good enough on New Years Day and in any case, I had a bit of a hangover from all the festivities so I walked my local stretch of the Monmouthshire and Breconshire Canal. Once again I was really lucky to be graced with the presence of a Kingfisher which showed very well from various perches. What a great start to this years birding.

Later in the day the weather reports were looking good. Whilst the weather was going to be freezing the skies were predicted to be clear for the second day of the new year. That helped me come to a decision on Friday evening and start planning to walk up to the Pontypool Folly for dawn.

Several hours later I was up at "stupid o'clock" carefully walking along the streets of Pontypool. The ice was so bad in places it was like an ice skating ring.

As I started ascending the steep hill that leads up to the Shell Grotto I could see a light up at the grotto which moved up and down like a firefly in the darkness. Someone was already ahead of me. That "someone" was my friend Paul Coombes. Like me, he also wanted to watch the sunrise and he was making his way there intending to meet me at some point.

It was heavy going carrying all my kit and I stopped for a breather halfway up to catch my breath and admire the view across New Inn and beyond. The urban lighting looked amazing stretching out all the way to a very distant Prince of Wales Bridge and the Severn Estuary. An orange band was now stretching out across the easterly horizon. Daybreak would soon be here and it was time for me to get moving again.

Every time I walk to the Folly along this route I chuckle to myself and think how lucky I am to have such great views on my doorstep. Much of the path to the Folly is also part of my BTO Breeding Bird Survey route which is also a huge bonus as I can contribute some scientific data and enjoy panoramic views at the same time. Hopefully, I get to it later this year in the Springtime as last years was cancelled due to Covid lockdowns.

Halfway up I got to the "whistling tree" as I call it. Its an old tree that whistles when the wind blows through it. The view from this location is amazing. Now rising up just above the horizon was a very bright star low in the sky. The star in fact, was actually the planet Venus. Soon it would vanish into the brightening morning sky. What sights you get to see if your driven enough to get up early and do some walking.

Eventually I arrived at the Folly. Sheltering out of the bitingly cold wind behind the tower was a friend of mine - Paul Coombes. He's an enthusiastic fellow birder and talented photographer.

In previous years we would have done the customary shaking hands thing, but we now live in "strange times" so we instead keep at a safe distance from each other.

I had made it to the solitary stone tower with about thirty minutes to spare before sunrise. The walk had certainly burned off a lot of my New Years Day dinners calories and I felt pretty good for the exercise.

Now it was time to get set up in preparation for taking some photographs of the soon to be rising sun. Looking eastwards their was a spot already on the horizon that was starting to show a corona of orange and a bright haze, a good sign to suggest that was where the sun would appear.

We both decided to set up near under the branches of the only tree that grows in the old broken stone wall that divides the common land from the farmland. Notable in their absence was the breed of Black Cows that often graze the pasture here. They have become quite iconic with the Folly and are often seen up there.

Behind us a waxing moon remained high in the sky and the brightening sky was streaked with red and the land below being snow covered hills. Fantastic vistas for the eyes which every way you looked.

Then sun beams burst from the east. A fireball began to rise on the horizon and rays of orange light began to warm our faces and the whole area started to glow that lovely almost firelight colour.

My first dawn sunrise of 2021 and it was a great one to behold. You know in that moment, I felt perhaps things will get better after all. Lets hope we kick Covid in to touch.

Once the sun had hits its zenith it was time to move on. Paul suggested we take a look for the renowned Pontypool "White Buzzard" as it had been seen again recently. A very white coloured Buzzard has been around the Pontypool Park area for many years. The last time I saw it was five years ago when I was walking with my daughter near the Shell Grotto and it soared the thermals above our heads.

Since then I have been aware of reports of it being seen but not had the opportunity to see it when I have looked. I remember the first time I saw it in about 2014, at first I thought it had been a seagull as it was so white. Several years ago the Wildlife Presenter Iolo Williams when filming his Great Welsh Park series, visited Pontypool Park and he and his crew were searching the area for the elusive White Buzzard in order to film it. They eventually had some luck and found it.

On my usual birdwatching patch - Goldcliff Lagoons on the Gwent Levels there are a number of whitish buzzards that often get misidentified as Ospreys so we have started calling them "Bospreys". I know from my previous experience that the Pontypool White Buzzard in comparison looks almost like an Albino - its that white.

With our target bird in mind, we set off down from the Folly back towards the Park. The fields around us were fairly devoid of Birdlife. The seeps of Redwings could be heard and the usual Carrion Crows and a Raven were coursing the winds that swept up from the Hillside.

Then Paul spotted the elusive "White Buzzard". It was perched up near a farmhouse. It stood out a mile - well it did to Paul for sure as his keen eyes found it rather than mine.

The Buzzard seemed pretty comfortable and perched up for a while allowing us to get a good look at it. This bird of prey is not an Albino. I would describe it as having 90% white coloured plumage with the remaining being brown. There is some brown on the head above the eyes and then more scattered on the wings almost what you could call a "pied" effect. Eventually, it flew and shortly afterwards we relocated it in a tree. When it flies you get to see that the wings are streaked with brown plumage.

It really is an amazing and quite unique bird to see. I am not too sure if it is the same bird or a descendant of the original White Buzzard I saw years back. I tend to suspect it is the same bird, as Buzzards can live around eight years in the wild. However, I have read of Buzzards living twenty years or more.

After watching it for a while we left the White Buzzard in peace. I love to name some of the unique birds I write about and I have decided to call this one "Gwyn" - it means "White" in Welsh. It also means "blessed and holy" and I must admit being able to catch a beautiful dawn and see our wonderful White Buzzard I felt very lucky and a little religiously awed by it all.

Let's hope "Gwyn" remains a feature of the area and is not disturbed too much. It's an amazing wild bird to watch at a respective distance and something we should be proud to have living in Torfaen.

Happy New Year to all of my readers :)