The snowy wilds of the Pontypool Folly

I've been spending a great deal of time up there over the last twelve months walking up and down to the Folly. I must admit it is one of the most picturesque places in Torfaen. The farmland and Pontypool Park that surrounds the Folly is rich in wildlife and breath taking views - despite the fact that the whole area is bordered by the large housing estates of Griffithstown, Pontypool town, Trevethin, New Inn and Pen-y-garn. I think the people of Pontypool are so lucky to have such a place on their doorsteps.

If you ever walk up the Folly during the hours of darkness, like I did on Friday, on a clear night you will be truly amazed at the panoramic views to be had all the way to Severn Estuary. The night lights look amazing - even if I have to admit this grudgingly, as it is sad to see so much of the countryside turned over to housing estates. I worry how this will impact the lovely surrounding "wild" countryside we have in future years. 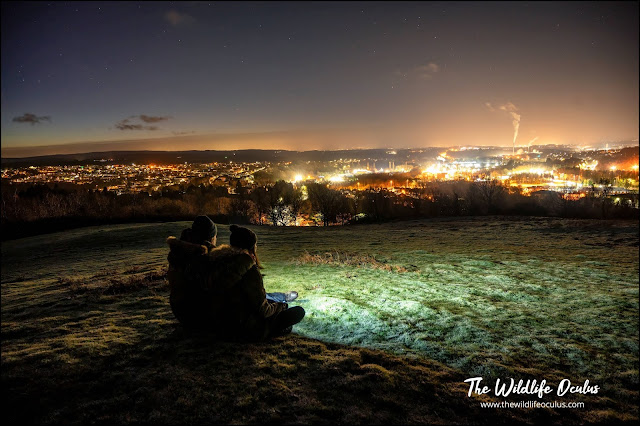 The view from the Folly on Friday was pretty cool. I was accompanied by my daughter for the first time in a while and we enjoyed watching the sun rise together.

When I saw the weather forecast on Saturday evening, I soon caught "snow fever" and my mind began to race at the potential opportunities for taking some cool pictures in the snow up the Folly. For some reason in my naivety I imagined a snow covered landscape with the twinkling lights of New Inn Village and a magnificent orange fireball on the horizon. I was going to be in for a shock come Sunday morning.

So, Sunday morning, the alarm went off at stupid o'clock. I looked out the window and "wow" it was snowing well and truly.

Twenty minutes later any hopes I had of clear skies totally evaporated. I was trudging up the steep hill from the turnpike in a blizzard barely able to see ten meters in front of me. The hill now resembled a ski slope and by the time I got to the fallen down tree I felt like Scott of the Antarctic marching to the South Pole.

I think a lot of people consider me crazy but its moments like this I chuckle to myself and ponder "look at what everyone is missing being tucked up warm in bed". I tried to take some pictures on my way up but to be honest it was a total white out.

Eventually I got to the top and reached the Folly about thirty minutes before dawn. The snow was fantastic but I had next to no view at all. For miles around it was just white and a thick mist covered the countryside. 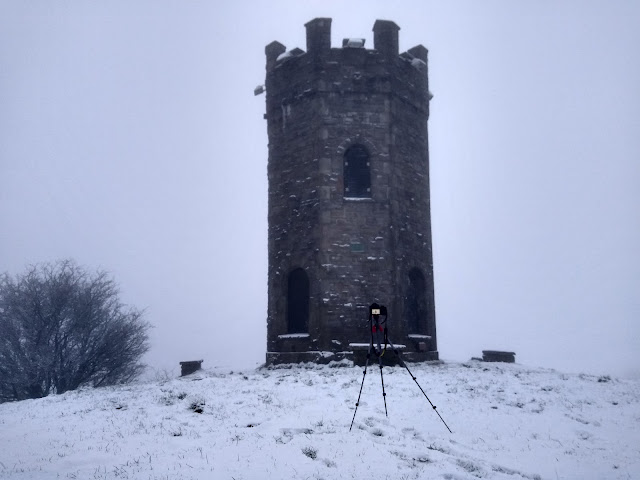 Good photography requires patience and luck. It was time to enjoy a bar of chocolate for breakfast and wait. Things could only get better - or I could freeze to death.

At dawn there was no sun, but I was joined by one of my blogs followers, a chap named Steve Bool. He was full of enthusiasm telling me about an amazing video he had taken of a Kingfisher eating a newt taken in Pontypool ( Hopefully it will be on Spring watch). It was great to catch up at last with him.

Then suddenly by some kind of miracle a gap parted in the sky , blue sky could be seen and the orange glow of the rising sun burning through the clouds. 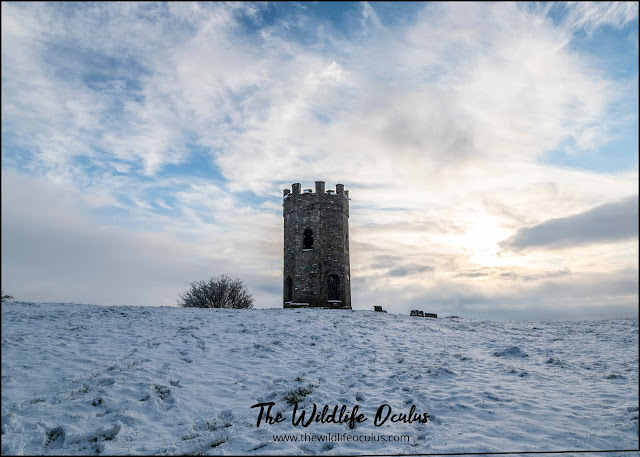 I set up my camera quickly for a picture and then from no where a beautiful very excited Hungarian Vizsla dog named "Bella" photobombed my picture jumping into the air. By luck more than judgement I captured a picture of her in mid air before she bounded off with her owner ( Mat, if you are reading I think the dogs fantastic, she can walk in front of my camera any time). 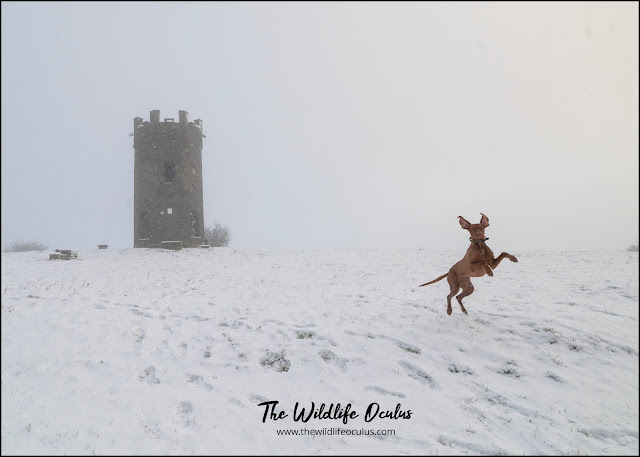 Then a friendly chap turned up in shorts and t-shirt and explained he was doing some kind of super fitness technique - I just felt cold looking at him but fair play he was full of smiles. I think the snow brings the craziness out in man and beast :)

Things went quiet for a while and the sun continued to burn through the clouds and I was able to take some cool landscape pictures. 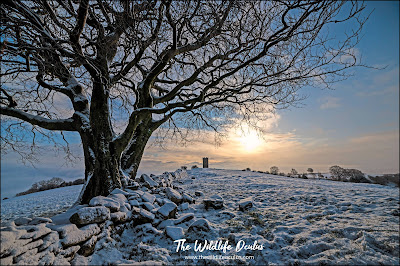 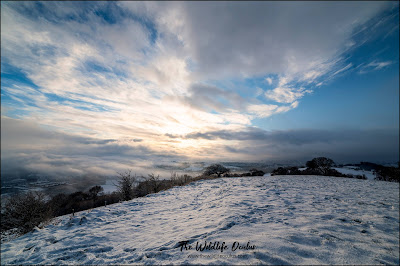 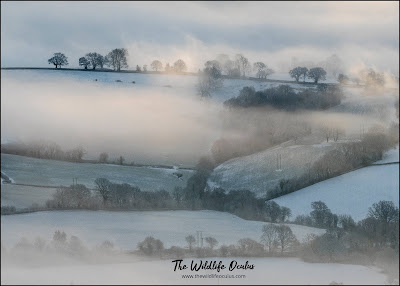 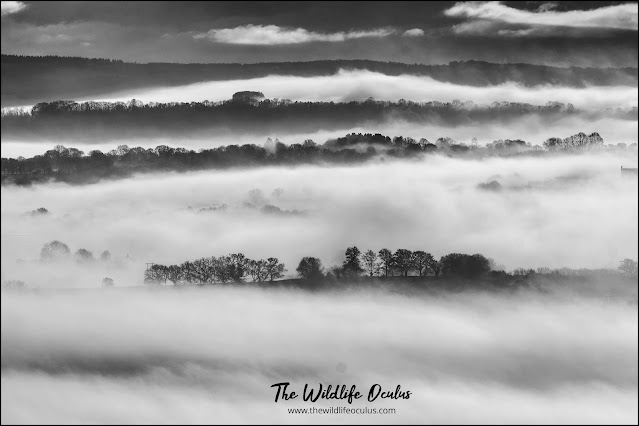 In the valley below  a huge cloud of low cloud swept down from Abergavenny covering Goytre, Little Mill and New Inn. It looked amazing from up the Folly.

I headed back down from the Folly. The area is full of wildlife, especially birds. As the skies cleared and the land began to thaw from the warmth of the sun it was like an alarm clock had gone off and birds were appearing from all over the place.

A raven cawed from on high above, Fieldfares and Redwings erupted from the hedgerows on my passing along the track, Robins sung from the treetops and in the distance on an old tree was perched the White Buzzard ( I have nick named "Gwyn"). Now more than ever it looked so much at home in the wintery wild landscape of Pontypool. 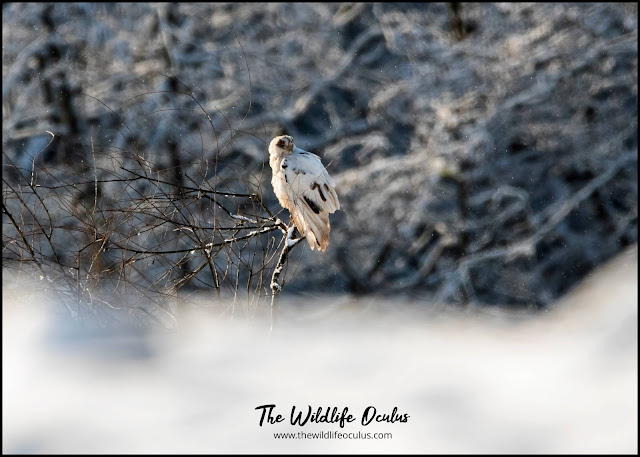 Seeing the "Snow Buzzard" in conditions like this was a real highlight of the day. We have so many cool things to enjoy on our doorsteps in Pontypool and on days like this I hope everyone appreciates  and cherishes it for the future.

To finish off I would like to extend my thanks to Torfaen Borough Council for using my picture recently in their press release and the South Wales Argus for publishing the pic of "Bella" photobombing my Folly pic - and also a little errata - Bella is not my dog as mentioned in the paper. 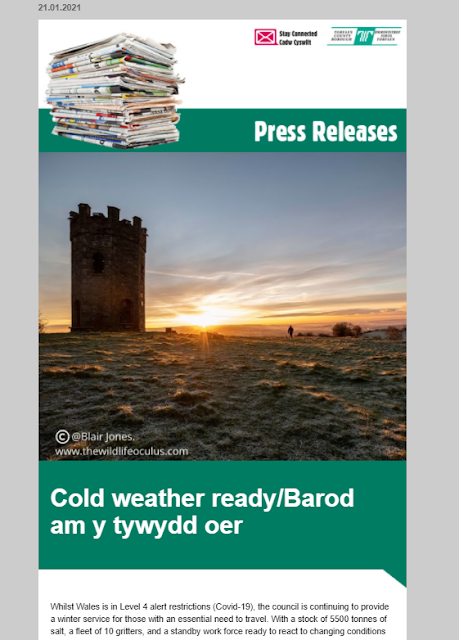 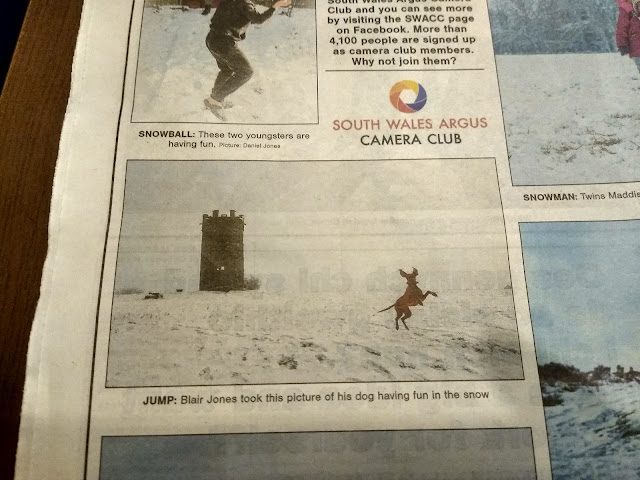