I've missed the the warm embrace of Goldcliff Lagoons 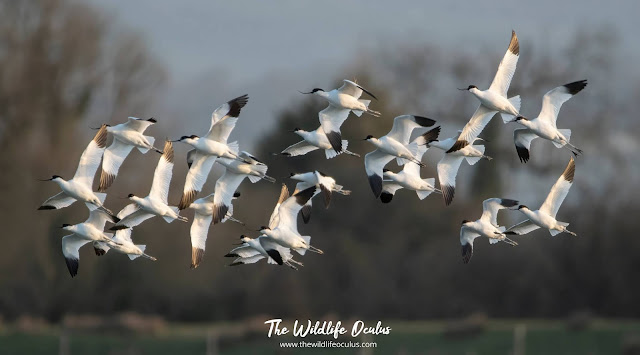 Today I returned to Goldcliff Lagoons like she was some some sort of long lost lover. I have missed the lagoons dearly since the December lockdown and my love of the lagoons has never diminished. Whilst I have enjoyed my local patches the passion I have for the lagoons has remained burning like the  embers of a fire, waiting in anticipation for when the fire can be released and I return to the warm embrace of the reserve.

Wow it felt so good to be back. I was not the only one to have returned either. I was joined by several of my very good friends and I must admit it was great to see some of them for the first time since last year. I really enjoyed their company today.

The reserve itself was looking in pretty good shape. The NRW appear to have been doing an excellent job of keeping the reserve in order.  The hides and platforms are all open. The hide doors have been removed to allow for air circulation and when you use them you should be keeping an appropriate distance apart from each other.

The water levels are quite high but this does not appear to have caused any issues with the waders as there were lots on the site to see - more on that later.

I was so excited this morning I woke up even before my alarm which was set at a very early 4.15 am!

That's what I call "crazy o'clock". By 4.30 am I was out the door and driving down to Newport.

The sky's were fairly clear with a little cloud and the moon was shining brightly as I arrived firstly at Goldcliff Sea Wall. I decided to check this out first as its one of my favourite places to catch a sunrise. Up on the wall the only company I had was a lonely fishermen. It was almost high tide and there was a very chilly wind blowing in from the estuary.

Whilst it looked like their would be a good sunrise , my eagerness to see some waders on Goldcliff Lagoons got the better for me ( as well as the biting cold that was numbing my fingers) so I jumped back into the car and headed straight to the reserve.

On the way I bumped into my friend "Paul", who was going to brave it on the sea wall for the sunrise. When I parked up at Goldcliff I was joined by two  more "Pauls". Honestly you can't make this up, I am going to have start using nicknames as sometimes it can get really confusing when we are all having a chat. Even my mother gets confused when I start saying I was out with "Paul" today and she says, which one is that ?-" The one that is always happy? The one that is "Rushy" or the Welshy one from Glamorgan ?" :) Always makes me chuckle.

Anyway I have digressed, back to he birding and the reserve.

Well, walking into the reserve did bring some tears to my eye - no it wasn't from the emotion of it all (honest) it was from the bitingly cold wind. It really was bone chilling today and made my eye stream.

When we arrived at hide 1, it remained quite dark. The moon was setting over the power station and looked pretty cool. Out on the lagoon was a good flock of Shelducks and I counted 43 Curlews roosting.  Great to see that the Curlews continue to use the lagoons as a tidal roost. I scanned them the best I could but I could not make out any coloured rings in the near-darkness. 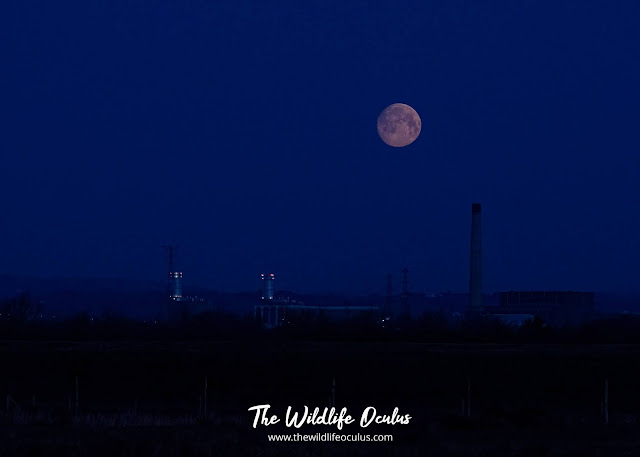 Moving through the reserve we eventually got to the Snipe Platform for a look at Priors Lagoon. It was like Swan Lake with ten Mute Swans ( the most part looking like cygnets). There as notably  a few diving ducks such as Tufted Ducks, Pochards and a hybrid Scaup. Paul "The Welshy One" picked out a Merlin. I had a job to see out of my watery eyes as the wind was blowing like mad through the gaps in the platform. 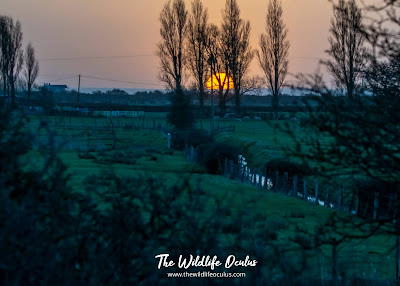 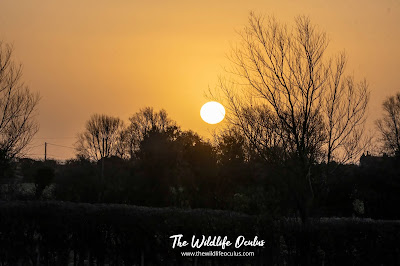 Thankfully we didn't linger too long and headed for the Marsh Platform. As we did the sun burst up from the horizon and the light started to get a little better. From the Marsh Platform I got to see my first lifer of 2021. A Bean Goose that has been reported recently was floating in front of the platform and it was accompanied by a White Fronted Goose. What a great start to the day.

Looking across Priors Lagoon towards the seawall hide their was quite a commotion and up into the air rose a nice flock of Avocets. What a sight that was. I love these marvellous pied coloured waders with their up turned beak. They are one of six key species of waders that breed on the lagoons. For the last few years they have made lots of attempts at breeding but predation of the chicks seems to be one of the main factors  hampering any kind of real success. Lets hope they have better luck this year. Every March we see the Avocets begin to gather in a large flock on the reserve, they will then start courtship and pair off. They tend to favour the island on Becs and Monks. 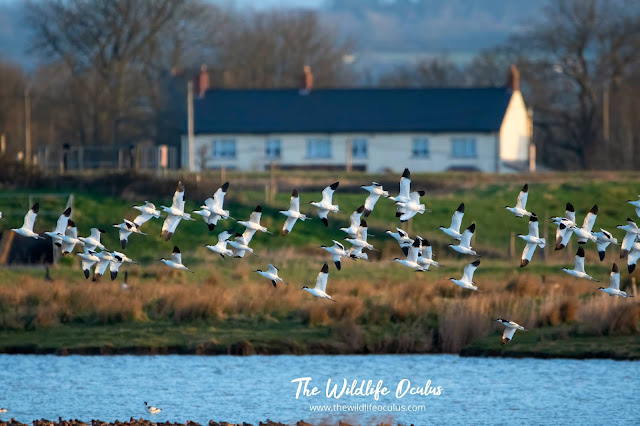 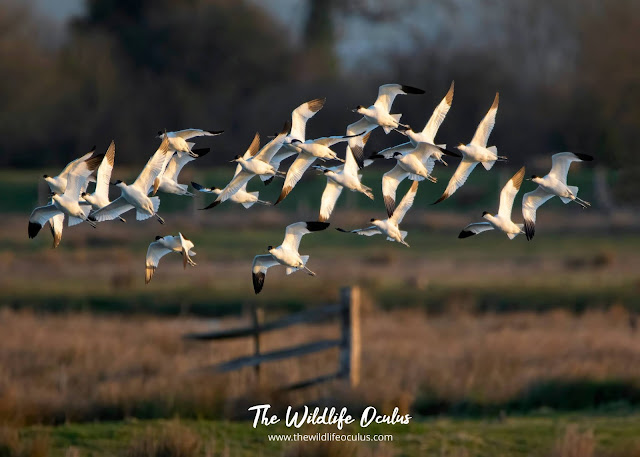 On Becs there was a large flock of Black Tailed Godwits. These are my favourite species of waders and they were looking rather dapper in their brick orange/red breeding plumage. The Godwits don't breed at Goldcliff but they always gather in good numbers at this time of year on the reserve. I am anticipating that later this spring many of them will travel North to breed in Iceland and then they will return in the autumn passage. 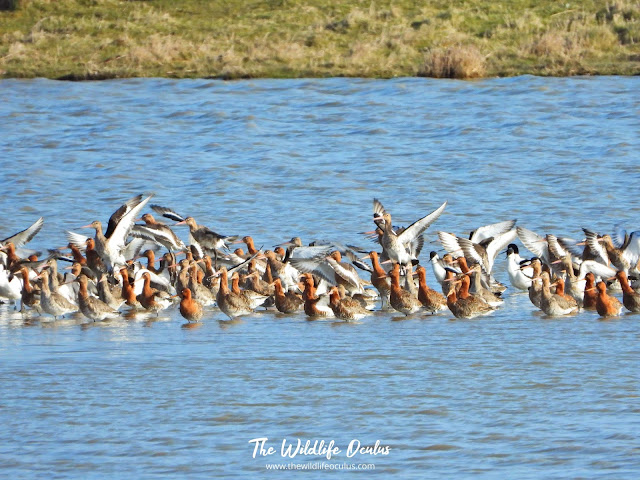 The cold wind eventually cut through all of our warm clothing and it was time to find some shelter in the seawall hide.

En-route the Avocets rose into the air like an exploding checker board. Panicked piping calls rang out all over the lagoons. There was something out there scaring the hell out of them - perhaps it was a raptor stalking the edges of the reserve. Whatever it was did not show its face.

From within the seawall hide I had a panoramic view of the reserve with lots of birds on show. I was in wader heaven at last again. Every now and then the Avocets and Godwits would get skitterish and take to the skies putting on quite an acrobatic display. 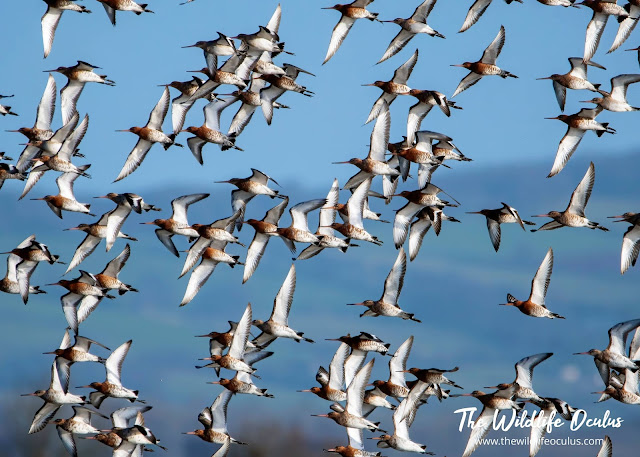 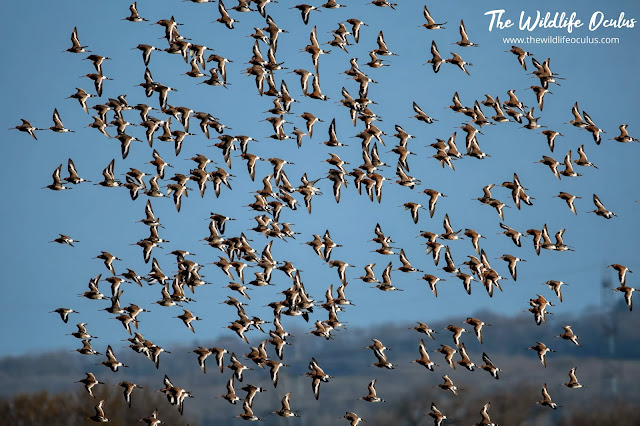 The odd one out today for me was seeing a Knot in with the Godwits.

I found one ringed Black Tailed Godwit and will be reporting the sighting to see if I can get some history about it.

The waders were not the only birds "flocking". Soon I was joined by more "birders of a feather that flock together". Keeping a good social distance apart my highlight of the day was getting to see many of my good friends - Nic (My Amigo) , Sarah,  Video John , Tim, the "Pauls" and many more during the morning.

Having so many sharp eyes on the reserve always results in some great finds and I must admit I think the pic of the day goes to my friend Paul Coombes who snapped a female Merlin perched on the sea wall. What a beautiful bird.

No sign of the Glossy Ibis. I have not seen any reports of them being observed since December. I checked out the Boat Lane and Redhouse Barn area and had no luck.