The lull is over 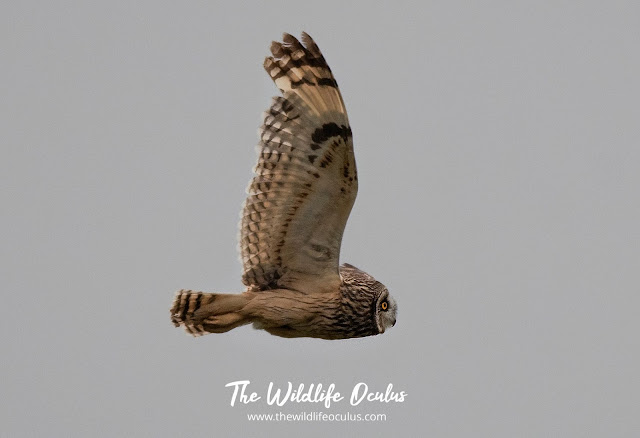 In my last blog post about Goldcliff Lagoons, I mentioned that the reserve was going through somewhat of a "lull" period - the calm before the storm of autumn migration would be upon us. Well, I think I can say I grossly underestimated how long this quiet period was going to be as by the looks of things this week the autumn migration has well and truly started.

All I have seen on the social media platforms over the last week or so has been reports of some great sightings. It started with a Rosey Starling being sighted at Peterstone and then Sudbrook. Next up was a Blue Budgie on Goldcliff Seawall ( obviously an escapee but it looked really cool). Then it was Wood and Green Sandpipers, Knots, a Little Stint, Spoonbill, Common Terns, and yesterday a Short-Eared Owl.

I felt like the world was passing me by whilst I had my head down earning a living. I was keeping my fingers crossed that something good would turn up when I next visited.

There was a red sky last night, and I thought of the old rhyme, "Red sky at night shepherds delight and red sky in the morning shepherds warning". Well to be quite honest what a load of codswallop.

This morning's weather was absolutely shocking and nothing about it was delightful unless you like a bit of rain.

I walked into the reserve during a rainstorm and scurried quickly into the first hide. Fortunately, there was hardly a breath of wind so the hide was nice and dry. Sometimes at Goldcliff if the wind whips up sitting in the hides during a rainstorm looking out through the windows can be akin to being blasted in the face by a powerwasher. This morning it was nice and sheltered instead. The first lagoon - known as Monks, is starting to dry out somewhat. The section nearest the hide is just mud but further up near the Redshank Platform the water is shallow and perfect for waders.

I decided to move on to the second hide where I could see a flock of waders was feeding opposite it on Monks Lagoon.

I was soon joined by my birding friends Paul "The Happy One" Joy and  "Togger" Neville Davies.

It was good to have their company and the banter was great this morning. Nev is going through a bit of an identity crisis at the moment and we had an interesting discussion about the pros and cons of DSLR cameras v bridge cameras, Canon V Nikon, and the merits of being in either the "Birder" or "Togger" camps ( or indeed having a foot in both). Honestly, I think it would make a good comedy sketch.

Whilst we had a giggle we scanned the lagoons for birds. The Redshanks remain showing in force. They are all over the place at the moment. A Common Sandpiper put an appearance in on the mud. Pied Wagtails were numerous, many of those we sighted being juveniles. Between the downpours mixed flocks of hirundines swept in feeding on airborne insects.

Entertaining us with some bird songs was a Cetti Warbler, Linnet, and Reedbunting. To cause some havoc a female Marsh Harrier quartered the lagoons and cleared it of a large proportion of Redshanks. There was a steady influx of Black Headed Gulls coming into roost before high tide and two Lesser Balck Backed Gulls.

Incredibly - the sun started to peek through the clouds most unexpectantly and we seized that moment to head to the seawall hide. En route, Nev showed me a Pyramidal Orchid he had found previously. A pretty plant but not quite as good as the Bee Orchid in my opinion. 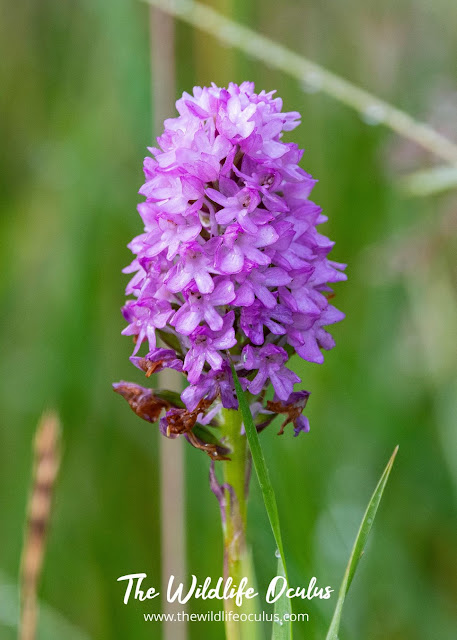 I must say the reserve is looking amazing as the grass remains uncut and it just looks so "wild" and there is just so much more to look at and find. The meadows are full of wildflowers and there are some amazing patches of purple vetch. 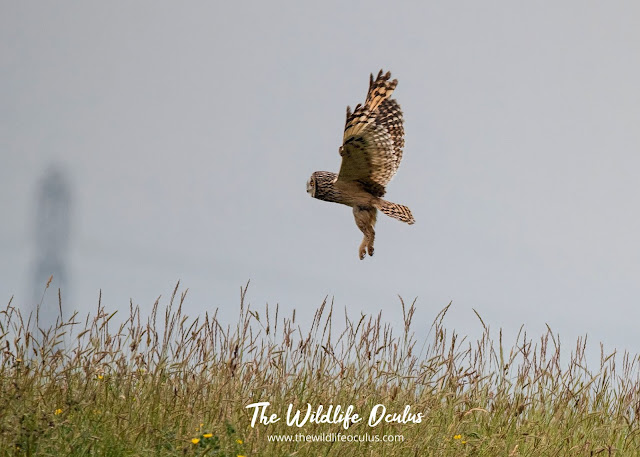 It was soon time for some breakfast in the seawall hide and another opportunity to put the world to right. I think as we were discussing the really annoying issue of people failing to use motorway slip roads correctly Paul Joy almost choked on his sandwich when he jumped up pointing excitedly outside of the hide "Look there is a Shorty".

I was already on the move to stand at the hide entrance and quickly focussed my camera ( and Nev, please note, it was using my DSLR) and then hit the shutter release button and did not take my finger off it for a few seconds. There are those out there who like to "remark" why do you photographers take a lot of pictures these days and question why we often shoot at 12 FPS. My first response with a smile is usually - "because I can". Admittedly there is a time and place for using "full-auto machine gun mode" as some might call it. Static subjects like an Orchid would be overkill, or if you are in a small hide trying to be quiet and you don't want to disturb the subject. However in reality, especially when taking pictures of flying birds I want to maximize my chances to capture action, especially unique and unexpected moments, and to ensure I get a pic in focus- because believe it or not even the best auto-tracking lose focus. Taking pictures on a single-shot mode like a sniper just does not work in these circumstances - especially when I am also shaking with excitement.

I just managed to grab some pictures of the Short-Eared Owl as it flew slowly quartering the long grass that is growing all along the sea wall near Becs Lagoon and the back of the seawall hide. There has only been one previous occasion that I have been fortunate to see a Shorty at Goldcliff this close and it was several years ago in November. I must admit I am a little shocked to see one on the reserve at this time of year. Perhaps the overgrown grass is now home to a bumper population of voles and mice and has attracted an owl in whilst on passage.

Short-Eared Owls can travel huge distances in search of food and they will often hang around if there is some sort of vole population explosion happening in an area. It appeared to be hunting in earnest. It flew off to the far side of Becs and moved from one fence post to the next whilst hunting in-between. 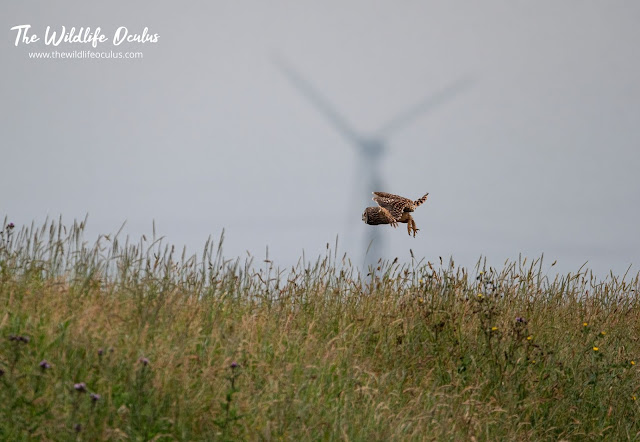 Eventually, it flew off over Goldcliff Pill towards the saltmarsh. I hope it stays around as the are fantastic birds to watch and photograph.

As high tide approached Becs Lagoon had a few species of waders to note. A couple of Red Knot in partial breeding plumage, a small flock of Black-tailed Godwits that also looked rather dapper in chestnut red breeding plumage. A flock of Redshanks made up the bulk of the waders and they were joined by a few Dunlin. In the distance perched upon an old pipe sticking out of the mud was a Common Sandpiper.

Swallows, House Martins and Sand Martins performed aerobatics in from of the hide and occasionally perched up and the fenceline was alive with Pied Wagtails, Reed Buntings, and Linnets. A solitary Curlew came in to roost but there were more of them out on the Saltmarsh. 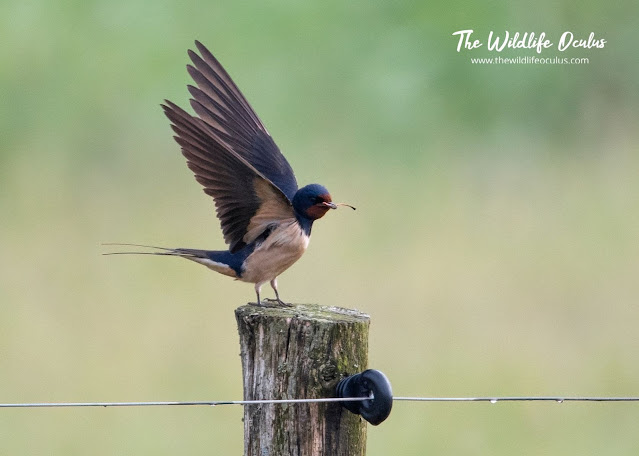 A Kestrel took over the hunt from the Short-Eared Owl and was hovering above exactly the same area as its competitor had been earlier. To finish off a rather striking male Marsh Harrier swept over the reed beds of Becs and then drifted away back over the pill. 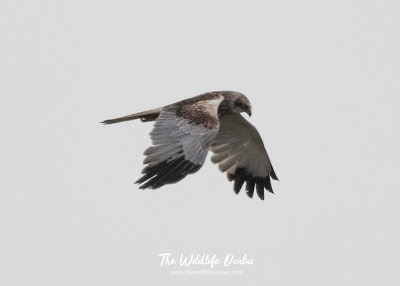 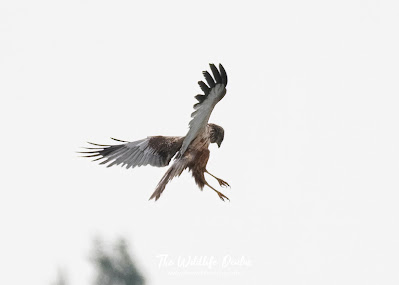 I must admit despite the dismal start, everything turned out a great deal brighter. I really needed a boost today after a long week of work and departed the reserve feeling loads better and having left all my troubles behind.  Birdwatching and banter with good friends was just the tonic - another great day was had at Goldcliff - it never fails to delight me.