One of my biggest disappointments was not being able to travel on a "Three Amigos" trip to Skomer and Bempton Cliffs last year due to the covid-19 lockdown. Our plans were put into disarray and resulted in no away trips with all three of us friends - Nicola Johns, Paul Joy, and myself in 2020.
With the restrictions easing, we could book up a trip when all three of us could make it. So finally on in July 2021 the "Three Amigos" rode again and off we went hurtling West along the M4 motorway full of excitement with a 10.30 am boat trip to Skomer booked up ready and waiting for us. There was one potential  "show stopper" we were worried about - the weather.
The skies were thick with clouds and there was a constant drizzle. We hoped and prayed it would ease off. Thankfully by the time we pulled up in the National Trust Car Park at Martins Haven, the rain had petered out and things were looking a lot more promising.
Incredibly we were the first people to arrive. The new online booking system that is in place means no panicked, rushing to get to Martins Haven to wait in a queue of people hoping to get a ticket. You even can follow a Twitter Feed on which at about 7.30 am they inform followers whether the boat is running or not. It is a massive improvement compared to previous years. The anxiety about getting a ticket has been completely removed and the booking process is now massively improved.
On this visit, I came equipped with my DJI Mini 2 drone. I had no intention of taking it to Skomer but I did want to fly it over the headland (Deerpark) near Martins Haven, to capture some aerial pictures.
After a quick march up to the headland, it was time to get back to Martins Haven to meet up with my amigos and catch the Dale Princess boat to Skomer.
I always enjoy the short boat trip over. This year due to the Covid restrictions there was a lot more space on the boat. This is a big improvement as in previous years they have crammed as many people on the boat and I have always felt like a sardine in a can.
One of the crew members was also very enthusiastic and after the safety brief spoke energetically about the island and wildlife which I found very engaging.
I had a plan this time when I visited. Earlier this year when I visited in June I had walked straight to the Wick for the usual Puffins with fish in their mouths. This time I wanted to try a different route to the Wick that would take me to Skomer Head. After the mandatory briefing from the Deputy Warden. She was full of enthusiasm for the Island and gave a very detailed introduction to the Island. Perhaps a little too long for my tastes on this occasion as I was foaming at the bit to explore myself, especially when a flock of 12 Chough flew directly over our heads. It was a feat of incredible restraint that none of the Amigo's dared to start taking pictures during the talk.
Then, finally, we were free to go. On this occasion, the Amigo's decided to split. I vanished into the distance moving up the killer of a hill that leads into the Island.
Soon I was at the farm and moving beyond it. I hoped to spot a Short Eared Owl but had no luck.
The route that took me to Skomer Head passed through a large expanse of land occupied by lots of Lesser Black-Backed Gulls and the odd Greater Black-Backed Gull.
It appeared that this location was a favored spot for gulls to breed. On outcrops of rocks, I saw several gull fledglings accompanied by one of the adults.
However, in almost every patch of grass, I came across I found a pair of Oystercatchers. It is not that often I can get close to these fantastic-looking shorebirds. There is a lot more on Skomer than just Puffins. The Oystercatchers were keeping a close eye on the gulls and whenever one of the gulls dared to fly too close to them they would pipe out a distress call and then take to the air and mob the gull relentlessly.
I suspect that there were chicks close by hiding in the undergrowth which they were doing their best to protect. When you see how many gulls are on Skomer it is truly an amazing feat if any of the Oystercatcher chicks survive at all.
As I followed the path Meadow Pipits took to the air. These small birds were everywhere I looked and many were perched upon fern fronds or hiding among the Red Campion flowers.
As I arrived at Skomer Head I was greeted by a juvenile Stonechat. It was very accommodating and kept me company whilst I sat for a breather and enjoyed the view. 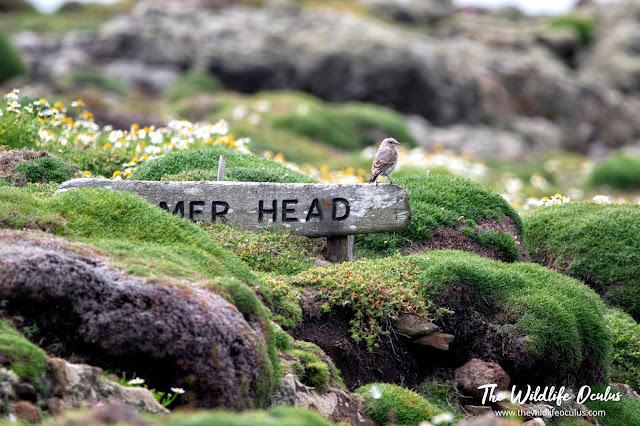 Looking out to sea I had a great view of the gannetry on Grassholm. It's a place I have tried many times to visit and failed due to poor weather. One day I will get out there to photograph the gannets.
As I sat there admiring the view I noticed something else watching me closely. Two pairs of long ears stuck up from behind the small hillocks betrayed their presence. Skomer is home to lots of Rabbits which are the architects of the warrens that honeycombed the island and provided lots of safe places for seabirds such as Puffins and Manx Shearwaters to shelter and breed in.

I love how all the wildlife on Skomer is somehow interlinked and different species depend on each other in wonderful ways. If there were no rabbits on Skomer I very much doubt there would be enough burrows for the Puffins and Shearwaters to breed. In turn, I wonder if all the seabird poo helps fertilize the soil and ensure there is plenty of vegetation for Rabbits to feed upon.
I then started hearing an Oystercatcher continually piping an alarm call. I wandered a little around Skomer Head and soon located the Oystercatcher perched on the edge of a cliff. As I watched I noticed that it was keeping a close eye on its youngster that was walking around precariously close to the edge.

This was the first time that I have seen an Oystercatcher chick and I enjoyed my time watching it under the close supervision of its parent. Again I was amazed at how it was surviving with so many predatory gulls around.
You may be noticing a little trend so far in this post - no pictures of Puffins yet. As I mentioned earlier there is more to Skomer than Puffins ;)
Inevitably my journey would take me to a Puffin hotspot - The Wick, but before I reached it I had some amazing natural vistas to behold first.

The headland is home to thousands of Guillemots and Razorbills. If you look carefully in one of the photographs you will also see the gull-like Kittiwakes. When I was scanning the cliff faces I noticed three researchers who had bravely climbed down some of the rockfaces.
It was soon time to get moving. That's the thing with Skomer trips, unless you stay overnight on the island you are always pushed for time if you wish to maximize your visit. You cannot dally for long anywhere.
As I made progress along the path to the Wick the view was fantastic. There were the pink carpets of campion flowers, Yellow and White of Mayweeds, grey and black volcanic-looking rocks, and the azure color of the sea.

Inevitably I reached "The Wick". It's probably the most photographed spot on Skomer.  It is a great location to watch Puffins descend from the sky with beak fulls of fish in their mouths. But there is lots more to see as well. The huge cliff face which dominates The Wick is home to thousands of seabirds that breed on the skeet cliff faces. How they manage to lay eggs that don't roll off defies belief and what's more many of the seabirds to look incredibly ungainly, so it is a true marvel that they can perch on tiny shelves of slippery rock.

One species of bird that has always fascinated me is the Fulmar. These birds nest on the cliffs and can be seen quite close up from The Wick. They are relatives of the Albatross and like a lot of species, these days are not exactly what you would describe as common. They have broad, straight wings and tubular nostrils that make them easy to distinguish from a gull.

Fulmars appear to be very social and spend a lot of their time flying back and forth to the nest and noisily greeting their mate and even their neighbors before flying off again and soaring high above the sea.
Inevitably my attention was drawn to the most charismatic birds on Skomer - the Puffins. I have never tired of taking pictures of them despite the fact I have visited Skomer on many occasions.
It was good to see som many bringing beakfuls of fish in for their chicks. Apparently, according to one of the crew members of the Dale Princess, it has been a very good year on the Sand Eel front and the Puffins have been making the most of it.
The Wick made a good meeting point for the Amigos to eventually gather for a quick catch-up and a chat. Paul had gone a-wandering again and reported in having seen one of the Short-Eared Owls near the farm and Nicola had spotted the flock of Choughs.
Paul wanted to linger at the Wick and take some flight shots so Nicola and I headed back to where you catch the boat.
The hill leading down to the warden's meet and greet areas is also very good for flight shots.  I find the flight shots take quite a bit of patience and timing. After about twenty minutes of tracking birds with my Nikon D500 and Sigma 150-600 mm lens, my arms start to ache and sag as it gets quite tiring.

Whilst taking flight shots we noticed that a Great Black-Backed Gull had managed to pull a Manx Shearwater chick from its burrow and was busy dispatching it with several powerful pecks of its vicious beak. The Gull then proceeded to swallow the dead chick on one big gulp. I know it's nature doing its thing but it's not the nicest of things to watch. These big gulls are truly monsters. 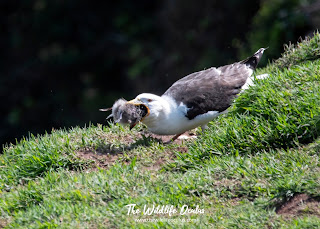 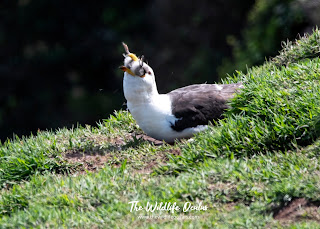 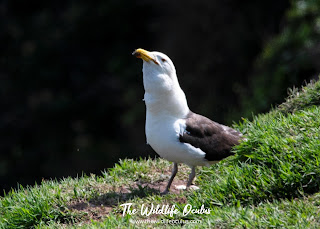 The hours pass by quickly on Skomer - especially when you are enjoying yourself. It was soon time to go. As ever it had been an absolutely fabulous experience and on the return journey, I was already thinking about planning our return next year.
We finished off our visit to Martins Haven with a walk along the coast in the Deerpark. Once again I put the drone up and enjoyed some spectacular views.
The whole trip had been fantastic. Skomer never really disappoints and we were fortunate with the weather so we could see it at its best.
All that was needed was a nice cold drink with my mates before the journey home.
Labels: aerial drone Puffin Skomer