A sunny spot at Goldcliff Lagoons 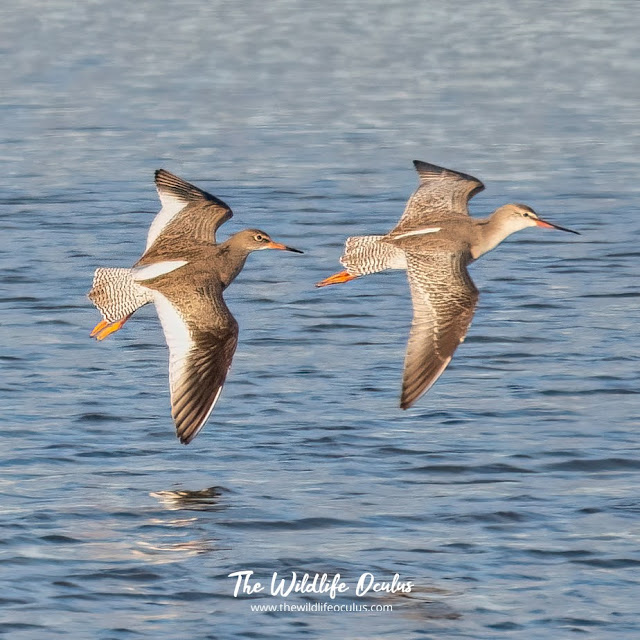 Up at stupid o'clock again this morning with my friend Paul Joy hoping for a glorious sunrise. The weather gods were a little fickle this morning and we found ourselves standing on Goldcliff Seawall staring disappointingly at a big band of clouds on the eastern horizon, that was going to spoil any chance of seeing the sun.

It was nice though - the estuary was quite becalmed. That stillness which occurs when you can feel the energy charging up, just before everything starts to wake up. Out on the foreshore, we heard the haunting calls of Curlews and bleeting of Oystercatchers.

I could have done with a nice cup of coffee in my hand, as I still felt a little half asleep if I am honest - it was 6 am after all.

Twinkling brightly above the band of cloud set in a clear sky was the planet Venus. Below just on the horizon, an orange glow was starting to burn through heralding the coming of dawn.

After pausing for a while to contemplate the approach of a new day we decided to head for Goldcliff Lagoons instead and go and find some birds to watch.

We met up with Video John at the entrance to the reserve and made our way in. My goodness, the reserve is muddy at the moment. Make sure you are wearing some wellies as its a like a quagmire. Some areas would make a Hippo very happy indeed.

Initially, Monks Lagoon had a few birds. A small flock of five Black Tailed Godwits, a lapwing flock, Shelducks and quite a few Wigeon.

Paul and I decided to head further into the reserve leaving Video John to himself as he was mesmerized by a singing Blackbird. The morning was certainly about to break, dawn was imminent but it remained quite cloudy.

As we walked towards the Snipe Platform a ghostly shape could be seen quartering the banks of Priors Lagoon. The most photographed bird in Gwent was putting in yet another appearance - the Barn Owl was still working hard hunting just before sun up.

An incredibly beautiful bird. I have rarely seen a Barn Owl throughout my life. It took me fifty years to actually get a decent photograph of a wild one. We watched it from a distance from the Snipe Platform. At one point it came quite close. Later as we walked towards the seawall it was seen perched upon a post. It didn't hang around for long before finishing its night shift and heading off to roost.

The Marsh Platform is like a complete mud bath so we did not dally there very long. A female Marsh Harrier quartered Priors Lagoons reedbed and caused some chaos. A flash of black and white drew our attention and then we noticed a flock of Avocets flying around in a bit of a panic. The pied coloured birds eventually settled on Becs Lagoon.

Trudging wearily through the mud as we walked to the Seawall Hide I was serenaded by Cetti's Warbler, Reed Buntings, Stonechats and Pauls's heavy breathing :) It was hard work getting through that mud.

Eventually, we made it to the Seawall Hide. As usual, it was like a freezer. The wind is always in your face when you sit in the hide and it can get into your bones. Out on Becs Lagoon, we counted 22 Avocets. They were floating about like ducks. It's quite funny to see them like that.

There was quite a high tide and soon in came a flock of Oystercatchers that were piping alarm calls as they flew over. Then a big flock of Black Tailed Godwits swooped over the reserve coming from the direction of the pill. They put on quite a show of aerobatic formation flying but just could not decide where to settle and they disappeared from sight after flying low over the seawall hide.

In amongst the flock of Godwits was a single Knot.

Next up was a Dunlin flock that whizzed by the hide. They zoomed rapidly around the reserve before descending down to Monks Lagoon - all the way on the other side of the reserve!

Paul was busy about to start munching his sandwiches and Video John had caught us up so I left them to it for a while as my enthusiasm for getting some wader flock shots got the better for me.

I turned on my 4 x 4 rally mode on my wellies and hit the turbo button and rapidly trudged, skidded and slipped my way back through the muddy reserve to the Redshank Platform.

The sun had finally broken through the clouds and the whole reserve was now basking in golden sunshine.

I found myself eventually stood on my favourite platform - The Redshank Platform. From there I had a view over Monks Lagoons and to my delight a flock of some 300 Dunlins had settled down at the edge of the island.

At last, lots more waders at Goldcliff Lagoons - I must admit I was elated. As I trained my lens on the flock, up they went swirling around Monks Lagoon and on occasions flying straight in front of me. The light was amazing and I managed to capture some nice flight shots.

Opposite me on the far side of the lagoon were three Redshanks. One of them looked different , its plumage was lighter on its underside and the beak was pointed. It all seemed to feed differently. It was as Spotted Redshank - probably the same one that I saw last Sunday.

Once again the Dunlins took off in a panic and then everything went up - lapwings, Ringed Plovers, Redshanks and ducks. I am not sure what was the cause but there was a Buzzard on a post on the edge of the reserve,

As the Redshanks did a fly past I grabbed some photographs. I am glad I did as when I reviewed them later I had caught the Spotted Redshank in flight. The pictures are good for learning how to tell the difference between the two species of Redshank.

The Dunlins eventually calmed down and settled in the middle of the island on Monks. I have not seen a big flock of birds choose that spot before.

I was then joined again by my friends Paul , John and Tim and we enjoyed a good chat whilst getting a good dose of sunshine and vitamin D.

Paul was covered head to toe in mud. He had been doing his own acrobatic display today and had face planted when he slipped walking down the slope at the back of Hide 2. Incredibly his Canon camera survived a fall as well. I think next time he should concentrate on where he is walking rather than being distracted by  looking in envy at Johns better Nikon camera ;)

Later we checked out Priors Lagoon again and found a flock of 62 Avocets floating on the water.

The numbers of Avocets should now steadily increase. It will be good when we can get a view of their legs as I am hoping one or two of them will have coloured rings or tags like last year.

So another good visit at Goldcliff. Spring migration will be gathering momentum now in the coming weeks.

Many of us are already taking bets on when we will see the first Wheatear. Yesterday someone saw a Sand Martin come through which was a great spot.