Reeding the signs of nature at Newport Wetlands

Today has been very much about looking for wildlife in, above or next to reed bed habitat.

An early start at the RSPB Newport Wetland Center meant that it was almost devoid of people ( meaning less disturbance). I was hoping the Marsh Harriers or Bearded Tits would make an appearance. Neither did.

Progressing at a steady pace through the reserve , I noticed that there was some good signs of life however. Two cuckoos were calling across the reed beds at each other and I was certain that I heard the booming of a Bittern calling.

As I stood on the pontoon bridge basking in the light of the mornings rising sun I was excited to see a Bittern flying down the reen towards me. Bitterns are not something you see very regularly so was a good spot and made my morning.

There was a lot of bird calls coming from the reeds. At this time of day the reed beds are full of the noise of birds singing and proclaiming their territories.

Spying through the reeds I was able to get a look at a Sedge Warbler singing its little heart. I was a struggle to get a clear view of anything feathered as they all seemed to want to tease me with partial views.


There was plenty of Reed Buntings around displaying so managed to get a reasonably  clear shot of one of the males.

The reens this morning had a lovely mist covering them which started to burn off in the sun. I can't say I am a great fan of Canada Geese but the picture I took  kind of captured the feel of the morning.

Whilst making my way out of the reserve I came across some loud trilling from top of some hedgerow and looked up to see a White Throat. He was blasting away giving his best to sound impressive. 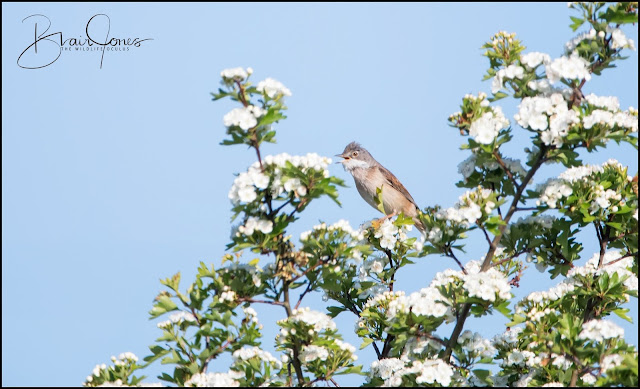