Out on a whim

This weeks weather has meant some fantastic spring time weather with lovely blue skies. The impulse to escape to the enjoy the wildlife from the house has been hard and now the evenings are longer I am unable to resist the inner "calls" to go to Goldcliff for some bird watching.

So on a couple of evenings this week I have found myself enjoying the sunny evenings at the reserve and stayed until sundown.

The sunsets have been nothing less than spectacular this week. Really amazing colours and I have made the most of when taking some naturally vivid looking pictures. 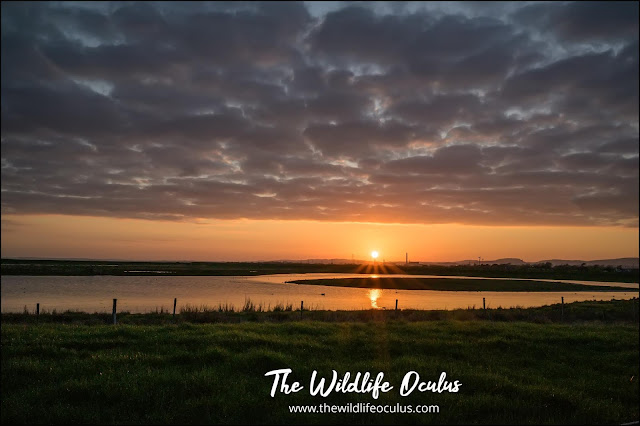 Life at the reserve is on the change. A number of the bird species that live withing its boundaries are now getting down to the business of breeding. Most of the birds have paired up. Avocets, Little Ringed Plovers ,Oystercatchers, Ringed Plovers , Redshanks, Canada Geese, Greylags, Shelduck and Lapwings are all at the start of their breeding cycles. Throughout the day you will now see quite a few birds even at low tide.

Some species however appear to have departed. The big flock of Black Tailed Godwits ( and a few knot) appear to have left. I suspect many of them have headed North to Iceland/Scandinavia to breed.

The Wigeon also have vanished and have no doubt followed their instincts to head to their breeding grounds.

Spring is also a time of arrivals. Not all stay for long. Some are known as "passage birds". These are species that use the reserve as a stop off place - almost using it like a service station whilst on a longer journey. They take a break, feed up and rest before moving on.

One of these species I was lucky to see with my friend Nev on Wednesday. A pair of Whimbrels were observed feeding with a Curlew in a field at the rear of the Snipe Platform.

Whimbrels look very similar to Curlews but are a lot smaller. They can be very difficult to tell apart to those unfamiliar with the species. Its very much easier to distinguish the two species apart when they are together. You can clearly see the differences, size being the main one, but the eye stripe and the shape of the bill are also features that you can use for identification.


Whimbrels get their name from their seven note call. Its very different to that of a Curlew. They are a migratory species and breed in Northern Europe and Iceland. Spring birds are probably headed for Scandinavia,Greenland and Siberia but some "may" be Icelandic birds. There is a small number that breed in the North of the UK in the Shetlands but these are rare birds. They are schedule 1 listed.

They are long distance migrants.The majority of  Whimbrels are thought to spend the winter months of the coast of West Africa but some have been known to reach South Africa.

I had the opportunity to capture some video footage of the Whimbrels as they fed in the field with the Curlews. I must admit its incredible to think we were witnessing probably two birds that have just arrived after flying all the way from Africa.


Amazing to think that they had decided to drop in at a little wetland reserve in Newport. It just goes to show how important small areas of land on the Gwent Levels can be for migratory birds. Again this demonstrates the importance of preserving the habitats of the levels ensure these long distance migrants that depend on it keep on coming.