Up at the crack of dawn

If your into photography and wildlife you have probably heard of the "Golden"  Hour. Its a time that spans either side of sunrise and sunset. The light is always at its best and can often be quite spectacular. Its also a usually a great time to watch wildlife. Both are important times of day marking the change of day and night and its fascinating to watch how the rhythms of life change.

Getting up early for sunrise can be a challenge. In fact you have to wake well before the sun rises in order to travel to where your going to be setting up. I got up early on Good Friday and Easter Saturday.

I headed for one of my favourite locations to watch the sunrise - Goldcliff. Not on the reserve but close by on the seawall. You get a good view of the estuary and the Prince of Wales bridge when you look East. 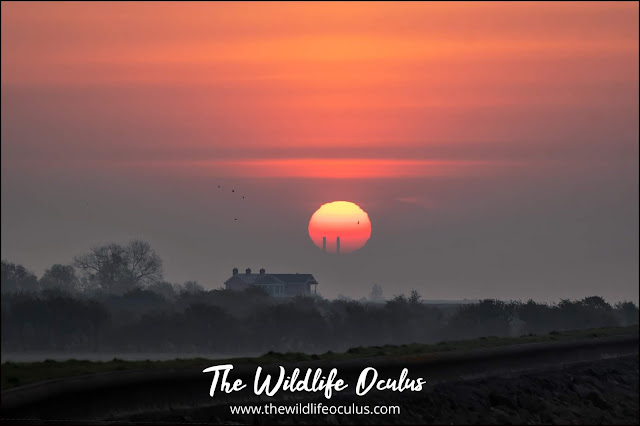 I found myself walking in the dark on both days with a magnificent full Moon at my back being serenaded by a dawn chorus. It was supposed to be a Pink Moon but to be honest I struggled to see any pink colour to it. 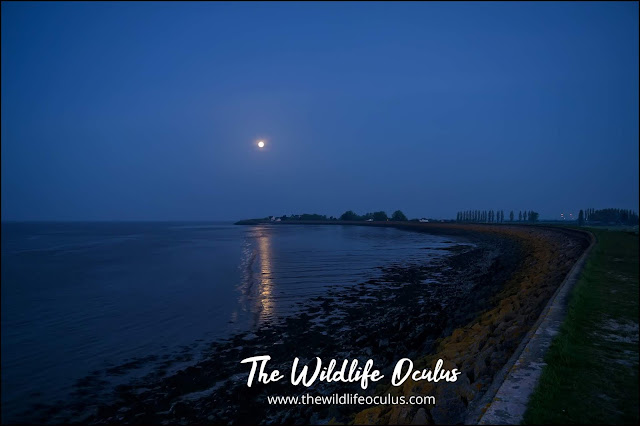 The reflection of the moonlight looked amazing as it shone across the incoming tide. I was lucky this Easter weekend as there have been some very high tides occurring not long after sunrise. Ideal for bird watching as you get a lot of birds particularly waders being forced into the lagoons.

Fridays sunrise was good but Saturdays was amazing. Both mornings I watched Curlews and Whimbrels feeding on small patches of mud as the tide came in and then they would fly up and move around to the bay near the house where there was some exposed mud. I found some of the Whimbrels feeding in the fields along the wall.

I always aim to capture something different when I take pictures. I am not into copying other peoples pictures and try and be myself. One thing I do like is silhouette pictures of birds, especially when captured against colourful looking sky backgrounds. I got lucky with a Carrion Crow flying up where the sky had turned orange. 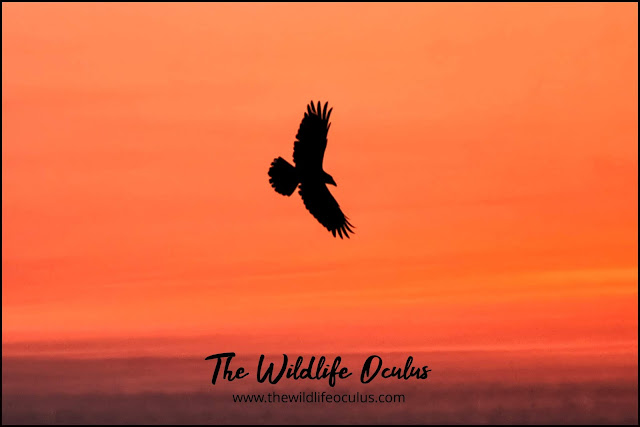 Along the wall I spotted several Wheatears. They were flitting up from the bastion rocks and then landing on the wall. Great to see in the low light with an orange glow from the sun. 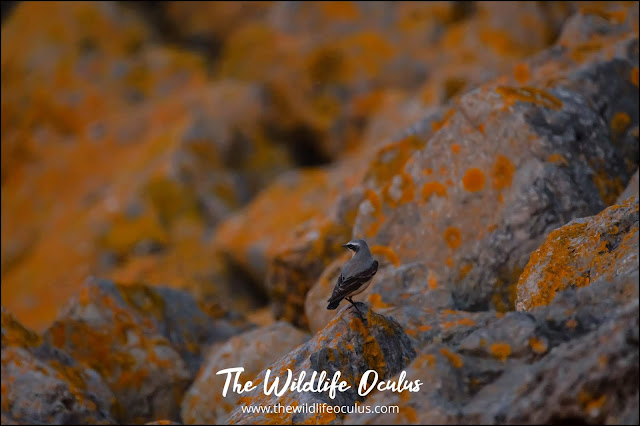 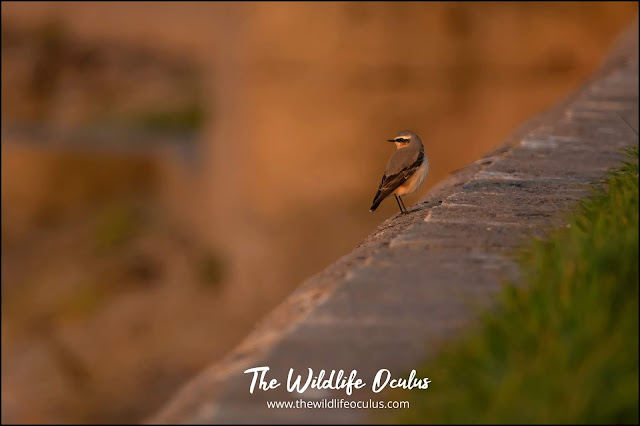 A great sunrise always lifts my spirit and on both days I found myself walking with a spring in my step eager to march to the lagoons so that I could get to work bird watching on my usual patch.

Friday when I arrived at the Lagoons I was accompanied by my friend Paul Coombes. It was his first time out at the reserve for a while and he was more excited than I was ( and I am always excited when I am at Goldcliff ).

At the Redshank platform from the moment we set up, a big flock of Black Tailed Godwits descended from the heavens. On about perfect timing. They filled the view finders of our cameras and all landed in Monks Lagoon. There was in excess of 150 birds. On the edge of the island they were accompanied by a flock of Dunlins. These small waders are another favourite of mine. Many of them were moulting into summer plumage. Its always worth scanning them for something out of the ordinary. In amongst them was a Golden Plover.

The Black Tailed Godwits were looking magnificent. Almost all of them are in summer plumage. I have got to the stage now of not making any further predictions on when they will migrate. I checked my pictures/records from last year and they stayed around in big numbers well into May. 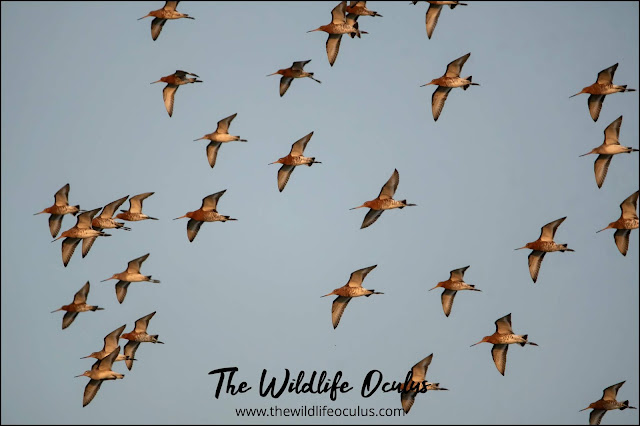 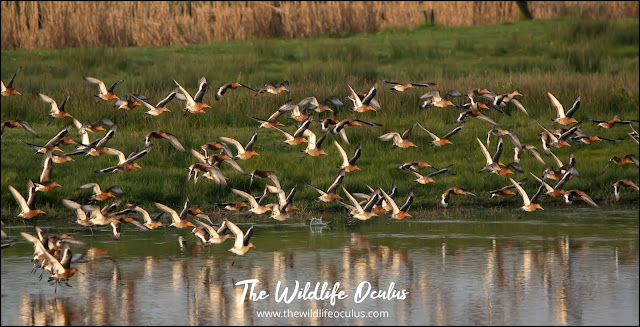 Both species put on a good show and on occasions they all took to the skies with some of the other feathered residents and put on quite an aerobatic display. Dunlins fly fast and whiz around the sky in a flash. Capturing them in flight is always a challenge. 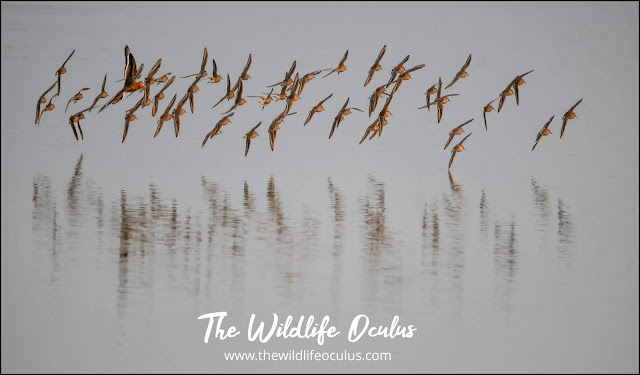 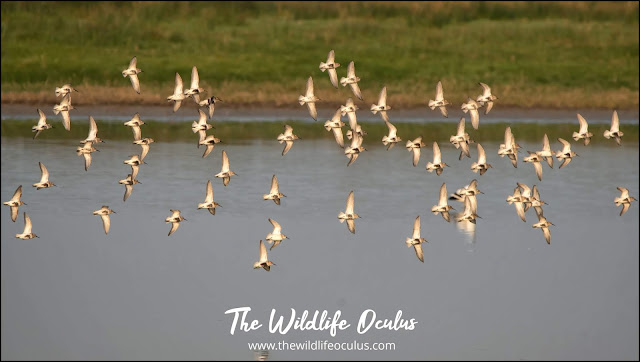 The whole reserve is now alive with bird song, especially from the hedgerows. At the entrance to the reserve calling from a Hawthorn bush in full blossom I am sure I heard a Grasshopper Warbler.
Chiff Chaffs , Blackcaps, Whitethroats , Reed Warblers , Reed Buntings and Cettis were all blasting out their tunes. In the sky above the lagoons Skylarks were singing their hearts out.

Life was everywhere you looked. The grassy areas and scrub were home to Orange-Tipped, Peacock, Meadow Brown, Tortoiseshell and Large White Butterflies. The air is starting to fill with black midges. All good stuff for the hirundines that have been passing through. 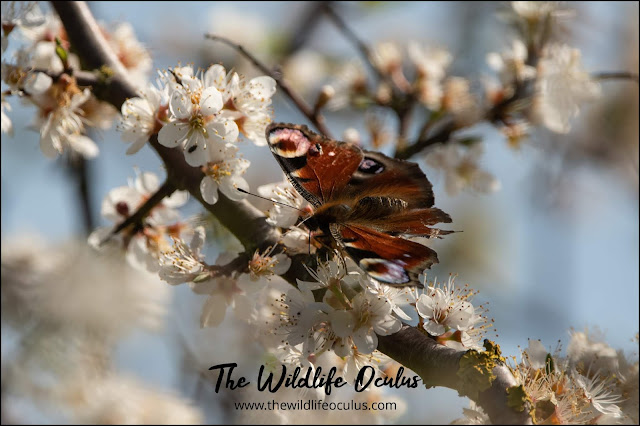 Saturdays visit to the lagoons was a similar day. Lots of Black Tailed Godwits and Dunlins especially. Remember what I said earlier - always check the Dunlins out for something unusual. Well Saturday I was accompanied by my birding pals Nev and the two Paul's. They got some sharp eyes between them and helped me pick out a Curlew Sandpiper. I took a video that helps to show the difference between them and a Dunlin. 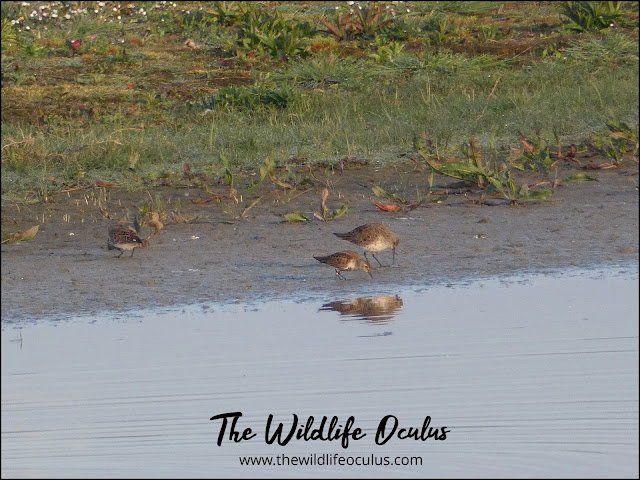 Walking around the reserve it was good to see the first Greylag goslings. They look so cute and their parents were keeping a close eye on them. Soon we will have more chicks from other species and I have my fingers and toes crossed that some of our rarer species have a successful year and survive. There was a general lack of predators the last couple of days but that will change as the breeding season moves along. 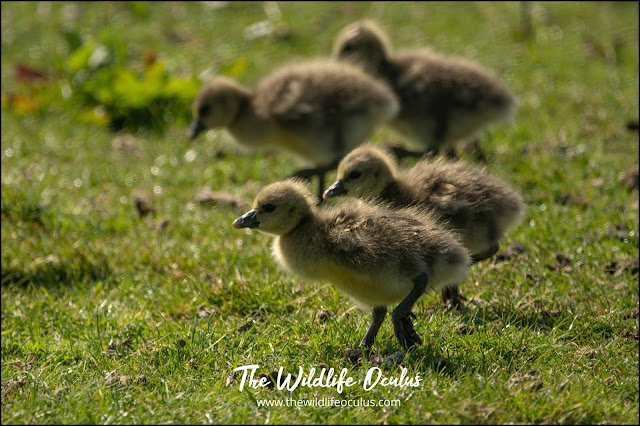 There was a lot of visitors to the lagoons on Saturday. At one point the seawall hide was full of birders and the company was great. On Becs (Lagoon 2) there was a big flock of Black Tailed Godwits , Curlew and some Whimbrel. Looking carefully we could spot a Greenshank. At one point we spotted four Wheatear perched together on some bushes between Lagoons 2 and 3.

A highlight of Saturday was when we caught sight of Water Voles in the reen near the first hide.
I have seen quite a lot lately but usually at dusk so seeing one out in broad daylight was a first. Its great to see that the reserve is home to a rare mammal. 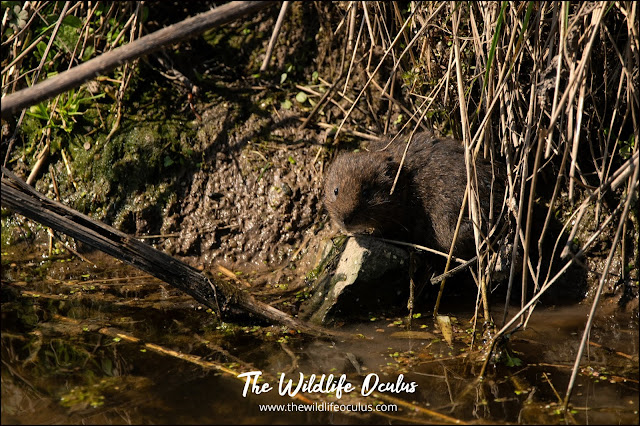 All in all its has been a fabulous couple of days. Notable in their absence was the Spoonbill and Glossy Ibis. I believe the Spoonbill has shown later in the day and has been sighted near Boat Lane a few times. Glossy seems to have gone AWOL over the last week.