Finishing the day on a high ISO

I was pretty much right on the money in my last post. I was speculating that Storm Ellen may bring in a rarety and it did. Two veteran birders of Goldcliff, "The Pointons"  found a Pectoral Sandpiper in front of Hide 1 on Monks Lagoons Island. Brilliant spot fair play.

Late on Thursday whilst a little light remained I decided to try my luck and see if the Pectoral was still hanging around.

On arrival at the reserve, the tide was already well in, and even from Hide 1, I could hear the waves breaking against the seawall. The wind was howling a gale but at least it was dry.

I tried in earnest to locate the Pectoral but the light was starting to fade already an hour before sunset and it had turned very cloudy.

All of a sudden there was something zooming past the hide and a Peregrine passed by my view in the scope and headed straight at a flock of Dunlins and Ringed Plovers. The flock exploded and then shot around the lagoons in a flash of three hundred birds or more.

The falcon continued on and made a turn toward Becs Lagoon aiming at the big flock of Black Tailed Godwits. By the time I had got my camera the whole sky was full of panicked waders of all kinds. It was amazing.

I have not seen so many small waders in a long time and I love it when they start to hurtle low across the lagoons when startled. Unfortunately, the light was shocking so I had to ramp up the ISO and try my best to get some of the flock in focus.

The wader flock consisted of Ringed Plover, Dunlins, and Turnstones. Once things calmed down a little and the falcon had made off they would settle and start to feed all over Monks in large groups. Then one or two would start a cascade that would move throughout the flock until they had all gathered again.

As sunset approached I hear hundreds of Curlews calling. A massive flock too flight from the Pill and a big wave of Curlews flew in from behind where I was stood on the Redshank Platform. The birds then circled and descended on Monks and Becs. 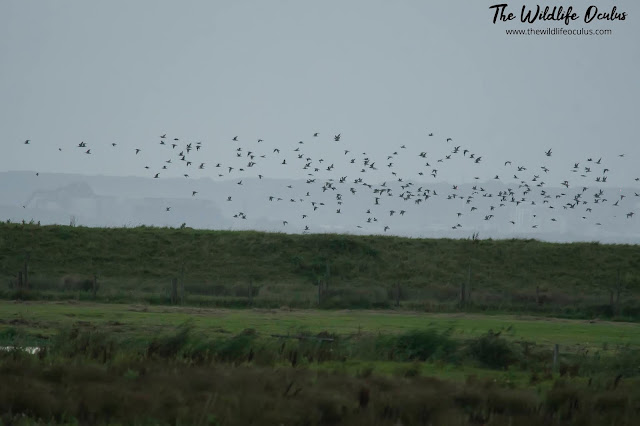 In the water in front of the Redshank appeared two of the Curlews smaller cousins - Whimbrels. They settled down and started preening.

Standing out in contrast to the darkening skies was a nice flock of Black Headed Gulls. They were quite nervous and rarely settled for long. I don't blame them as the Peregrine came in for another pass and put everything up again.

Eventually, the calm descended and the darkness came and it was time for me to return home. A great evenings entertainment. Shame I missed the Pectoral but lest hope its there on the weekend with a few Curlew Sandpipers for good measure.