At dawn this morning it was dark and miserable. My mood was not as bad as the weather conditions however as it was the weekend and time for more patch birding.

On entering the reserve the rain had eased off and I watched what I think maybe a pipistrelle bat coursing the edges of the hedgerows. Bats are not something I see that often at the reserve and was something different to watch for a change.

Doing a quick recon of the first hide I had a view out onto Monks of legions of Canada Geese. These birds have no difficulty in multiplying. Their numbers seem to grow every year exponentially.

Out on the shallow waters were a few redshanks, lapwings and Curlews. I had a good scan in the gloom and looked for my bogey bird this autumn passage - a Little Stint. I just can't seem to spot the little waders or I am just unlucky at the moment.

Moving on I stopped at the Redshank platform. A flock of Dunlin were feeding busily with some Ringed Plovers mixed in. No stints to be seen though other than juvenile Dunlins.

I then walked to the Snipe Platform. Priors Lagoon was full of birds. "Flossy" the Glossy Ibis was quite close and feeding with a big flock of Black-Tailed Godwits and a huge flock of Canada Geese. As I approached the screen the geese panicked and exploded into their air with a hell of a noise which resulted in everything going skywards including Flossy.

Just as everything was starting to get settled with the waders returning the heavens opened up with a torrential downpour that thoroughly soaked me. I had to return to the second hide to find shelter and dry off.

Eventually, I was joined by friend and fellow birder Nev Davies and almost immediately his eagle eyes picked out a lovely Spotted Redshank on Monks Lagoon.

It was a shame the light was so bad with the rain and all as the view would have been fantastic in a good light. The bird really was in fantastic breeding plumage. I have published the video on Twitter. It's not the best and record quality only.

There was plenty of birds to find. Six Snipe on the mud, Ringed Plovers, Redshank, Dunlin, Lapwing and two Ruff ( one of the birds was lovely red colour - possibly a juvenile female).

When the rain eased we had a walk around the reserve to the Marsh Platform. The Black-Tailed Godwits seem to favour this side during the day and they were busy feeding in the shallows of the lagoon.

What really drew our attention was the large numbers of hirundines that were zooming low above the seawall and the Priors. Swallows, House Martins and Sand Martins were busy feeding on airborne insects. It looked like an obvious passage feeding stop, the birds being en route back to Africa.

As we headed to the Seawall ( Avocet) Hide we noticed Wheatears, Linnets, Yellow Wagtails, Whinchats and Pied Wagtails feeding on the grass. They too are about to start migrating back south to Africa and are stocking up their energy reserves before they start their long flights.

Later we returned to the Marsh Platform and Nevs sharp eyes once again struck gold and found a Wood Sandpiper on Priors Lagoon. It was calling to another bird which I have been reliably told by one of my birding friends to be a Green Sandpiper ( not seen by us but I have heard later in the day other birder saw one).

I managed to grab a record video ( also on Twitter) of it before it flew off and was later found again on Monks Lagoon.

We also found three Common Sandpipers feeding on the mud at Priors.

I always like to take some pictures of the large flocks of waders and later review them on the computer where I can zoom in and take a more detailed look at them.

When I returned home today I noticed that one of the Black-Tailed Godwits had coloured rings on it.

I have sent the pictures off to Professor Jennifer Gill, School of Biological Sciences, University of East Anglia and been told that this bird was ringed in Hampshire. I am hoping to have some more information from the person that ringed it and will update the blog when I do so. 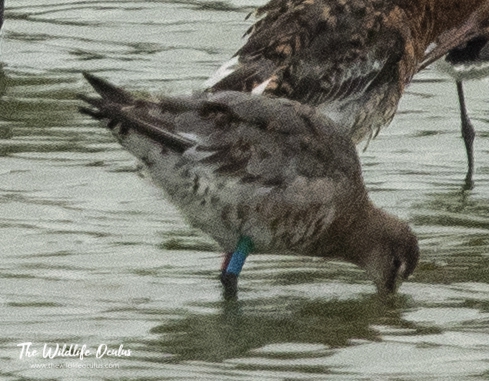 It is always very interesting to learn the history behind these ringed birds and Nev and I always like to follow up on them.

Despite the rain, there was plenty to see gain at the reserve. The rain never stops play for the wildlife they just get on with it - life goes on.

Ed- And isn't it typical later today some birders saw a Little Stint..grr