A good start to a gloomy morning

I must admit I struggled to get out of bed today. By my standards I am usually up and rearing to go whenever I have the opportunity to visit Goldcliff Lagoons. However I have had a busy week having seen very little day light to speak of, and generally have felt drained of energy. The short dark winter days don't help and the low clouds and mist don't exactly fill with me with lots of joy as it makes photography tough in poor light.

Nevertheless I beat the blues that have been plaguing me and met up with my friend Paul Joy before dawn at Goldcliff Lagoons. It was good to have some company and be able to have a chuckle, talk about "birds" ( the feathered kind ) and enjoy the reserve.

For a change it was not raining! It remains very wet and muddy underfoot, so if you are visiting I would recommend you take some wellies.  This week there has been some changes at the reserve. The NRW have finally taken down the "No Access" signs of the reserve hides and they can be "officially" accessed as long as visitors stay a social distant "2 meters" apart. They have also removed the doors of the hide. I guess that is to make the air circulate better.  I think its a good move by NRW and as long as people keep their distance and when necessary wear there masks, I think they should be safe to use.

Also in the news this week was a report by my friend Neville Davies of seeing a Spotted Redshank on Monks Lagoon and a Black Redstart on the sea wall. It is amazing how in the space of a week we have had two sightings of a Black Redstart in two separate locations.

At dawn from the first hide we could see a big mixed flock of waders on Monks Lagoon. Almost as soon as we got our lenses out the flock took flight and flew east. From what I could make out quickly in the gloom, it consisted of Curlews, Godwits, and small waders possibly Dunlin.

Scanning the lagoon we saw that there was a flock of thirty Curlews, fifteen Black Tailed Godwits and five Knot.

I could not make out any coloured ringed Curlews. A matter of minutes later a big flock of ducks, geese, more waders and Lapwings took to the air around Priors Lagoon and then the wader flock on Monks joined them. The cause of the disturbance was a female Marsh Harrier that flew over Monks and it began quartering the Pill. I then noticed another Marsh Harrier join it before they both went out of sight.

Monks was now pretty much empty, apart from Canada Geese and a small flock of about twenty Lapwings.

Next up was Priors Lagoon. It was pretty much a big duck pond apart from a flock of Lapwings. At the rear of the Lapwings was a solitary wader which was feeding busily in circles. It caused quite a bit of discussion. It remained dark and getting a nice clear view of it was not the easiest. Species were suggested such as "Ruff, Redshank - Spotted Redshank may be". I have studied my photographs and I now thinks its a Redshank. The bill looks too short for me. If anyone thinks different then please let me know.

From nowhere suddenly a female Marsh Harrier showed up and started causing havoc over Priors. It was very focussed on the reeds and dropped into them - and stayed there.

I was keen to take a look at Seawall to see if the Black Redstart was around. Sometimes these birds hang around for a while at the same location.

When we reached the wall the tide was now on its way back out. Like last weekend there was a small flotilla of small fishing boats out on the estuary and a couple of fishermen down on the mud. Things must be good at the moment - Paul thought that there may be a good run of cod or something.

Perched on the sea wall was a Stonechat and a Pied Wagtail. There was absolutely hoards of small insects swarming all over the sea wall. It almost looked like it was "raining" insects. No wonder the chats and wagtails were making the most of it.

They were not the only ones, as they were soon joined by a pair of Meadow Pipits. Looking out towards the Pill , five Barnacle Geese were feeding on the Saltmarsh with a flock of Canada Geese. It was so gloomy though and getting any kind of picture was impossible.

The last lagoon to check was Becs. This morning it was the quietest lagoon of all. Apart from the female Marsh Harrier putting in another appearance, there was very little to look at.

We returned to the sea wall as the weather began to brighten up a little. The general gloom did not lift much but there was just that bit more light.

I scanned the sea wall again and then caught sight of a little bird in the distance perched on he wall behind the Avocet Hide ( Hide 3). My heart rate shot through the roof as I looked down the lens and confirmed what I suspected - it was the Black Redstart!

The Redstart was accompanied by a pair of Stonechats and a Wren. They were feasting on the swarm of flying insects. The Black Redstart seemed to prefer picking off the insects that had landed on the wall whilst the Stonechats - almost Flycatcher like, perched on a rock and then flitted up into the air picking off one of the flying insects.

As the morning progressed the Redstart came a little closer. Whilst it never got within the "sweet spot" distance I was fortunate to take advantage of the Nikon P1000 x 125 magnification and get some good record quality pictures. 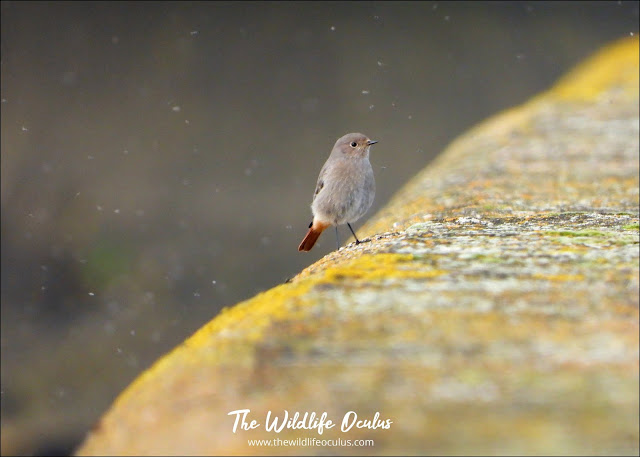 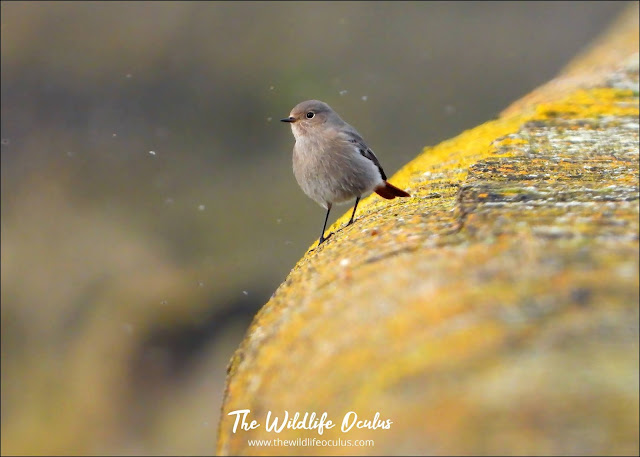 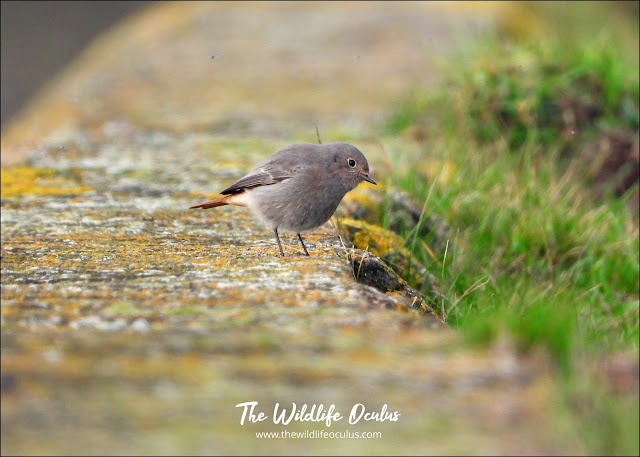 Elsewhere the foreshore was busy with bird life. Not that far away on the mud were several Oystercatchers and a flock of twelve Avocets. Further out were Curlews , Wigeon, Mallards and Wigeons.

The Lapwings flock took flight again and this time two waders split from them and I managed to get a distant flight shot of one of he pair.

To me, it looks like a Spotted Redshank? What does anyone think? Let me know.

On the wall we were joined by some of my good birding friends ( and readers). It was great to have a catch up.

To finish off the morning, we checked out Boat Lane to see if the Glossy Ibis were around but unfortunately they did not show today.

Have a good week readers - until next weekend, stay safe all.