The land of my fathers

Its been a while since I have last blogged. If I am honest I have been struggling with a bout of writer's block, working hard and been feeling rather gloomy because of the lockdown restrictions. My roaming of the Gwent countryside has been very restricted. It first started with Newport being off-limits and that meant my beloved Goldcliff patch was off-limits. Then Torfaen went into local lockdown. With the local lockdown in force, I headed to an alternative part of Gwent, the uplands of Blaenavon and the British. For me whenever I visit Blaenavon it's always special, the place holds a special place in my heart as its where a lot of my ancestors are from. Mining I guess is in my blood and a number of my relatives have worked down Big Pit. My father and I were lucky to escape it but I must admit every time I have gone down the pit it has been a great experience.

Blaenavon since the mining days has been transformed. I remember as a kid in the seventies visiting my grandparents at Garn-yr-erw and the whole mountainside was like some giant black coal tip. Now the town and surrounding area is a world heritage site. The mountains and lakes are a haven for both people and wildlife alike with some of the most amazing scenery in South Wales.

I enjoy walking around the Coity Mountain, Waunafon Bog - the source of the Afon Llwyd , Garn Lakes and the Blorenge. There is loads of wildlife and some fantastic habitats.

Before the welsh firebreak, I was lucky to spend a few weekends taking some long walks in the area and on several occasions was joined by my good friend Paul Joy.

As usual, I put in some dawn visits and one morning I was rewarded with my first sighting of a wild Barn Owl since 1993. I just could not believe it when the owl flew in front of my car during the early hours. Perhaps after the lockdown, I may get to see one again in the area.

I spent quite a bit of time around Big Pit. The Coity Tip that borders the museum offers fantastic views of the pit and surrounding area. Even during the autumn, I was amazed to see Stonechats continuing to chat on fence posts and there were flocks of linnets and Meadow Pipits all over the place. On one visit Paul and I disturbed a Red Grouse that was hiding under a bush.

On the Coity Pond, we found a flock of Wigeon. They were very nervous birds and whenever we got close they would take flight.

The pit seemed to attract a variety of birds. A flock of Jackdaws, House Sparrows and Stonechats. There is a rumour that on occasions even a Black Redstart can be seen. I enjoyed watching a Buzzard perch on the air circulation shaft. It seemed to take advantage of these man-made perches to watch the surrounding moorland. That's of course when it was not being harassed by a pair of Ravens and a flock of Carrion Crows.

If you keep an eye on the skies you may be lucky to a Peregrine or Red Kite circling above the tips. The Kites appear to be using the thermals rising up near the steep sides of the Coity Mountain.

The Garn Lakes is now maturing into an amazing nature reserve in itself. In the late summer months, there was a Great White Egret visiting the upper lake. Its amazing what may turn up. On a number of occasions, I heard the piping of a Kingfisher and then saw a flash of blue as it passed me by.

For a brief moment, the Kingfisher settled on a perch ahead of me and I was able to take few pictures before it flew off down a stream.

Waunafon Bog and the Coity Mountain appear to be quite harsh barren areas of moorland but they have plenty of birdlife. There is a pair of Kestrels that show quite often hovering above the long grassy areas searching for prey.

The Whistle Pub, a popular pub among my ancestors where many a pint has been drunk is home to a flock of Jackdaws. This species of corvid is one of my favourites. I love the colours of their eyes.

As the new year approaches it's worth keeping an eye out when walking Waunafon Bog for Short-Eared Owls or even a Hen Harrier. They may be already around but sometimes you just need a little bit of luck to spot them.

Paul and I checked out the old mine which was used by the BBC Coal House Series . It has now been left to rack and ruin.

The British is another great birding spot and Paul and I enjoyed a great walk there finding a small raptor rich valley. A pair of Peregrines dived above our heads and seemed to be mobbing a Buzzard. 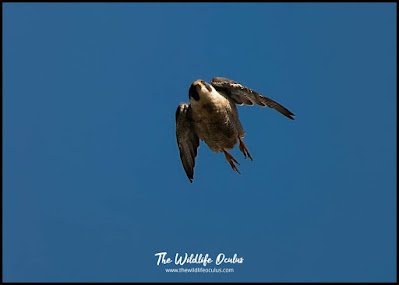 When the firebreak came into force it resulted in my trips up North being very curtailed and I have had to visit my local patches that are within walking distance.

I've enjoyed some walks in Pontypool Park which at this time of year looks fantastic with all the trees turning their amazing autumn colours.

There is a Buzzard that is often seen around the rugby stadium. It likes to do a bit of worming on the pitch. The last time I visited it was perched on the rugby posts.

The Afon Llwyd River was like a raging torrent on my last visit but there were Dippers to be found if you know where to look.

I had an opportunity to do some video recordings which I will post on YouTube when I get some time.

Now I am looking forward to the 9th of November when the firebreak ends. The local lockdown restrictions will be ending and I will finally be able to return to my favourite patch on the weekends - Goldcliff Lagoons.