Clucks and Seeps on the Gwent Levels

At this time of year the hedgerows on the Gwent Levels are alive with winter thrushes. Fieldfares and Redwings have migrated to the United Kingdom from Scandinavia and Northern Europe in their hoards.

These species of Thrush are also accompanied by less obvious migrants such as Blackbirds which also migrate South. These migrants are here to feast on the vast amount of berries that exist on offer from them. The Hawthorn hedgerows that are commonplace throughout Gwent host huge amounts of berries which these birds absolutely love to gorge themselves on.

The first thing I noticed on my return to Goldcliff last week was the  noises of clucking of Fieldfares and seeping of Redwings from the hedges. They are notoriously skittish species and difficult to get close to photograph. They seem to have a sixth sense for "Toggers" with cameras and will fly off when they see you from half a mile away.

Both Fieldfares and Redwings are beautiful birds. They have really distinctive plumage and lots of character. When I am fortunate to have a little luck and get close to them I can watch them for hours feeding. Fieldfares are particularly bullish and aggressive birds and are not slow to defend their patch of berries from rivals.

On Thursday morning when I visited Goldcliff with my good friend, Paul Joy, the fields and hedgerows all around Goldcliff were full of Fieldfares and Redwings. Every now and then they would nosily burst up into their air in alarm, especially when they saw us approaching them.

At dawn the weather was pretty awful , we were cursing the weather forecast as it was totally "not" what we were expecting. It was dark, windy ,wet and miserable but "wow" it was nice to be out and about. We were all wrapped up in our weatherproofs and despite being a little miserable over the poor weather I kept thinking of the saying “There's no such thing as bad weather, only unsuitable clothing”.

It was great to be out with a friend and in the fresh air with nature.

Monks Lagoon was pretty quiet. Not surprising really when there is a female Peregrine Falcon perched on the mini-island stuffing her belly full of some unfortunate "victim" for breakfast. I must admit the Peregrines at Goldcliff are efficient killing machines. They use the hunting technique of "goal hanging" mercilessly. They perch around on either Monks or Becs watching the "toing and frowing" of the lagoons residents. Then when the wildfowl seem to either forget the Falcons is there or lets their constant level of alertness slip the Peregrine is up in the air and bang, moments later some unlucky bird is being carried away for a good plucking before its ready for a Peregrines dinner!

When the light improved we discovered that most of Monks was deserted of anything exciting on the bird front.

Priors Lagoon had quite a few ducks. Shovelers, Wigeon,Tufted Ducks,Gadwall, Teal and Shelduck. The only waders present were six Black Tailed Godwits. No sign of the Ibis at all.

Just after dawn we had trudged through the muddy reserve and made it to the "wall". The rising sun was desperately trying to put in an appearance behind thick rain clouds. There was a very resolute fisherman who had cast his lines out into the incoming high tide waters of the Seven  hoping he would have some luck. Rather him than me, I took a couple of pictures but was getting soaked so headed off to find some cover.

Down at the Avocet Hide ( Seawall Hide) I met up with another good friend John Lawton ( aka Video John). It was the first time I have seen him since lockdown and it was good to catch up.

Becs Lagoon was home to more Wigeon, Mallards, Shelduck and Shovelers. There was a flock of Canada Geese and also the four Barnacle Geese that have been showing up in recent weeks at the reserve.

Eight Curlews arrived around high tide. Disappointingly none of them had colour rings.

The weather was a real mixed bag of gusty wind showers and clear spells. A brilliant Rainbow came out at one point which was a nice highlight.

To entertain us between the showers a pair of Stonechats perched up on the fences around the Avocet Hide.

One huge bit of activity that really stood out was the absolutely massive numbers of Woodpigeons flying in humungous flocks. Honestly I never new there were so many of them - they are moving throughout Gwent in legion! 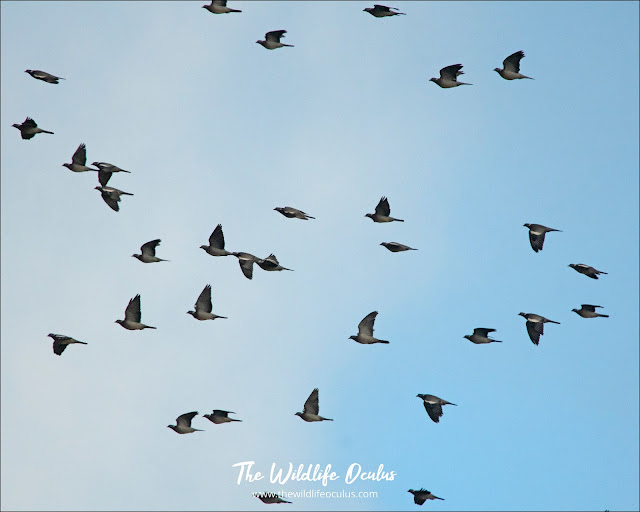 Paul and I eventually returned to the reserves entrance and from the rear of the first hide plotted up with our cameras and waited for the Fieldfares and Redwings to descend on the berry rich Hawthorn trees.

With some patience they eventually did and while were were at quite a distance not to disturb the thrushes we were fortunate to get some pictures and video of them feeding.

We then headed off from the reserve and I stopped off at Boat Lane for a quick scan for the salt marshes. Not far from my look out on the roadside I could see both Glossy Ibis preening themselves. Its wonderful that "Flossy" has found a younger friend.

The latter part of our day was spent at Saltmarsh Lane. We were hoping to watch the Starling murmuration over the reed beds.  As the sun began to set the Starlings began to gather but at a good distance away. The birds were perching up on Pylons that looked more towards the Nash end rather than where we were waiting. Eventually the Starlings started to flock in their thousands - probably somewhere in the region of 5000 birds. They were too distant for any good photographs. The flock descended practically as one and did not put on any kind of dazzling display this time. A Marsh Harrier flew in late on but by that time it was the only birds in the sky.

Nevertheless it had been a great day. I met up with a new friend, who I had first talked to up the Blorenge a while back and its was good to show him around Goldcliff -so I am giving "Nigel" a shout out in my blog - Welcome to Goldcliff :) 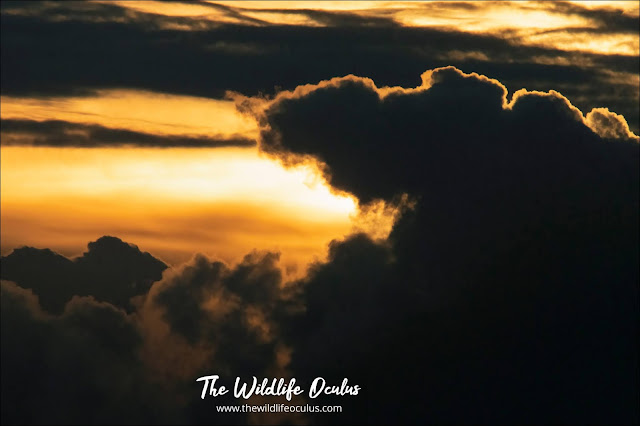