Great to be back at Slimbridge

This weekend I visited WWT Slimbridge with my friend Paul Joy. It's my first visit since the major lockdowns were introduced countrywide in December last year. Both Paul and I are members of WWT and now with all the restrictions gradually coming to an end it was about time we put our membership to could use.

Throughout the week I have been following the various "birding intelligence" feeds I monitor for the latest sightings in Gwent, particularly Goldcliff and the surrounding regions. At this time of year, things are getting very lively sightings-wise. Autumn passage is now well underway and migrating birds are starting to appear everywhere.

I have a keen interest in migrating wader species and am always listening out for news of some of the rarer birds being seen moving through places.

Last weekend at my local patch, Goldcliff Lagoons, it was good to see two Wood Sandpipers that have been using the reserve as a pit stop whilst on their migration route.

I also got involved in trying to help a photographer who had spotted an unusual wader in Blaenavon and was asking the Gwent Ornithological Society via their Twitter feed for some identification help. To be honest the request cause a little bit of debate amongst our local birding establishment as I thought initially it may be a Wood Sandpiper and was corrected by the "experts" that it was a Green Sandpiper. It ended up being another demonstration of how confusing it can be to identify Sandpipers if you are a little unfamiliar with them. The photographer had snapped a great picture of a Green Sandpiper as it turned out and it was a good spot considering where it was found.

Now that got me a little riled up as I could not remember ever taking a picture of a Green Sandpiper that was close enough to see any of the detail on it that would help with future identification.

So whilst monitoring my intel feeds one species of bird kept appearing in all the reports - Green Sandpipers and they were being observed at Slimbridge a great deal.

If there was ever any more incentive needed to encourage me to visit Slimbridge then this was it. I fancied a change of scenes in any case.

Paul and I arrived at Slimbridge just before it opened at 9.30 am. We almost did not make it due to some big road accident on the Prince of Wales Bridge. Fortunately, after a short wait on the motorway the jam cleared up and our birding plans were not ruined.

I would like to have visited a little earlier and used the side gate that members can use but Paul had enquired the day before our trip and been told this was no longer an option due to the Covid restrictions and WWT needing to monitor visitor numbers on site.

As soon as Slimbridge opened we headed for the Rushy Hide. It's the hide that looks out onto several shallow pools. In the winter season, this area is absolutely full of wintering geese, swans, ducks, and waders. In the summer it tends to be a little quieter but during autumn passage you really need to keep your eye out for the rarer species. I always find it to be a hide that affords good opportunities for closer views of waders.

On our visit, first thing in the morning it was home to a flock of Black-tailed Godwits, a couple of Avocet, a family of Shelducks with two "Goslings", and hiding amongst the legs of the Godwits a lovely looking Common Sandpiper.

Moving on we visited the Robbie Garnet Hide next. Now, this was really good. As soon as I looked out through the windows two Green Sandpipers dropped in from the sky and landed on the mud in front of me - just brilliant stuff!

Within an hour of my visit, the bird species I was aiming for had been ticked off my list. Paul and I had the hide to ourselves. In terms of birders, it was very quiet. Nice, I like it when there are few people about. It means as long as we were quiet there was less chance of causing a disturbance from noisy people and more opportunities for the waders to come in close to us.

I scanned the other waders and noticed that there were Redshanks and Black Tailed Godwits. Suddenly one of the Redshanks started to chase aggressively another strange-looking Redshank. I looked closer and realized that the target of the other bird's aggression was a Spotted Redshank. Another brilliant find. The Spotted was showing well. There was some of its summer plumage showing but not a great deal.

We checked out the Stephen Kirk hide and saw even more Green Sandpipers. They seemed to be everywhere. They were best viewed though from the Robbie Garnet Hide so we returned there and ate our breakfast whilst watching several Green Sandpipers feeding on the mud in front of us.

Throughout the morning we hardly saw a soul and were wondering where everybody else was. That mystery would soon reveal itself when we decided to check out the South Lake and walk into the main reserve proper.

As we traversed the reserve we found lots of people everywhere. The summer holiday season is upon u and many families visit Slimbridge for a day out. I used to bring my own children many years ago and understand the attraction for families and it's also a good way of introducing children to birds as they can feed them and see many different species close up.

The South Lake was quite busy. There was a nice flock of Black Tailed Godwits, Lapwings, and a couple of Ruffs. My highlight was a pair of Common Terns. One of them was roosting up in what looked like some form of purpose-built Tern island.

The next stop was a visit to a new bird aviary that has been constructed. Some of my readers may be aware already of the small enclosure that is near the Andean Flamingoes that was home to injured waders such as Avocets. The new Aviary is like a super big version of this which I must admit is pretty amazing. The aviary allows you to see waders like Avocets, Redshanks, Ruff, and even Ringed Plovers closer than you probably ever could out in the wild unless you were really fortunate.

There is more than just waders on show. We explored it further and found it contained Little Egrets and Spoonbills. We spent quite some time in the aviary and enjoyed seeing the birds at close quarters.

Whilst watching the Spoonbills I thought I was seeing things when a Dalmation Pelican flew past my line of sight. Naturally, I could not help myself and follow after where it had flown. I then discovered that at the rear of the aviary is now a live demonstration arena where WWT bird trainers do live shows with some rather unusual birds.

The pelican was the star attraction of one of the shows and the trainers were doing their best to keep it in the arena as it was flying about and being a little disobedient. In the end, it flew into the arena and gave a good show to all the spectators.

Paul and I returned a couple of hours later and watched a second show. This time the star attraction was the beautiful female African Crowned Crane. She really is a beautiful bird. The crane walked in and jumped up onto a purpose-built perch and then flew onto the stage. A really stunning big bird and great to photograph. My memory has failed me but I am sure her name started with Z. 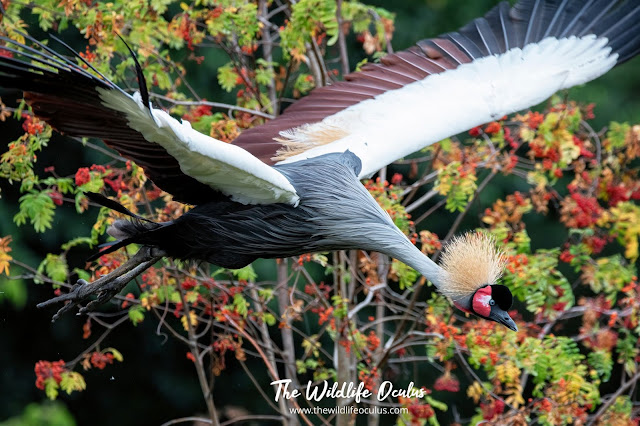 I really enjoyed the show and found it to be very informative. Along with the aviary, another great attraction that has been added to Slimbridge and I am sure they will entice more people to visit and ensure in turn that funds are generated for the WWT for conservation.

We finished off our visit with one final hour right back to where we started - The Rushy Hide.

Almost within minutes of our return, I spotted a Green Sandpiper and before we knew it two more turned up and joined it. We had great views in the afternoon sunshine. The Spotted Redshank put in an appearance again and dropped into one of the pools with a flourish and then started to preen itself. A Common Sandpiper again showed well and started feeding very close to the hide. 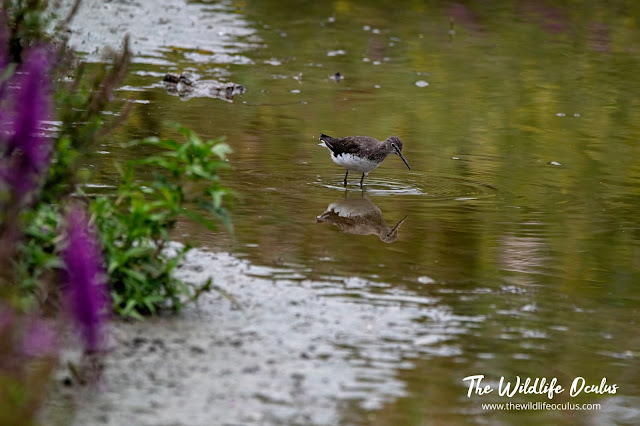 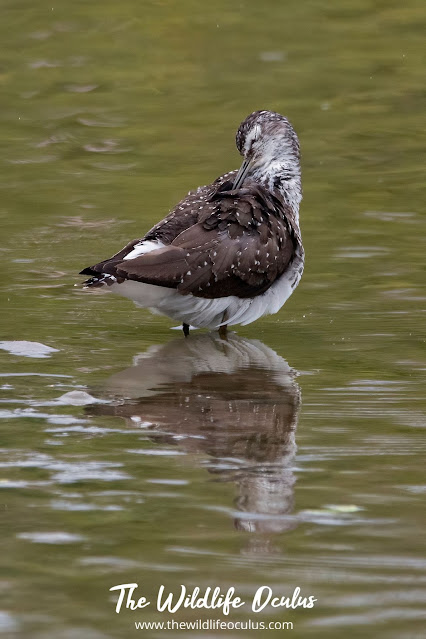 By the end of our visit, Paul was full of banter and I giving me lots of digs about my obsession with the Green Sandpipers - " Blair, I really don't think you have taken enough pictures of Green Sandpipers" he said sarcastically with a smile. Well, I always think you should make hay when the sun shines and I think I made the most of my opportunities with the camera during the visit.

We left the reserve with quite a list of bird species seen and lots of great photographs. Another great trip to WWT Slimbridge.

The Oculus Factfile on Green Sandpipers 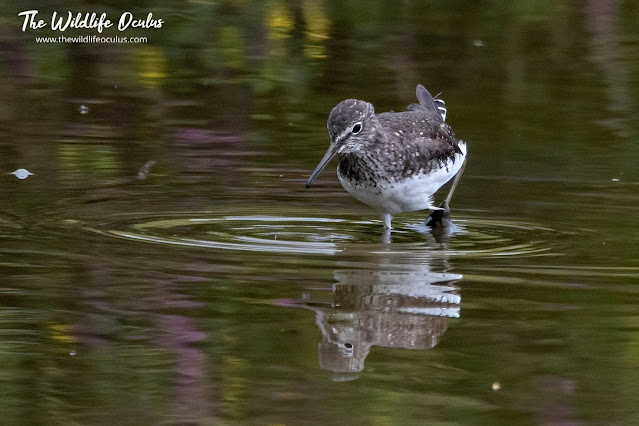