Today marked my return to my favorite reserve after a few weeks away visiting some other popular birding venues.

It's always good to be back on the patch and despite the miserable forecast I somehow managed to drag myself out of bed long before dawn to travel down to the reserve.

The sky was thick with dark clouds as I departed except a parting in the greyness towards the eastern horizon - just where the sun was due to rise.

As I parked the car up at the reserve the sun was just starting to rise up between that gap in the clouds. Amazingly as I walked into the reserve and watched the sunrise from the back of the Curlew Hide the blazing sun appeared to burn away large swathes of the gathered rain clouds until incredibly there was some blue sky above the lagoons. 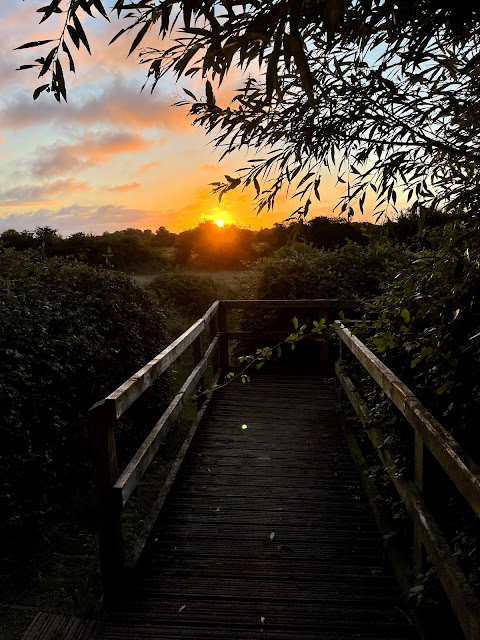 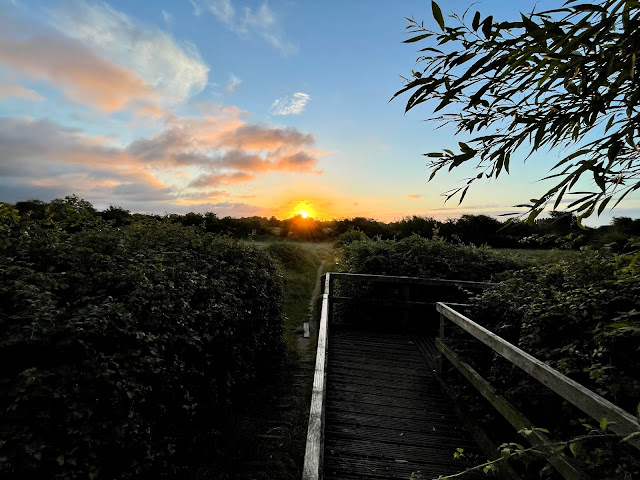 Sunrises always give me a boost and make me feel energized and it was just what I needed at 5.45 am in the morning.

I checked out the Curlew Hide ( aka Hide 1) to see what was around. The water on Monks remains very low and there is a lot of exposed mud. Out at the far back of the lagoon roosting behind the island were thirty Curlews, a solitary Whimbrel, and five Black Tailed Godwits.

As soon as the morning's sun starting lightening everything up they all called out and flew off heading towards Goldcliff Point.

I moved on to the Redshank Platform and took a look at a small flock of Black Headed Gulls. I could see a flock of waders but they were keeping out of the wind in the far left corner of the lagoon where I could not get a good view of them.

I soon had some company. Dan Webb walked up onto the Platform with me and it was great to have a chat and have his legendary sharp eyes scanning the skies and to have his knowledgeable birding insights.

We moved on to the Sea Wall as there was not a great deal showing despite the tide being well on its way in. 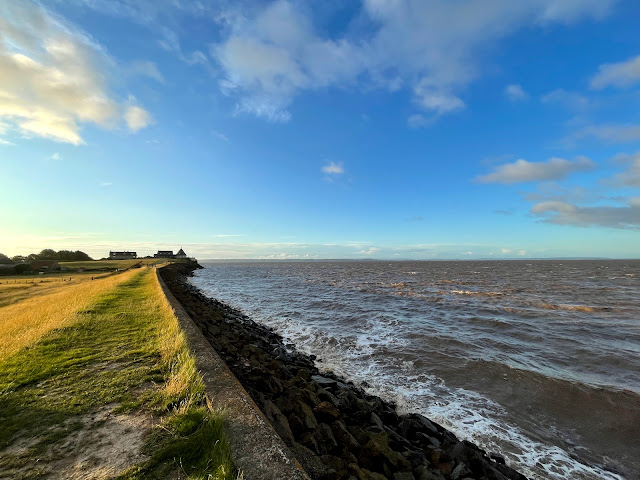 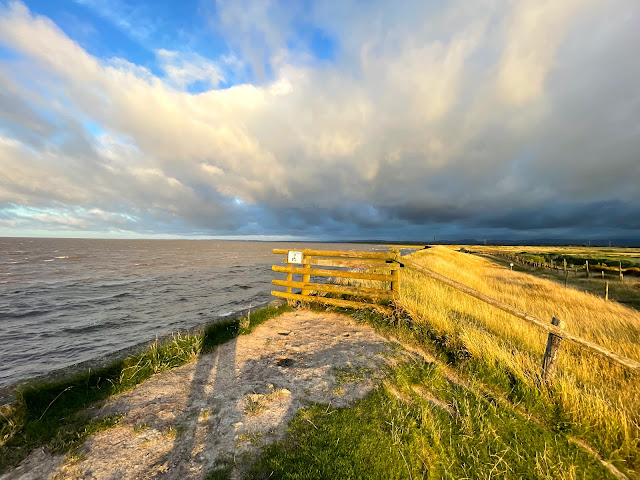 Dan and I spent some time stood on the sea wall scanning the waves for the rarer seabirds. Unfortunately, we did not have any luck seeing a Storm Petrel, Shearwater, or a Gannet ( not whilst I was with him in any case). We did see many Gulls passing coming over the point and sweeping low above the waves towards the Pill and beyond. A small flock of Dunlins and Ringed Plovers hurtled off Becs Lagoon and flew over the wall and out into the estuary. A highlight was seeing two Turnstones fly past us low above the sea.

Dan picked out overhead migrating (vismig) Yellow Wagtails and a small flock of Black Tailed Godwits.
Priors Lagoon had a floating armada of Mute Swans. This year I have never seen so many swans at Goldcliff. Later Dan would spot the two Garganey that has been seen in the last couple of days on Priors.
Looking across at Becs Lagoon I was amazed at the absence of water. Only on the far side of it has water now and it was there that a large flock of around one hundred Black Headed Gulls had gathered.
There were some small waders mixed in with them and some Mallward and Garganey ducks. The flock of gulls and ducks did not remain for long as something spooked them and caused them all to make a sharp exit from the reserve and head out onto the estuary.
Dan and I headed down to the Avocet Hide ( Hide 3 aka Seawall Hide) for a closer scan of the lagoon.
Suddenly a falcon swept quickly across the dried mud of the lagoon towards Monks before turning back around and hurtling around the back of the hide.
Becs lagoon was now cleared of any significant birdlife. It was time to move on and check out Monks Lagoon again to see if any waders had dropped in there for high tide.
As I walked around the reserve I spoke to two friendly birders who told me that they had just seen a lovely Spotted Redshank in breeding plumage on Monks feeding opposite the Greenshan hide.
Hastily I marched to the Greenshank hide and I was really pleased to see the Spotted Redshank feeding very happily in among a flock of Black Headed Gulls.

Considering that the Lagoons were relatively quiet this was a welcome arrival to the reserve.
I was fortunate to watch it in good light and made the most of recording some video footage of it feeding. The Nikon P1000 camera I use as a scope and for video really comes into its own in these cicumstances.
The Spotted Redshank is no doubt on its autumn passage. Spotted's breed in Northern Scandanavia and other Arctic regions in the far North of Europe. In summer they have fabulous Black breeding plumage, a white eye-ring, and white spots on their wing feathers. They look spectacular compared to a Redshank.
I believe this bird was using the lagoons as a "pit stop" where it will fuel up for a few days, feeding on the energy-rich invertebrates that inhabit the brackish waters of the reserve.
Then when it has had a rest and feels refreshed enough the Spotted will;l continue its migration South. Many of these birds travel as far as West Africa where they will winter before returning next spring.
Another example of an amazing journey that waders do every year and I think it's great that we are honored to have its presence for a short time at Goldcliff Lagoons.
I had a nice catch-up with some fellow birders who pointed out to me two Yellow Wagtails that were on the far shore of Monks Lagoon. These very brightly colored birds were far outnumbered by their cousins the Pied Wagtails which were numerous throughout the reserve.
It was time for me to make a move and as I did so I received a message from one of my friends. He had visited Abergavenny and seen one of my landscape pictures on display in the Shakletons Photography shop window. I recently won first prize in the Gwent Wildlife Trust Hill Life Though a lens competition with a picture I took in January after walking up the Pontypool Folly in the Snow. There is a blog post on that if anyone is interested here. I am not the only one to claim some fame concerning that competition as my friend Paul Joy also won the first prize for the mobile phone picture category with his excellent picture taken up the Blorenge.