My mobiles alarm clock woke me with quite a shock at 4.45 am on Good Friday morning. The proceeding evening had been a busy one. I delivered a presentation about the Birds of Goldcliff, that evening to the Swansea local group of the Wildlife Trust via zoom that also got live-streamed on YouTube ( a first for me). It was well received and I enjoyed spreading the love of Goldcliff to an audience of fellow birdwatchers.

So, I pulled myself together got my kit loaded up in the car and headed for my first destination of the day - Goldcliff Seawall for sunrise.

When I eventually arrived at the wall there was quite a mist forming over the wall and the estuary. The skies' atmosphere seemed to keep changing constantly. One minute there would be clear patches in the sky and then the next it would be cloudy. The eastern horizon was already starting to turn orange signalling the arrival of the sun and the start of a new day.

I quickly marched along the wall and got into position and set my camera equipment up. I had brought the drone again with me and soon had it on its little landing pad ready for launch. The weather conditions despite the mist were really good.

Just before dawn, I put the drone up. The sun was about to burn itself through the layer of mist and cloud on the horizon and put an appearance in. On some of my previous visits, I have been a little unlucky when the weather has been cloudy and the sunrise has been spoilt. That wasn't going to be the case today.

The sun rose up behind the Prince of Wales bridge and burnt through the mist on the horizon. It was great to capture a picture of a jogger on his early morning run. The sun rose up underneath the cloud layer which made the sky look very cool.

The early morning sunlight was now illuminating the whole of the wetlands so I turned the drone around and took some wide-angle pictures of the wider Goldcliff area. I think the clouds above Goldcliff Lagoons looked very dramatic.

As the sunrise ever higher it was now time for me to move on. The next stop was going to be Godlcliff Lagoons. I was hoping for plenty of waders as it was high tide.

By the time I had driven a short journey down the road and arrived at the reserve the sky had already changed and was starting to clear into a lovely blue sky - what a changeable day it was.

I started my morning birding with the company of two of my birding friends. Unfortunately for us, a large flock of Black Tailed Godwits had departed Monks Lagoon shortly before our arrival but we instead had good views of a solitary Spoonbill and a Spotted Redshank. Not a bad start at all.

I enjoyed the sunshine and a catch up with my friends. We chatted for a few hours on the Redshank Platform and probably the highlight at that time was seeing a male Marsh Harrier quarter the lagoons and then two Spoonbills flew over the platform, probably having been startled by the raptor.

It was going to be a funny old morning concerning Spoonbills. As we started off seeing just one, then it was two and finally, by the end of the visit, we saw an incredible five birds in total! 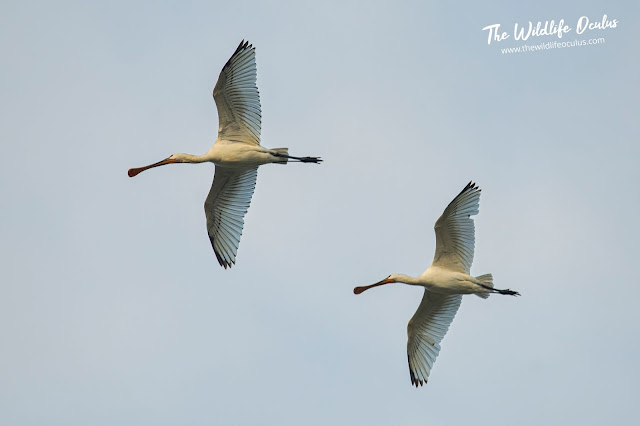 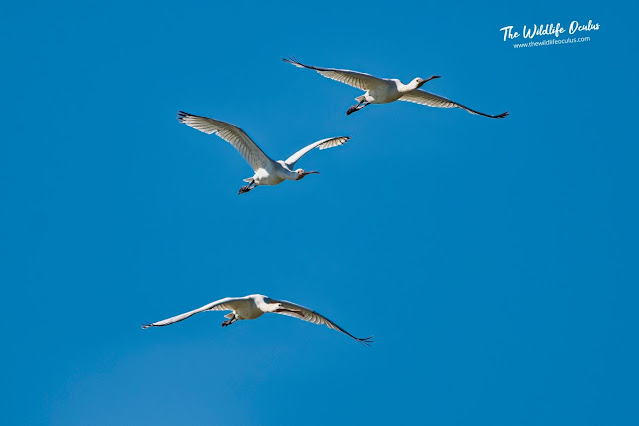