At stupid o'clock on Saturday morning, I was hastily running along the Pwll Du mountain track heading towards Gilwen Hill. I was hoping that there was going to be a cloud inversion and that I would find valleys that sit between the Blorenge, Skirrid, Sugarloaf and Gilwern Hill full of the mystical "Dragons Breath".

What I was seeing was a completely different matter - in a way! Instead of the "Dragons Breath" mist being in the valley it was all over the mountain top of the Blorenge and Pwll Du. I was running through a peas soup mist en route to my planned spot to capture the sunrise. The atmospherics were incredible.

Looking upwards to the heavens the sky was a dark blue streaked with purple and there was a full moon ( known at this time of year as the Pink Moon). The sky was lit up orange to the east but at ground level, the whole mountain was swirling with fog. One minute it was too thick to see further than them meters in front of you and then the next it would clear up and reveal the track ahead and a very inviting vista on the horizon.

Eventually, I reached my spot on Gilwern Hill and looked across the Abergavenny and Crickhowell Valley.

The whole lower valley had a long white band of mist leading up the slopes of the Sugarloaf and the Skirrid. Spilling over the Blorenge and Pwll Du into the valley below was the hill fog, like waterfalls of mist.

It was touch and go as to whether I put my drone up. The wind was light but I had to keep an eye on the mist that was pouring in over the top of the hill.

I flew it carefully over the valley where there were clear skies.

As dawn neared the sky began to turn mixtures of orange, blue and pink with a veil of mist spilling in from all directions. The valley floors were covered in a shroud of white. The whole scene was also alive with bird songs as the dawn chorus was in full swing and the music of life was booming out of the nearby woods.

I was eagerly awaiting the sun to now arrive as the mist was rolling in thick and fast I feared I was would end up with a total white-out and no view at all. I kept the drone hovering in clear air in readiness.

Then up it came bursting a fiery orange above the low clouds and dawn broke.

I must admit it was one of the most dynamic sunrises I have witnessed in a long time. Every time I looked the scene was changing. Within minutes the dragon's breath swept in and almost obscured the sun from view.

An amazing sight to behold but it was now getting "wet". Dew was forming on all my kit and it was time to land the drone and pack it away somewhere dry.

I decided to head back to the car as I had another photography mission planned later in the morning.

As I walked the track carrying all my kit, I am sure I caught sight of a Ring Ouzel on a steep slope above the Woods near the Pwll Du quarries. It was gone before I could get my big lens on it.

I heard a bird calling in a Hawthorn tree and when I looked was glad to see a Meadow Pipit putting in an appearance. 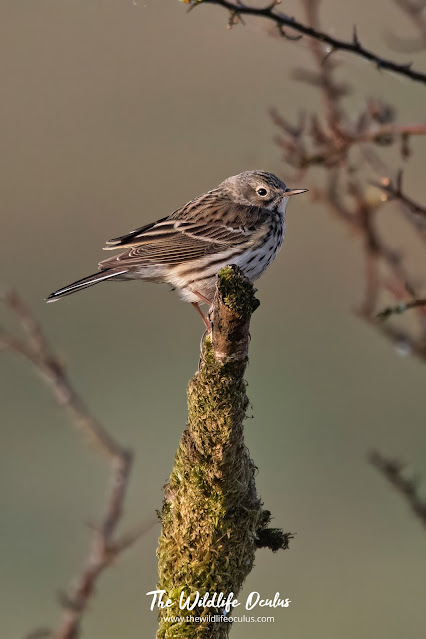 Meadow Pipit(Misidentification by me originally thinking it was a Tree Pipit -Thanks to my expert bird id, reader Paul Seligman for the correction).

By the time I had reached the car, the mist had lifted from the mountain top. A Skylark took to the sky and greeted me with a mighty serenade. There is nothing quite like the song of a Skylark to give me that summery feeling.

The bird then dropped like a stone and landed on a small hillock and posed for a picture.

Later that morning I would return to Pwll Du and meet up with friend Paul.

The Dragons Breath was now starting to burn off but it remained around the slopes of the Skirrid and the Sugarloaf. 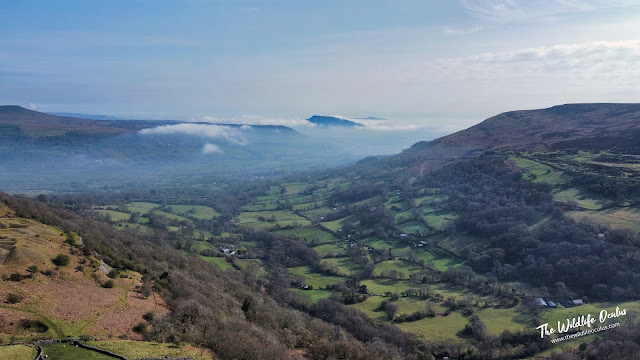 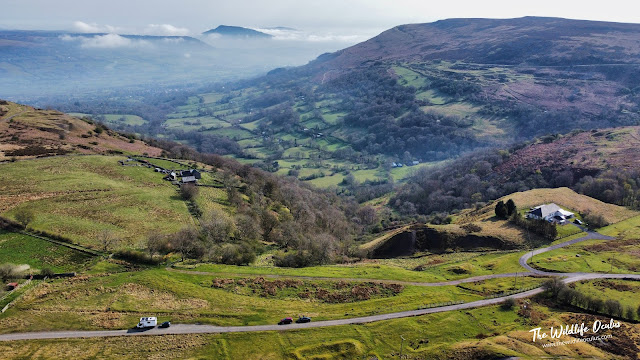