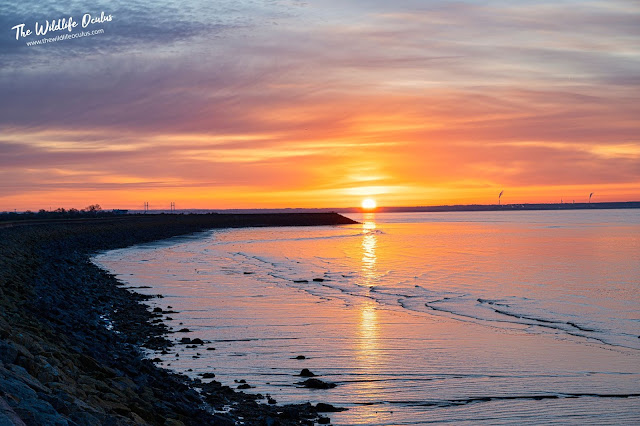 After a very busy week that has left me mentally exhausted, I really felt in need of some birding therapy this weekend.

Earlier this week somebody asked me why do I like going to Goldcliff Lagoons. This is a good question that has lots of possible answers. The obvious answers are, for the birds and the photography. Thinking on it, however, there is a lot more to it than that and perhaps one of my main reasons for visiting is that it makes me feel good.

It's where I go when I need to get my mojo back, give myself a boost and lift my spirits. There is so much to love about the place.

This morning Goldcliff really did have the Feel-Good Factor and I am just going to describe it to those reading so you get the idea why I am so passionate about the reserve.

I woke before dawn feeling not the best and almost threw the towel in before leaving the house. The thought of letting down my friend Paul who I had planned to pick up en route to Goldcliff however made me determined to sort myself out and get out of the door.

De-icing the car screen soon perked me up a little and after a short drive, I was at Pauls's and greeted by his big smile.

I looked to the east as I waited for Paul to sort himself out and fill the boot up with his camera kit, and noticed that the sky was starting to turn orange. Whilst it was a little cloudy that was a good sign as it was odds on we would get a good sunrise at Goldcliff.

Impatiently I rushed Paul along and soon we were off to Goldcliff with some haste as the clock was now ticking - dawn would soon be upon us.

As we meandered along the road through Goldcliff I could feel the excitement building and any bad feelings I had were suddenly disappearing.

Before we knew it we were hastily grabbing our camera kit from the car and running up the steps of the Goldcliff sea wall.

As we reached the top of the steps and looked out onto the estuary we had a sight for sore eyes to behold. The whole estuary was glowing orange. The tide was on its way in and the waters were glowing orange as they caught the light shining down from the sky which looked like it was on fire. 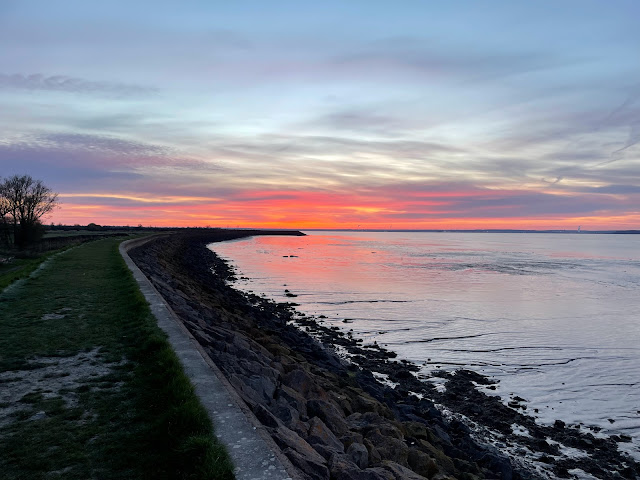 It was ten minutes before sunrise. Frantically we set up our cameras and I also got my drone ready.

Then the sun rose into the sky like an orange fireball and everything got bathed in golden light. I just love watching a sunrise, it's like god has hit the reboot button and the new day just makes me feel so revitalised.

I must admit it was pretty spectacular this morning and was fabulous to photograph. 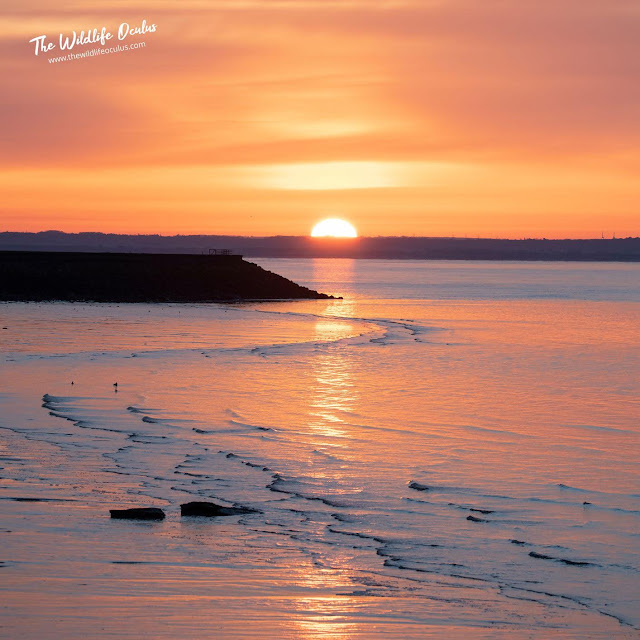 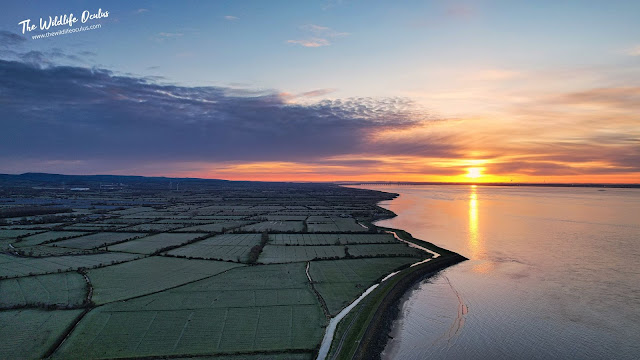 The drone went up a few minutes after sunrise and I spent some time getting a birds-eye view of the surrounding area and Goldcliff Lagoons from a distance. The light was wonderful. 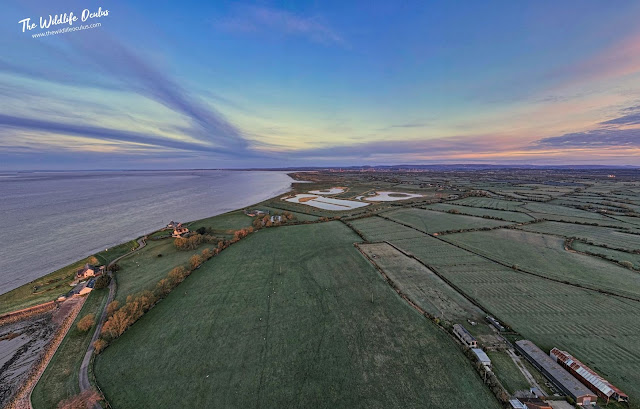 That was my first boost of Feel Good Factor of the day and it was time to move on for another boost- this time a birding one.

Paul and I met our friends Rushy and Sarah on the reserve. Both had happy smiley faces - glad to be out for their weekly dose of birding.

A major ingredient of the Feel Good Factor at Goldcliff Lagoons is the people you meet. I've met many good friends there and always enjoy catching up with them and having great conversations, sharing a joke or two and being with people who have similar passions to me. Whilst we all come from different backgrounds we usually have two things in common, a love of birds and Goldcliff. 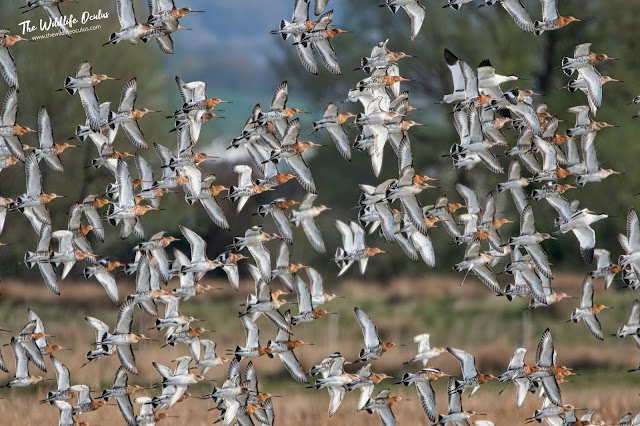 We all ended up in the sea wall hide watching a massive flock of 500+ Black Tailed Godwits having a laugh and joke waiting for the birds to take flight and slowly freezing ourselves ( the seawall hide is also known as the "Freezer" as its almost always bitterly cold until the heights of the summer).

Then another ingredient of the Feel Good Factor put in an appearance. Something disturbed the wader flock and up they went exploding into the air and we all got treated to a fantastic aerobatic display for a few minutes.

After an hour or two, it was time to defrost and we all went for a stroll in the sunshine and stand on the seawall and get our daily dosage of vitamin D.

The sea wall always provides a great view and is probably one of my favourite places on the reserve to just stand and stare and relax watching the world go by.

There were lots of happy people and I took the opportunity to take one of my Goldcliff Wall of Fame pics to celebrate just being out in the fresh air and feeling good.

As we left the wall I thought I heard someone call my name from the nearby field but instead all I saw were six lambs calling "Blairrrr" :)

I walked over to them and was really surprised to find that they didn't run away but instead trotted up to me for a pat and a smooth. 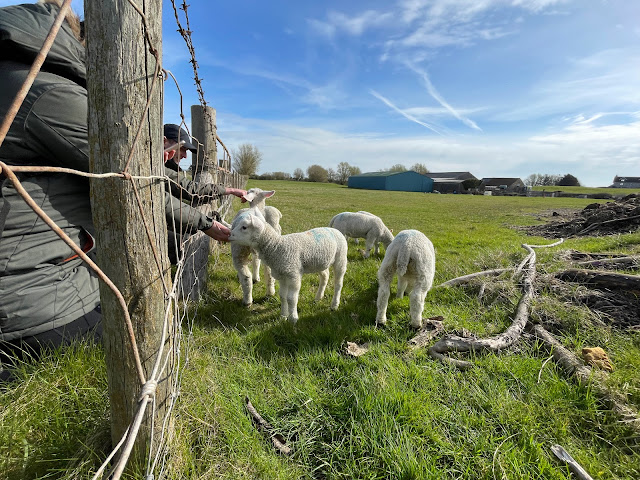 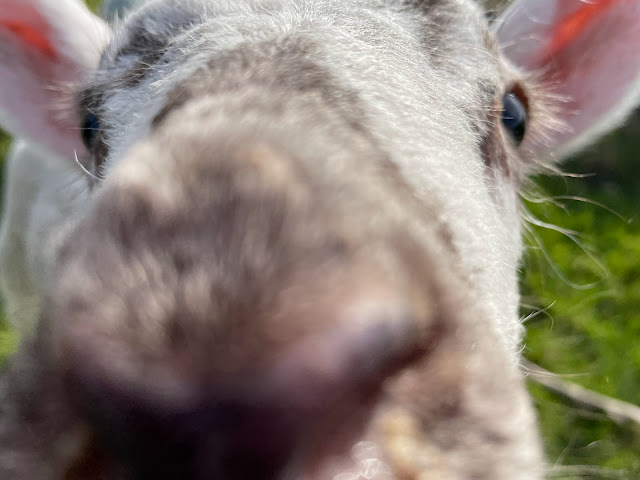 All of us got greeted the same by the lambs which I must admit we're a major Feel Good Factor in their own right.

So there you go that's Goldcliff Lagoons for you and there's your answer.

I go there because it makes me feel good :)