A cold and blustery morning birding in the Vale 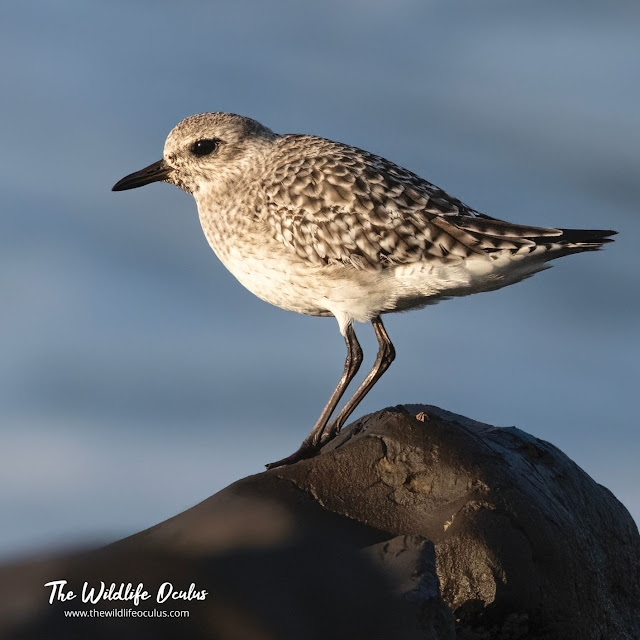 This weekend I headed to the Vale of Glamorgan and visited a couple of my favourite birding spots with my friend Paul Joy.

The weather forecast predicted a very cold start with bright spells and looked quite promising for a sunrise. For the most part this was fairly true at stupid o'clock before dawn. The skies were clear , the stars were twinkling and the waning Moon was very bright with no clouds.

However as we travelled west along the M4 motorway the clouds got thicker and thicker and when we arrived at our first stop - Newton Point, Trecco Bay, Porthcawl and watched a big black cloud  making its way easterly across the sky and it totally wiped out any chance of seeing a nice sunrise.

The wind was very cold and quite blustery so we both had to really wrap up to stay warm. As the morning progressed - the cold air really got into my throat - more on that later :(

It was high tide as we scanned the rocks for birds in the pre-dawn gloom. Our eyes were streaming as we peered into the wind hoping to see some Purple Sandpipers. We drew a blank at Newton Pont and decided to walk along the shingle on Trecco and scan the usual places for roosting waders.

Eventually we spotted some Dunlins , Sanderlings and Turnstones that had settled on the waters edges. Unfortunately as soon as we had clocked the waders a dog walker turned up with two dogs off the lead that ran straight through the waders unsettling most of the flock that flew off across the bay.

Luckily quite a few birds remained after the dog walker had left the area so we could settle down and watch them from a respectful distance.

A small flock of Oystercatchers were perched up on some rocks and scanning carefully the shingle and surrounding rocks Turnstones, Sanderlings, Dunlins and Ringed Plover. They were also joined by a couple of roosting Herring Gulls.

The tide began to slowly go out and the waders began to retreat with it. The beach was starting to reveal itself with the receding waters and we were hoping for the Sanderlings to start feeding on the beach. This was  not going to be as there were too many people with dogs running amok ( I must admit dog walkers are driving me slowly mad on beaches).

I sat down on a rock to scan the beach and then something grey coloured caught my eye moving against the dark black rocks. A small flock of Grey Plovers were scuttling along the outcrop of rocks towards the shoreline.

Paul had also seen them and together we tried to advance towards them without scaring them. Grey Plover really have got a low tolerance of people and there safety zone- the distance they keep between people and them is quite large compared to some of the other waders we watch.

Gradually we inched up closer to them. Occasionally they would get skittish and fly a little further on . Sometimes I would curse and think it was one of us that had messed up- only to discover a dog had suddenly bounded up and had caused the disturbance. I was really disappointed with the lack of apologies from dog owners who could clearly see us carrying lots of camera equipment and dressed up like snipers. I hate generalising - but for the most part dogs are almost always off the lead and not under close control whilst on the beach.

Despite the interruptions we made the best of it and eventually the plovers settled again. We sat up and watched the birds from a discreet distance and enjoyed taking some photographs of them.

The Grey Plovers are really quite beautiful waders. Their plumage is lovely and they have very large eyes.

Grey Plovers winter on the coastlines of the United Kingdom but they breed in the Arctic so they are only really seen regularly during the winter months.

The Grey Plover we were watching were quite accommodating in the end and I think that was because Paul and I just settled down and respected the birds keeping our distance. We put our telescopic lenses to good use. I recorded quite a bit of video that I will post again at a later date.

We were also blessed with a break in the clouds for a short time and the plovers were bathed in some nice golden early morning sunshine.

Looking across the channel from where I was perched on the rocks I could see  snow on what I think was the Quantock Hills. This did not surprise me in the slightest as the wind blowing into our faces was getting colder and colder and was now biting through all my winter clothing.

Beaten by the chilly wind Paul and I headed into Porthcawl for a bite to eat and a warm cup of coffee.

Whilst sitting in the cafe we were entertained by a helicopter from the coastguard that appeared to be doing some sort of training exercise.

Our next stop for some birdwatching was a spot located along the River Ogmore Estuary.

In a matter of an hour we had all kinds of weather. Rain, sleet and hail did its best to dampen our birding spirits but we persisted on. It was good to bump into one of our birding pals known on my blog as "Welshy Paul" ( I know so may Pauls they all have to be given nicknames :) ). Welshy is a top birder and I usually enjoy his company at Goldcliff. He has keen eyes and rarely misses spotting a rarity or two.

Welshy pointed out a flock of 12 Goldeneyes and a couple of Mediterranean Gulls. We also found a Dark Bellied Brent Goose mixed in with the many Canada Geese.

This particular place is a really nice place to visit and do some birdwatching. I was really happy to see the Goldeneyes. They are not a species I have often seen outside WWT Slimbridge.

The wildlife of the Ogmore Estuary also has to contend with people doing various activities, from dog walkers, birders, runners, cyclists and horse riders. The latter did not disturb the Canada Geese and the Brent Goose really at all.

That prompted us to pack up and head home. All in all we enjoyed a nice morning of birdwatching and were fairly pleased with what we had seen.

I mentioned earlier that had started to develop a cough. Well yesterday evening that just got worse - as did the weather. This morning I woke up to a snow covered street and not feeling too good. The cough just would not go away and so I took a covid test - and most disappointingly I have tested positive!

So now I am holed up coughing and spluttering in my bedroom self isolating writing this blog. Hopefully be feeling better soon for Christmas.