Its been a little quiet at the hide on my most recent visits, weather has been poor and I have not had a great deal of time to spend at it either.

So I've been doing some research about my current bird obsession.
Kingfishers have a hard life and a relatively short life span. Many do not survive there first year and beyond that as Adults they tend to last only a couple of years.

They need to eat approximately 65% of their own body weight each day to survive. That is a lot of fish and invertebrates. They require clean water which is clear to see the fish. They have amazing specialized eyes which work well under water. They have a third eye lid which helps them when they dive.

When the water is dirty or rough they suffer as they struggle to see fish. They suffer when there are periods of high water levels. Cold also is a challenge for them and harsh winters there populations can suffer. Mink predation and disturbance is also a problem.

To try and combat the challenges they face they can have up to three broods a year with up to 6 chicks.

Not all Kingfishers when they fledge learn to fish quickly and it has been reported that they can starve to death even before winter.

Through my own observations I have four different Kingfishers visiting. An Adult Male and Female and two male and female juveniles.

I've been fortunate to watch both the juveniles catch fish. Considering that 25% of Juvenile Kingfishers don't make it to Adulthood I am heartened that they are able to catch fish and I hope they make it through.

After learning these facts I respect the birds even more and feel lucky I have been able to get so close.

The photograph is of a male Juvenile . The white tip is indicative of a juvenile. Apparently some think it may help Adults see it in the dark of the nest burrow. The feet are a darkish red in juveniles for up to six weeks. They then turn a bright orange in Adulthood.

At the moment the Adults are tolerating this youngster in their territory but I would expect him to be driven off soon before the winter. 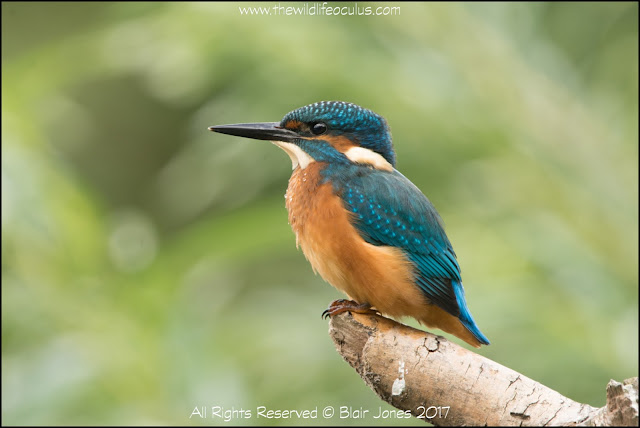