By Godwit what a great days birdwatching to be had.

This weekend has been amazing for bird watching at Goldcliff Lagoons. Some may say, "well your always talking about how much you have seen at the reserve" but really it has been special.

There has been a conjunction this weekend of high spring tides and some warmer weather. Earlier in the week the first spring migrants were arriving. Sand Martins and Wheatears were seen at Goldcliff and other areas of the Newport Wetlands. The dawn chorus has started to really come alive and every morning this weekend  I have been serenaded by the songs of birds making their presence known at "stupid o'clock". Spring is now here and every where you turn nature is exploding into life.

The UK is soon to be a major destination for a host of migratory bird species that come to breed. Whilst these summer migrants are incoming to our shores from  the African continent we will also have a lot of outgoing traffic. The winter migrants  that have been gracing the Severn Estuary are preparing to depart to their summer breeding grounds (some have left already). Its a busy time if your feathered - bursting with energy and life.  A number of our Welsh wader species are gathering this month to travel together for pastures new.

On Saturday I was accompanied by my friends Paul and Nev. We set up on the Lapwing platform and gazed at quite a big flock of Black Tailed Godwits. I only commented less than a week ago about how I had compared my sightings this time last year and I thought that the Godwits were lacking in numbers and not showing as much. Well, that was all going to change.

Anyone who knows me photography wise knows I like my flight shots of waders. I think birds are at the best when photographed doing the one really cool thing they do - flying.

So when I saw that there was now a rather big flock of beautiful looking Godwits and also a flock of about thirty Knots that all were a little nervy and had a tendency to fly quite regularly I was in my element. Things were looking promising already and it was only 6 am, the moon was still out and dawn was on the horizon.

As the sun rose and the light got better the Black Tailed Godwits were revealed in all their glory. They are moulting now and their heads, neck and breasts are turning a wonderful deep chestnut-red colour. These fabulous looking  waders are preparing for migration. I suspect a large number of them will soon be making the journey to Iceland in order to breed. 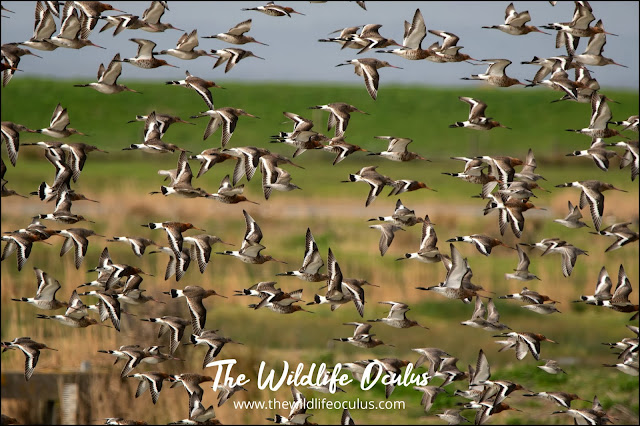 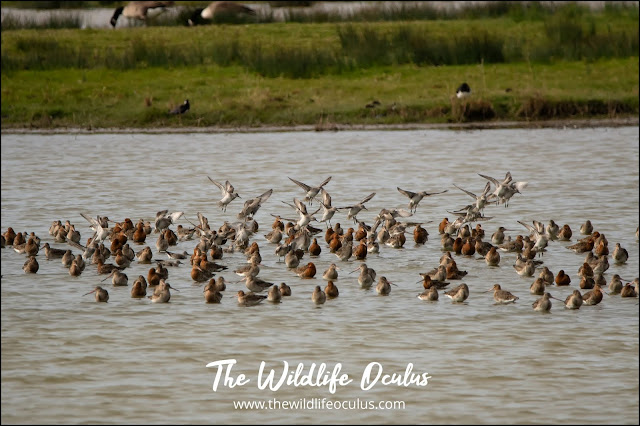 The Knots were a real bonus as I have not seen them in these numbers at Goldcliff before. Their plumage in comparison to the Godwits is plain grey and white. However this is their non-breeding winter colours. Their international name is Red Knot and that because their summer breeding plumage turns red. The Knots have got even further to travel than the Godwits. They will stay in the UK until May at the latest. They also will fly to Iceland but only for a stop over as Knots travel great distances and will progress further to Arctic Canada. Truly remarkable to think these birds have been wintering around the shores of the Severn Estuary. 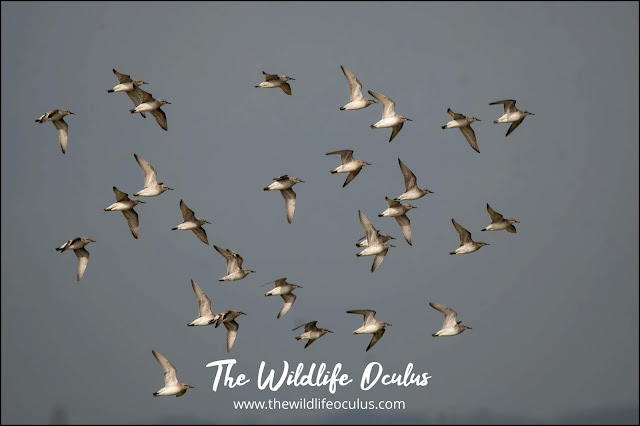 Nev and I kind of became rooted to the spot as there was a lot of bird activity to watch. Avocets are now spread about the reserve in good numbers. Both Ringed and Little Ringed Plovers were present on Monks Island ( Lagoon 1), Dunlins fed at the edges of the water, Oystercatchers were pairing up and Lapwings were causing all kinds of commotion fighting with each other, displaying to females or mobbing Carrion Crows who were the main trouble makers.

Suddenly out of no where the sky was full of incoming Black Tailed Godwits. This was a new flock that I think had been pushed in by the spring tide flooding the salt marshes. It was awesome. Thrilling to watch all these waders fill the sky. My camera triggered into action and sounded like a Gatling Machine gun as it rapidly chewed up my memory cards space as I took hundreds of pics. 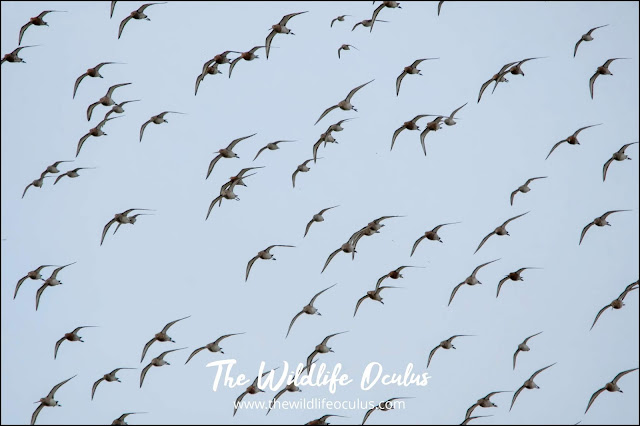 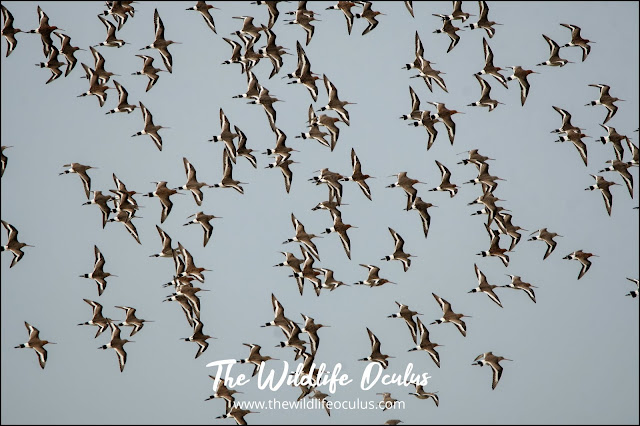 If anyone wonders my setup of choice is a Nikon D500 Camera with a Sigma 150-600 mm. It shoots at 9 fps with 0 buffer. Just what you need for birds in flight.

The swirling mass of Godwits descended from the heavens and spread out all over Monks ( Lagoon 1). There was over three hundred birds easily. 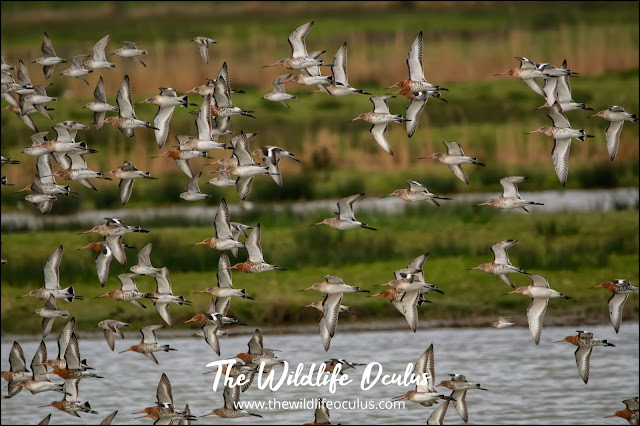 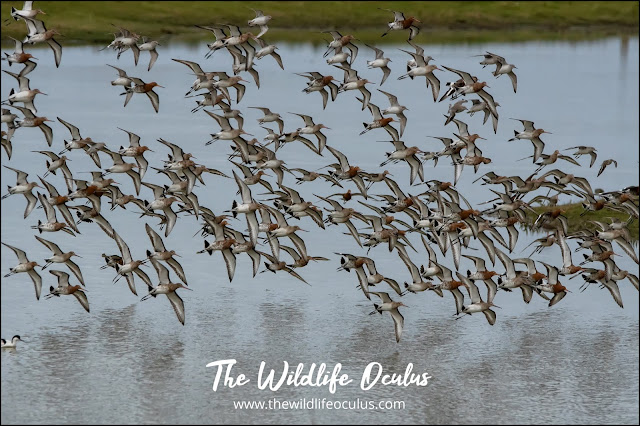 The Godwits and Knots kept me occupied for the best part of the morning as they frequently got skittish and took to the skies.

I suspect a Peregrine was the cause on some occasions as later that morning we clocked one terrorising the lagoons residents from up high but we did not witness a kill.

During the morning we met up with a few more of the regular birders ( John and Phil). The two of them were lucky enough to see a  female Merlin perched on a post near the Seawall hide.Its great to have these falcons visiting the lagoons again. Perhaps the influx of spring migrants will keep them attracted to the reserve.

One of our star attractions at the moment "Flossy" the Glossy showed first in the morning as usual and then dropped in 12 pm that was quite out of character as usually it flies west in the morning and does not return until dusk. 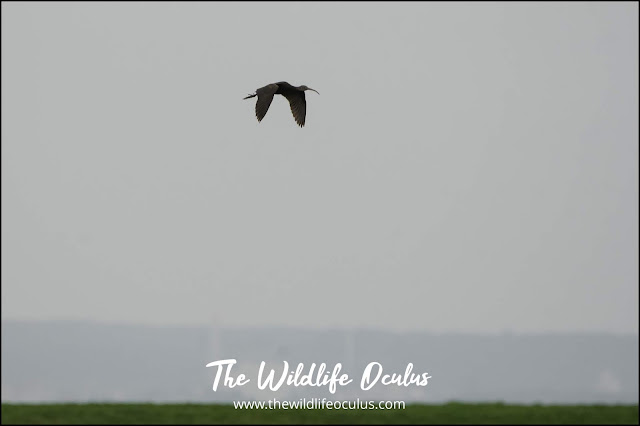 As ever it was good to watch. Its quite a strange bird for Goldcliff and at the moment it does not seem to show any signs of moving on.

For the first time I got to see one of the foxes. It was sat on the pill wall watching the birds. It bet it was salivating seeing all the potential prey. Thankfully the NRW have surrounded the lagoons with electric fencing to safeguard the birds. They also check it regularly. Without the fence and their continued maintenance and monitoring we would not have the wonderful bird haven we have. 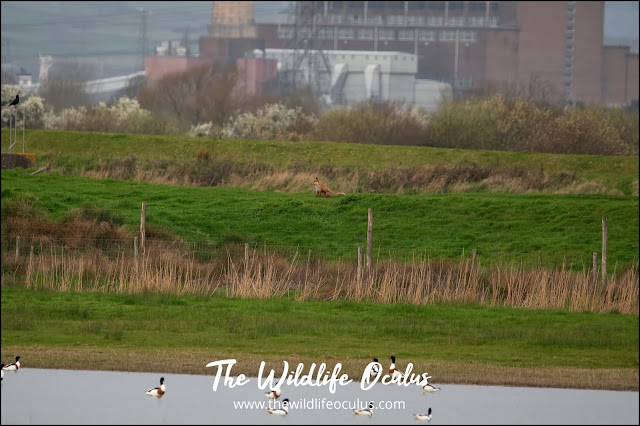 Wheatears were showing again. If you were lucky you would catch sight of them throughout the reserve and particularly in the vicinity of the sea wall. Another early migrant seen was a small group of Sand Martins which passed us as we watched Godwits.

The aerobatic displays of Godwits, Avocets, Knots and Lapwings did not stop all morning. It was one of those days that I will remember for a long time. 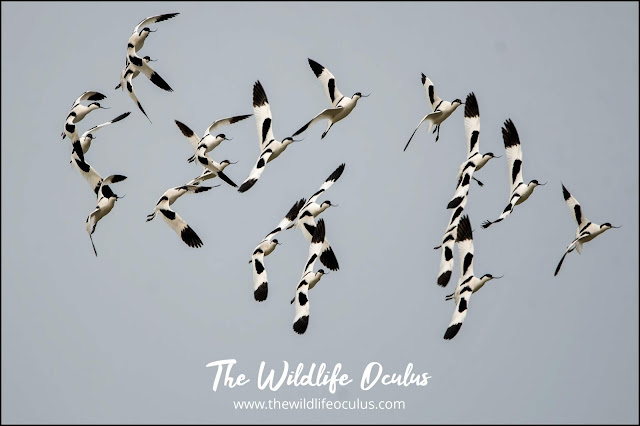 In my eagerness for more I was up early today - a 5 am start- I got up to try and get a second helping of wader magic and also catch a sunrise.

Goldcliff is a fickle old place. It can change from one day to the next. No two days are the same.

At dawn I found myself on Goldcliff seawall waiting for the sun to rise. I just wish the band of cloud that was being pushed out had shifted thirty minutes earlier. It would have made better pictures. Nevertheless it was a sight for sore eyes. 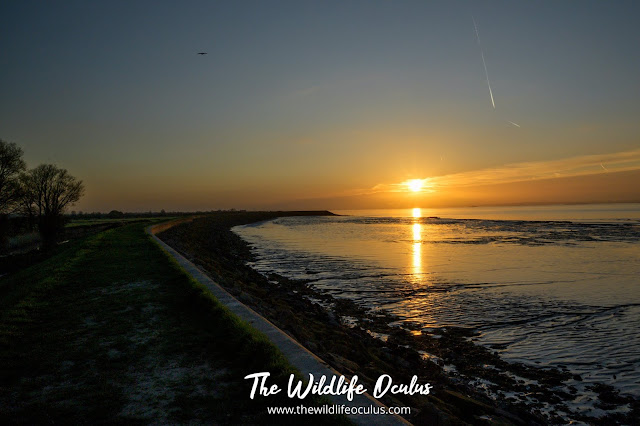 By the time I walked to the lagoons the sky was a glorious blue and the lagoons were lit in that lovely morning sun. It has a gold hue to it and everything looks kind of brand new and fresh.

It was relatively be-calmed compared to Saturdays events. The Godwits were huddled together on Monks ( Lagoon 1) accompanied by a solitary Ruff. The Knots were tightly packed together at the end of the Island. Everything was quite subdued. I spent some time making videos of the Knots preening.


There were plenty of birds to see. A Wheatear perched on a post in front of the platform I was sitting and a Reed Bunting was going for it singing his heart out behind me at the top of a Hawthorn tree. 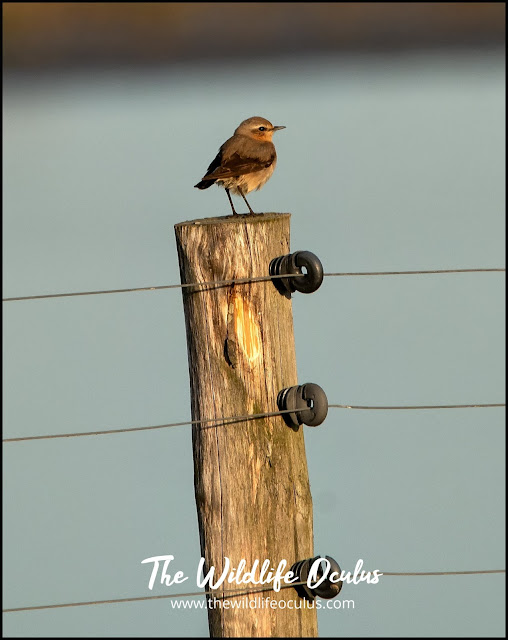 All in all it has been a fantastic weekend at Goldcliff Lagoons with over 50 different species recorded. The place just keeps on giving.