I've been spending quite a bit of time recently at Goldcliff because there have been some monster high tides in the morning and I have been helping out with Curlew Monitoring. We had been hoping that the local population of Curlews would be forced from their shoreline and saltmarsh land high tide roosts when they flooded and that these wonderful waders would get pushed instead by the rising tide to the lagoons.
I have been helping Mike Smart from the Call of the Curlew Project to identify color-ringed Curlews and particularly those known as head-started birds. The head-started birds are Curlews that have been bred as Slimbridge and released onto the Severn Estuary. They have special numbered rings. Unfortunately, the head-started bird rings are not easy to read at a distance. There are also Curlews with colored rings that were ringed as a result of a ringing Operation that occurred in 2015/2016 in the Peterstone area. 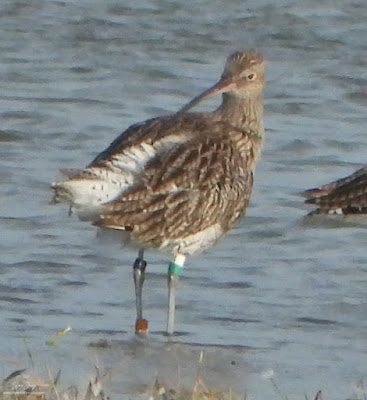 Over a couple of days of observation at High Tide between us, we managed to see ten color-ringed birds from the 2015/206 catch and one Slimbridge head-started bird. In all, we must have seen four hundred Curlews. A very impressive flock to see on the lagoons.
It was interesting to note that in with the Curlew came at one stage up to nine Bar-Tailed Godwits
I really enjoyed taking photographs to help out Mike and it gave my visits to Goldcliff Lagoons some additional purpose and its good to think that perhaps I am helping in a very small way the monitoring and conservation of this enigmatic and sadly declining species of wader.
Learning about the history of ringed birds I find very interesting and have decided to now add an additional page to my blog entitled "Ringed  Birds at Goldcliff Lagoons" and intend to use it as a reference and archive concerning ringed birds observed at the reserve.
On the second day of observeing the Curlews at high tide, they landed on both Becs and Monks Lagoon. Again several Bar-Tailed Godwits came in with them.
The following days of obsevation they only landed on Becs Lagoon.
Overall I think the highest count was 437 birds which is an impressive sight but its also quite sobering to think that this species is in severe decline and imagine what numbers there would have been hundreds of years ago.
It appears that the Curlews only come in and use the Goldcliff Lagoons to roost in large numbers when the saltmarsh near the pill becomes flooded.
Labels: Colour-Ringed Curlew Goldcliff Lagoons