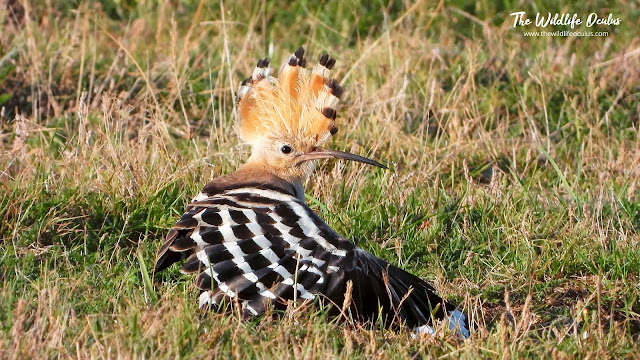 On Thursday afternoon the news of a Hoopoe having been sighted in a field at Sker Point, near the Kenfig Nature Reserve in Bridgend had hit the birding Social Networks like wild fire. I was sat in the seawall hide at Goldcliff when an alert popped up to inform me that a keen eyed South Wales birder Strinda Davies has found the bird in a farmers field.

I left the hide and walked up onto the seawall and looked West and started thinking excitedly.  I did what I  I am sure many birders, toggers, twitchers, photographers , or whatever you want to identify  yourself  as,  do when preparing for the trip. - planning. My wife prefers to call it "scheming". I guess she is right. I think about all the good excuses to justify going - its a rare bird, its not far away, a lifer I have never seen one, I am off work ( really good excuse), I have been good all week and done all my husband chores ( not so good as I am probably lying), its going to be a nice day, I will be back to work next week and the grind stone (appealing for sympathy - I don't get that often) and so on and so forth. None of these usually work on my long suffering wife and she usually rolls her eyes and leaves me to get on with it - as long as I don't drag her along to stare at some bloody bird in a field at the crack of dawn!

I went to bed and I swear I was dreaming of being lost in an endless sand dune landscape ( probably because I watched the new Dune Trailer before bed) and that I could never find my way out off the dunes to reach the Hoopoe. Just as I was about to escape the dunes - the 6 am alarm clock went off and scared the pants off me. Time to get up and go.

Just after 7am with the sun rising up above a layer of clouds I was marching through the Kenfig Nature Reserve car park and trying to follow Google Maps using the coordinates my friend Rich had put up on Twitter. My phone took me through the Kenfig Golf Course. I huffed and puffed over several fairways, ducked to avoid any overhead golf balls and then ended up walking up some old sand dunes!Oh no  I seemed to have been walking miles and started to think my dream was coming true. But then I reached a track next to a big bright yellow house - Sker House.

There was a solitary birder checking out a field next to a farm that was being renovated. We had a chat and  I was pleased to get confirmation I had made it to the right place. The Hoopoe however was no where in sight. Apparently I was told it was seen flying off to roost in the bracken the previous evening so now it was going to be a case of playing the waiting game.

So I waited and waited but there was no sign of the bird. More eager people had turned up and there was plenty of eyes now on the field. The sky had turned a wonderful blue colour and I began to get impatient. I decided to go for a walk and check out Sker Point and see if there were any waders. Hopefully by the time I had walked to the point the Hoopoe would have turned up.

As I walked to the point a Kestrel flew over my head and put a big flock of Linnets up into the air. Stonechats were perched up along a boundary stone wall and there were even Swallows swooping around.  I then reached the point. It resembled to me something like a moon landscape. A flat area of rocks , Sker is a viking name and literally means "rocky island where no one can live  also known as a Skerry".

I scanned the rocks on the shore line and spotted a flock of Oystercatchers and Curlews. I love my waders and thought I would take a closer look and grab some pictures. Next thing I am almost at the shoreline when my phone starts buzzing with alerts. Typical isn't it- the Hoopoe had only decided to put in an appearance- when I was clambering over half a mile of a lunar landscape carrying ton of photography gear.

I tripped and stumbled back the way I had come and then ran ( well tried to for a few hundred meters - actually probably more like ten , I am not as fit as I used to be).

Enroute one of the local birders walking his dog said he had come down to let me know the Hoopoe was back, which was really nice.

A short time later I was gasping for breath , sweating streams but I had made it back to the field where the Hoopoe was.

There was a small line of people aiming big lenses and scopes at a small bird in the field. For some reason I had imagined Hoopoes to be big - like a crow but in reality it was not much bigger than a Blackbird. Any similarity to a Blackbird however ended there - this bird - The Hoopoe had incredibly striking plumage and one hell of a big beak. In some regards it reminded me of a Woodpecker combined with Curlew , a Waxwing and a Zebra!

It was only about ten meters into the field from the birders. Pretty close indeed.

I could not believe it and I could not help hooting a little under my breath "Hip Hip Hurray - or should it be "Hoop Hoop Hurray".

What a sight to behold. A new bird to add to my all time bird list - a lifer as birders call such sightings.

Hoopoes are rare visitors to the UK, although there apparently  can be up to about one hundred a year turning up all over the place. They are normally found on continental Europe where they breed in the summer months. They then migrate south to as faraway as Mid and Southern Africa. I have heard all kinds of stories from my friends who have seen them in parks and playgrounds in Spain, Majorca, Lanzarote and Africa.

So seeing one in a farmers field in South Wales with a flock of sheep is pretty awesome.

It was quietly feeding on insect larvae - mainly leather jackets ( crane fly larvae)and some worms. Now and again it was joined by Meadow Pipits and Wheatears. If these little birds got to close it would display its amazing crest and flash its black and white coloured wings. Now that was just fabulous to watch. The Hoopoe looked amazing. The crest reminds me of a bird equivalent of a Mohican . The display seemed to do the trick and scared the other birds away from its patch.

The Hoopoe was very accommodating and did not seem bothered by the "paparazi" who were now gathering in greater numbers with more reports of its re-appearance hitting Twitter.

Even then when the farmer turned up and staring herding up the flock of sheep with his two dogs the Hoopoe did not even move.

It always maintained that certain kind of comfortable distance and as long as we respected that , the bird was happy and very settled.

Before long I had taken several minutes worth of video recordings and lots of pictures. Now it was time to have a rest and chat with the small company of birders that had turned up.

On twitches like this one it's always great to meet up with people you only ever usually socialise with on the various birding social media groups.

Everyone who turned up was very friendly and helpful which is always nice when you visit new places.

I really enjoyed chatting to several people who read my blog- @Frank, @matt and @Nerdbirdyblog - nice to meet you all.