Earlier this month I went on a day out with my friend Paul Joy and we visited Newton Point, Porthcawl. This is an area of coastline that is situated alongside the Trecco Bay Holiday Park site ( hosts an incredible number of mega static caravans). The point consists of a rocky penininsulua  that lies between two sandy bays.
View Larger Map

In order to access Newton Point you can drive through the Trecco Holiday Park and you will eventually get to the free public car park. The location is very popular and during the holiday periods and weekends can be very busy with people. Anglers enjoy fishing off the rocks of the point and people love the beaches. Its also a very popular place for dog walkers and frustratingly many owners allow their dogs to roam free.

I know we all have got to share the world but I am just warning readers you will have to live with the fact that dogs and the oblivious owner may disturb any roosting waders you have been planning to watch and photograph. Sometimes it will work out and the birds will fly when disturbed closer to you but on many other occasions they will fly far away and frustraingly, exactly where you are not!

Paul and I arrived approximately two and a half hours before high tide.We had devised between us a cunning plan. The first part of our  plan was to locate some waders that may have started to gather for a high tide roost and then position ourselves at a respectful distance so that we did not cause them any distubance. 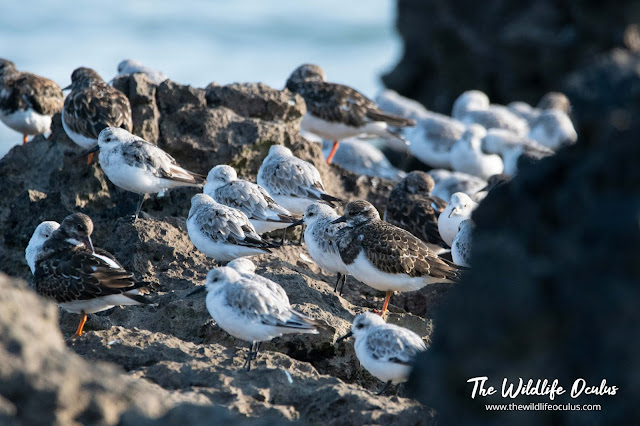 The second part of the plan was then simply a matter of patience. We were going to play the long game. If we waited in our spot rather than chasing the birds around and causing them unnecessary disturbance, we hoped they would instead come to us as the tide would rise and push to roost directly in front of us.

All we had to do was get setup with our cameras and sit patiently. Now being patient can be the difficult bit and you need to resist the urge to move closer.The pair of us had a lot of banter about that and both succumbed every now and then to edging that little bit nearer the birds.

I have this habit of looking  down my camera to watch the birds entranced by my passion for the little balls of feathers , whilst talking "at" Paul assuming he is listening to my every word sat next to me, only to discover ten minutes later I have been talking "to" myself as Paul had sneaked up even closer and left me to it. In my case I just sit until he is speaking to his wife on the mobile phone coming up with all kinds of excuses as to why he is going to be late for tea ( he usually blames me) and then I make my move when he is not concentrating :).

Joking aside, in the end good sense and respect for the birds won out and we found a really nice position to view the birds and stayed put. I must admit its a great experience to have with a good friend, sunshine, sea air and being sat ten meters away from a flock of waders that are just doing there thing. Great birding and also a wonderous opportunity for close up pictures and video of birds I rarely ever see close up. Normally at Goldcliff waders are just little balls of fluff half a mile away.

The waiting around sat (or lying as in the picture) on the rocks does have its drawbacks. Your backside  and joints start aching after an hour and then it gets into your bones. However a little discomfort paid off in the end  and as high tide approached we were sat in front a nice flock of Turnstones and Sanderling that were preening and sleeping a mere 10 to 12 meters away from us. In comparison to us there were quite comfortable. They occasionally jostled about, moved  ever closer to us as the tide pushed them up and in between sleeping on one leg they would start to preen their feathers.

They seemed to have accepted our presence and very accommodating. At one point they started to bathe in a rock pool and it was just great to watch them do natural things without being disturbed by us. Obvioulsy they always had one eye on the watch out. They scanned us and especially the skies above them for predators. There was an angler fishing nearby and the birds were not in the slight bothered by him and very accepting of his presence.

I was over joyed to see so many Sanderlings. Previoulsy to this visit I had only ever seen a a very small number of these wonderfully cute waders at Goldcliff Lagoons and at considerable distance.

I felt blessed that they tolerated our presence for so long. The Sanderlings have incredible plumage. Adult birds are very "BOLD Ultra Bright" white coloured with some grey on the wings and black shoulder markings. Juvenile birds however have a checker board black appearance to their backs and look very striking. Some juveniles have some creamy brown markings as well and can be easily mistaken on some occasions as a Little Stint ( and yes I have been one of those mistaken!).

The Turnstones however have plumage designed to camouflage themselves on the rocks. They can be easily missed even close up as they just blend with the rocks. Turnstones are another species that I have rarely seen close up. In recent times I only saw a few close up on a beach on Norfolk and in the distant past their was one occasions when I was visiting Myrtle Beach in the United States where they were so tame they ran between my legs.

Paul and I watched the waders for hours. The only thing that disturbed them from their roost was when a Peregrine Falcon swooped in on a an attack run - that ultimately failed but caused the flock on further up the coast. By then my friend and I had almost filled all of our memory cards with lovely images and after hours of sitting on the rocks has lost the feeling in our back sides and needed a stretch and a walk.

Sunset was soon approaching and so I decided to put my DJI mini 2 drone up and capture some of the spectacular scenery. The technological marvel caused a bit of a sensation amongst some of the friendly onlookers who were amazed at what it was capable of. It was my first time to fly the drone over the sea and it worked like a dream and captured some amazing views of Trecco Bay , Newton Point and the Holiday Park.

Paul and I had an absolute amazing time and really loved the place, so much so that we vowed to return again in the near future.