I finished Part 1 of this two-part blog post vowing that I would return again with my friend Paul Joy. Well, I certainly kept to that pledge, and just over a week later I was clambering across the rocks at Newton Point to try and find a suitable place to set up camp near some roosting waders.
On this occasion, the high tide was due in at mid-day so we got down to Trecco bay early in the morning after filling our bellies with a Gregs to set us up for the busy day ahead.
The seafront was pretty quiet compared to our last visit as the holiday season was over and the kids had returned to school.
We scanned the area with our lenses and soon picked up some Turnstones roosting on the point. We initially started watching them but a big flock of Sanderling and other waders soon caught our attention roosting on rocks on the Trecco Bay shoreline near the sandy beach.
Running along some of the exposed sand were Sanderlings. They look just like wound-up clockwork toys as their little legs seem to move at about 100 mph as they feed busily alongside the sea.
Paul and I headed in their direction and began to carefully approach them moving slowly across the rocks until we found a comfortable spot to sit.
Both of us were able to get within about 15 meters of a big flock of waders. The Sanderlings really stood out with their "bold ultra-bright" plumage and there was a nice sized flock of about forty birds. They however were the minority species as surrounding them was a large flock of 100+ Ringed Plover and Turnstones. To the rear of them was a flock of about twenty Oystercatchers and Black Headed Gulls with the odd Herring Gull mixed in.
When we scanned the flock even more we discovered mixed in with the main flock were Dunlins. The birds were very accommodating as long as we did not move much and kept a respectful distance. As the tide moved in it pushed the flock even closer to us. I have never been so close to waders like this in my life.
Whilst the birds were used to our presence they were not too keen on anyone else - especially dog walkers. Whenever a person started to approach where we were sat I would wave my hands and gesticulate to them to move away as nicely as I could. Thankfully whatever I was doing seemed to get the message across and they moved away and changed their direction giving us a wide berth.

Apart from the threat of the occasional inquisitive walker or ignorant dog walker, it was very quiet and ideal conditions for watching the waders do their thing undisturbed.
As time went on more flocks of waders came in resulting in growing numbers of Sanderlings and Dunlins and some opportunities for flight shots.
When the tide eventually began to turn, Paul and I really needed to stretch our legs as the rocks make your backsides hurt after sitting on them for hours.
I noticed that a small group of waders had taken to the sand as the tide receded and were starting to run up and down the beach to feed. I seized upon this opportunity to try and photograph them close up as they fed. It's great to see them in different circumstances from when I normally watch them at Goldcliff when they are perched in a lagoon half a kilometer away.
As I lay on the sand in wait for them I noticed the bane of my life approaching me along the beach. A dog walker. The turn of the tide was now revealing a nice sandy beach that was attracting more than just birds.

The dog walker must have seen what I was doing but did nothing to stop his dog from chasing the birds along the shoreline. On this occasion very briefly it worked to my advantage as in effect the dog herded the small group of Sanderlings and a solitary Dunlin towards me. I managed to grab a few pictures before they then took flight and flew off to the other side of the point. I could not help myself and gave the dog walker a real death stare. He seemed completely oblivious to his actions. I think a lot of these dog walkers are just plain ignorant more than anything but there is a small minority who are just rude and selfish.
I scanned further ahead for new targets to acquire and was rewarded after a while with a sighting of another flock of waders that were scurrying across the sand near the RNLI lifeguard end of the beach.
Paul and I headed in that direction. Once again I got frustrated with inconsiderate dog walkers who allowed their "pack" of dogs to run amok on the beach scaring everything away. Paul headed back towards the point as he planned to try a method of "waiting for the birds to come to him| technique rather than my "find and sneak up approach".
I checked out the headland near the RNLI building and found some Rock Pipits and Wheatears to watch for a while before I started to make my way back.
When I next got back to the beach I found it deserted of people apart from a young couple who were having a mini domestic and an RNLI "Baywatch" type lifeguard who was sat in her cool looking 4 x 4 talking to another lifeguard on a Quadbike. Now they seem to have a great job!
The tide had receded even further and as I walked across an area of shallow rock pools and seaweed-covered sand I suddenly realized I was surrounded by small waders. The place was alive with Ringed Plovers, Sanderlings, and Dunlins. I knelt down, amongst them to reduce my profile and then enjoyed the show. Many were too close to me to even focus on.

The birds were totally comfortable with me as long as I was quiet and did not move. They then began to feed in front of me. It was an incredible experience. I must admit I was pretty much enthralled by it all and in my own world. I was so oblivious to anything else it was only once my leg went completely dead and my knee felt like it was going to give in I had to stand up. It was then that I noticed some bloke stood 3 meters away from me who seemed to have a fascination for staring into very shallow rock pools and splashing them with his flip flops. He was totally unaware of the birds moving practically around our feet. Despite me trying to drop him a huge hint by flashing my camera at him and pointing at the birds he remained doing his own thing and soon the birds lost their tolerance of him and began to fly off.
By that time I had enjoyed over thirty minutes of wader bliss and it was time to go and meet up with Mr. Joy again.
When I met up with Paul he too had similar experiences to report. Both of us were in despair at times with ignorant people's attitudes. Paul recounted a story of when he had sarcastically thanked a lady whose dog had run straight at a roosting flock of waders that Paul was very obviously watching. She approached him later and enquired as to why he had thanked her. Paul explained what she had done and she apologized.
Perhaps on more occasions than not it's just people are completely ignorant to the fact that they share the coastline with birds. The nicer side of me would like to imagine that once people have been educated about the birds they may disturb with their dogs, they may have second thoughts next time.
Nevertheless, I don't want to detract from the fact that we had a fabulous time at Trecco Bay and the dog walkers are just something you have to deal with and the majority of people were very accommodating and friendly to us and were genuinely interested when we told them what we were photographing.
Yet again another amazing day for birdwatching that will live long in my memory. 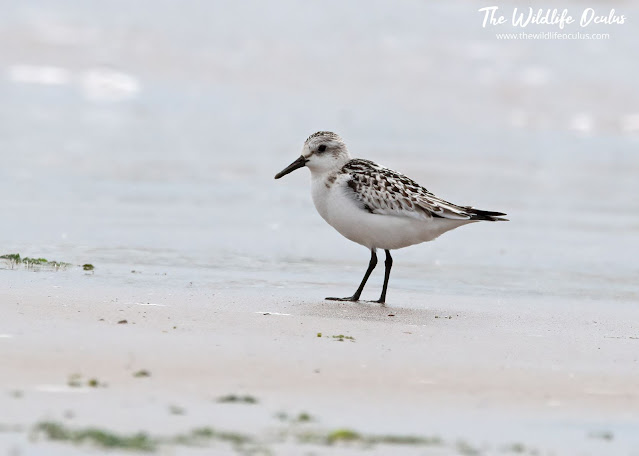