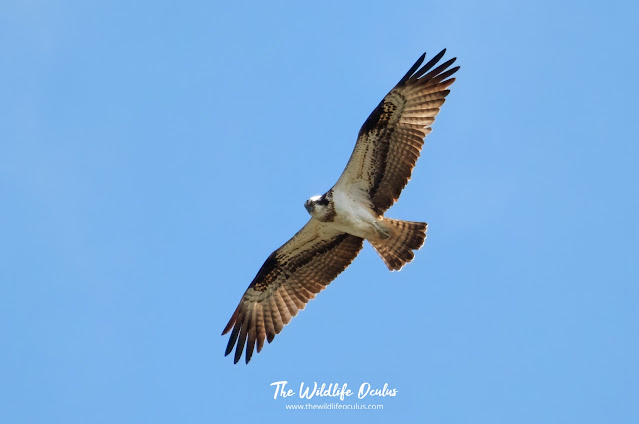 I just had to put together a quick post concerning Sundays fantastic visit to my local reservoir and the Osprey that put on a good show.

This was the third time I have seen an Osprey at Llandegfedd and this time I had the most prolonged views I have ever had albeit at a distance.

I used to visit the reservoir regularly with my father who was a great trout fishermen. I must admit I was hopeless at fishing but what I did catch from my father was a love for wildlife and being outdoors. My father was no expert on  birds but he rarely missed anything and was constantly pointing birds to me. He had incredible eyesight and awareness. One of the things he would often say to me when we were floating in one of the fishing boats would be "Son, one day you will see an Osprey fishing here". I must admit I always think of him saying this when I visit the "res" or "Lake" as Welsh Water now like to call it.

I had heard that the Osprey had been sighted when I was down at Goldcliff so I had travelled up specially to the North End and parked the car in the Fishermen's Car Park. I met up with one of my birding friends Gavin Vella, who had spotted the Osprey and was later joined by two other very keen Gwent birders. There was now plenty of eyes on the sky now.

I must admit I was very glad to have Gavin's super sharp eyes on hand. Honestly he has got eyes like a hawk and can make out the smallest black dot in the sky and tell you what bird it is.

So when he started getting excited and telling me it was flying in our direction I just pointed the camera where he told me and waited for the bird to appear in my lens.

We stood there watching the Osprey at distance most of the time but at one point it flew around us in  circle . Whilst it never got to the glory of frame filling views it was nevertheless in range for a better than record shot quality picture.

The weather was crazy. I am sure we experienced four seasons in an hour. At one point we were watching the Osprey dive into the water during a hail storm. I must admit seeing an Osprey remains a rare experience in Wales like this and I will always treasure the memory.

I cant wait to show my father the pictures when I see him next.