Sunrise up the Blorenge

I have been spending some time recently in the Gwent Uplands. The Blorenge , Pwll Du and the Gilwern Hill areas offer breath taking vistas and are absolutely teeming with wildlife.
On Thursday morning I arrived at the Foxhunter Carpark about thirty minutes before sunrise. I began a quick march along the mountain track hoping to make it to the ridge that overlooks Abergavenny before dawn. But I had to change my plans due to a few issues. Firstly I forgot to take my tripod out of the car and had to run back for it and then secondly I underestimated how long it would take for me to get to the ridge. I ended only making it to the summits trig point.
I needed time to get all set up all my kit. I had brought my new toy along as well. I am now a proud owner of a DJI Mavic mini 2 drone and was eager to give it a go.
Looking East the sky had turned an incredible orange colour. The sky was not quite clear as there was a partial veil of clouds. All this added to bounce the orange light round to give everything a fiery glow.
It was perfect conditions for doing silhouettes.

Then it was just a case of waiting for the sun to rise. The view from the top of the Blorenge is tremendous and I would argue to be one of the best in Gwent.
As the sun began to rise I could hear the calls of Red Grouse that were unseen hiding in the heather. The grouse sound amazing as they kind of make these "burbling" noises at each other.

Once the sun was rising higher it was time to switch from my traditional camera kit to the drone.
Since purchasing the drone I have undergone the Government training, registered it and obtained an operators licence. There has been alot to learn , especially around the restrictions and rules that you must follow in order to fly it safely. I must admit it all makes common sense and I think as long as you are careful and considerate you can fly the drone safely and minimise disturbance - especially to wildlife.
The drone went up high above the  summit and I got views of the surrounding landscape I would have never previously achieved. The little flying marvel sounds like a big buzzing insect but it did not cause any noticeable disturbance. The grouse continued to call and the Skylarks began to sing.

As the sun rose further into the sky it was time for me to move on and I strolled back to the Foxhunter Car Park. Along the track Skylarks exploded into the air singing whilst on the air and then descending rapidly to perch either on the track , a stone or a prominent heather bush. Once composed they would raise their crests and start singing again.

Meadow Pipits were in huge numbers and every time I walked a couple of meters I seemed to disturb a few of them that had been perched up along the track. 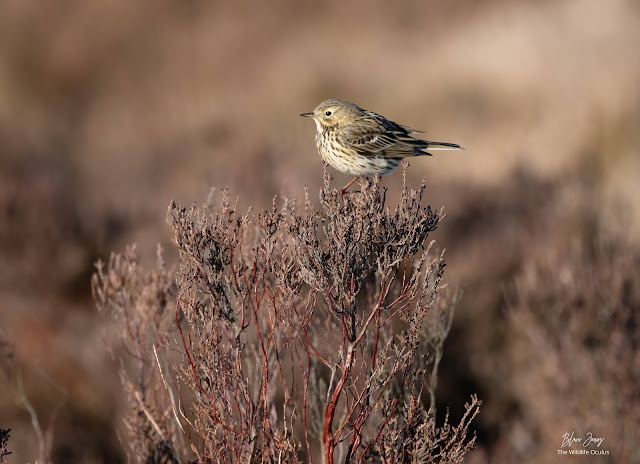 A pair of Ravens hurtled past and then circled me as if in total curiosity before they flew off satisfied I was not some kind of threat.
It remained early in the day and so it was time for me to go and explore some of my usual haunts across the mountain.
At this time of the year I like to look for Wheatears. These summer migrants fly all the way to the Gwent Uplands from as far way as Wester Africa. Incredible for a bird that ways only at most 30 grams.
I got some lovely views of these beautiful birds as they fed on insects in the grassy areas and then they would perch on stone walls where they would survey their territory and keep an eye on an enthusiastic birder who was commando crawling towards them.
A highlight of my wanderings was coming across a female Black Redstart. I will be the first to admit I thought at the time it was a Common Redstart, as that's what it should have been really in the place I found it. I won't be revealing where it was as it may be breeding in that location. I will report the details  later to the county bird recorder once the breeding season is over. No offence but I don't want to cause it any unnecessary disturbance.
I finished my morning off with lovely views of a male Kestrel that was perched up on a pylon overlooking the tumble.
It was quite happy to pose for photographs whilst I sat in my car with the camera.
Now it was time to head home. The area attracts lots of people and gets far too busy for my tastes during the day and I find the wildlife tends to stay out of the way as well until later in the evening.
Labels: Black Redstart Blorenge Gwent Uplands Kestrel Skylark Sunrise