The icebox and the scarlet pimpernel.

I must be glutten for punishment. Last weekend I spent some serious time in the Sea Wall ( Avocet)hide at Goldcliff aka "The icebox". I swear it was five degrees warmer outside the hide . Inside I think my home freezer was warmer. The prevailing North wind has been whipping across the reserve and blowing through the hide windows to bone chill anything in its path.

The problem is I cant help but want to be in the "Icebox" as there is a huge flock of very enticing Black Tailed Godwits that has a tendency to every now and then explode into the air, and the waders put on a most wonderful and colourful aerobatic display.

So, yet again I have found myself drawn to the reserve and ended up enduring a couple of hours in the seawall hide. Walking around the reserve after being sat in below zero temperatures has been very welcome just to warm up.

This weekend I have been joined by the usual band of stalwarts and a few faces I have got to know from over the last year on Facebook , Twitter and followers of my blog. Its always good to meet people who read my blog and nice to put a name to a face.

On Saturday there was actually some sun breaking through the clouds just after dawn that lit up the lagoons providing some nice golden hour photo opportunities. Taking advantage of the early illumination was a very persistent female Marsh Harrier. She really did deserve an award for trying her hardest to catch a bird for breakfast.

The Marshy must have spent thirty minutes or more harrying the wader flock and hovering over the reed beds. Several times she plunged into the Priors Reedbed and disappeared from view only to rise again with empty claws. The winners of the "bravery "awards had to be the Shelducks, Crows , Avocets and Lapwings which were relentless in mobbing the raptor.

I love the chaos that a Marshy causes. The drama makes good spectating whether you are a just watching or taking photographs.

The Black Tailed Godwit flock on Saturday was exceeding three hundred birds. The majority of them were roosting on Becs Lagoons but a smaller group had decided to join some Avocets on Monks Lagoons. Their breeding plumage is looking awesome now and will only get better until they decide to migrate North to Iceland.

The field that borders the reserve and backs onto where the Snipe Platform is located has become a grazing ground for the geese hoard.  Both the Bean and White Fronted Goose were seen regularly feeding there. These rarities for Goldcliff if not found in the field were then usually on Priors Lagoon.

Up on the sea wall we were delighted to find White Wagtails putting on a good show. The rear of the sea wall was a particular hotspot ( funny really as it was not only for finding birds but also for thawing out after being inside the "icebox").

Reed Buntings, Pied Wagtails and Wheatears were also spotted frequently anywhere along the wall and the path leading down the the seawall hide.

From within the "Icebox" the Godwits entertained again when the female Marshy returned to cause havoc. It was great for a time and the banter I had with my fellow birders was great but in the end I had to throw the towel in a escape to somewhere warmer.

Even standing on the seawall with a drafty wind was better than the "Icebox". Up on the wall we scanned the saltmarsh and located the Brent Goose in with the Canadas. A short time later it flew into the reserve and landed on Priors Lagoon and then moved to land in front of the Sea Wall hide. It caused Video John ", Goldcliffs equivalent of Steven Spielberg, to get so excited he practically sprinted back to the "Icebox".

All the  excitement was too much for a certain birder friend of mine called Brian who ended up taking a  tumble later after we saw a Male marsh Harrier whilst trying to walk into the Marsh platform. He certainly won the award for best fall of the day and I came a close second for falling in practically the same exact spot.

I ended up marching off to the first hide with my friend Nev ,as every person I spoke to said " Blair have you seen the Spotted Redshank on Monks ?". No, I had not, the pesky bird has been playing hide and seek with me for ages!

I drew a blank with the Spotted Redshank and made do watching a Treecreepers nest that eagle eyed  Nev found, which became very entertaining to watch the little birds scurrying up a tree trunk, with little twigs in their beaks. Video John was quick to turn up and started filming his latest block buster.

Sunday, I walked into the reserve and was greeted by a  dogs poo bag thrown in front of the reserves entrance gate by some lazy dog walker. Absolutely unacceptable behaviour and once again does no favours to those people who argue against people increasingly demanding dog walkers be banned from  Nature Reserves. There is noticeably an increasing amount of dog walkers at Goldcliff . On several occasions I have witnessed dogs off the lead and even being taken onto the platforms and inside the hides. Not good in my personal opinion. If you really must visit with a dog, keep it on a lead, pick up and bag any dog mess and take it home to dispose of it. If you don't want to follow that simple bit of guidance then don't visit.

I think think the dog walker and dog poo issue is a national problem that is not just restricted to Goldcliff and  causes a lot of debate and its needs resolving sooner rather than later with some proper from of regulation and enforcement. I think the solutions will be challenging and require some elements of give and take on both sides. Don't get me wrong I am not anti-dog , but I am anti-poor dog owners.

The reserve on Sunday was relatively quiet.  Only until the end of my visit did I see a single raptor and that was a male Marsh Harrier skirting the Saltmarsh and it caused a separate flock of Black Tailed Godwits to fill the skies way out in the distance.

Yet again I was playing hide and seek with the Spotted Redshank. I think just about everyone who visited had seen the bird that is now moulting into breeding plumage and getting darker and better looking by the day. Not that I have seen it, I have had to look at other people pictures for a change :)

As consolation I got to see a rather spiffing looking male Yellow Wagtail that was showing almost a country mile away on the other side of Monks Lagoons. 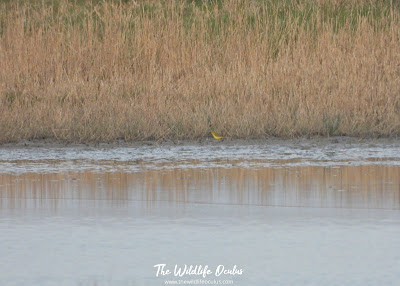 I met up with one of readers Nigel and later Mike and Jackie who were doing the wader bird count.

Once again all the geese rarities put in some sort of appearance and were attracting the attention of various birders, some who were arguing whether even they were genuine White Fronted or Beans. They discussed the possibility that were a bit "plastic" or "hybrids". I will leave that argument to those with better knowledge than me. 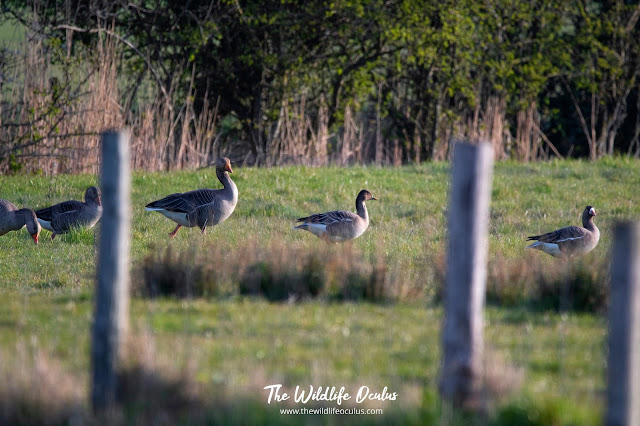 I did an hour in the "Icebox". That was quite enough. The Godwit flock were very sedentary and spent all morning roosting behind Monks Island.

It was the smaller birds that entertained. White Wagtails were all over the place and Wheatears and Reed Buntings were regularly observed on fence posts and on the sea wall. 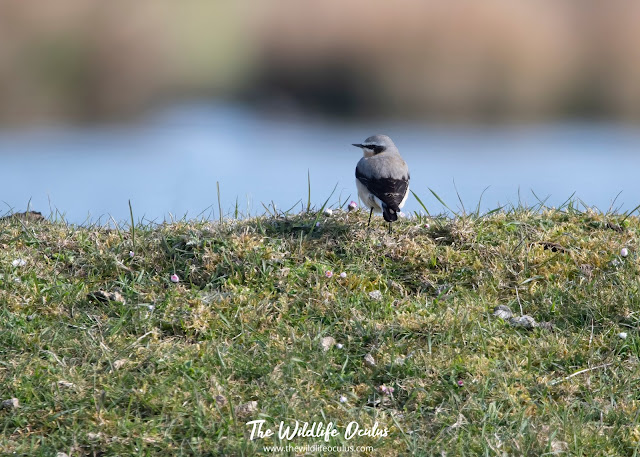 Yet again I drew a blank and ducked on the Spotted.

However as I prepared to leave Goldcliff a little bird told me that an Osprey had been seen at Llandegfedd reservoir. Now that bird did put on a show and I was quite happy to make do with a picture of that instead :)